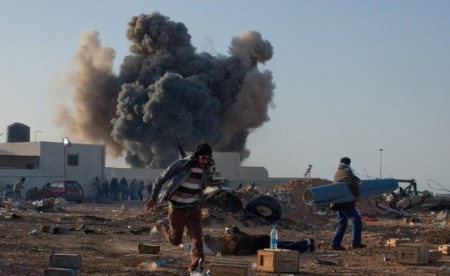 The resilience of Colonel Moammar el Gadaffi’s regime after ten days of aerial bombardment combined with the military weakness of the opposition groups has prompted Britain, France and the United States to step up involvement in the war.

With few signs of the regime’s early collapse, the need for a quick resolution is dominating the coalition’s tactics. The first public sign of that was US Secretary of State Hillary Clinton’s view – expressed at the London Conference on Libya on 29 March – that United Nations Security Council Resolution 1973 would allow the arming of opposition forces.

Opposition fighters loudly complain that their armoury – rifles, rocket-propelled grenades and technicals (light rocket launchers mounted on pickup trucks) – leaves them hopelessly outgunned by the mortars, long-range artillery and heavy missile launchers used by Gadaffi’s trained armed forces. Just as important is the dearth of trained soldiers on the opposition side: only in Misurata, which is precariously positioned between Gadaffi’s strongholds of Sirte and Tripoli, has the opposition mounted a coherent defence against loyalist attacks.

Already Britain and the USA have sent in intelligence and special forces operatives to help to target the bombs better and make more accurate assessments of the regime’s firepower. Also on the agenda, we hear, is an assessment of Islamist involvement with the Libyan rebels, following words of encouragement from Al Qaida in the Islamic Maghreb (AQIM).

The complexity of what many now see as a civil war in Libya (even if a clear majority of Libyans oppose Gadaffi) and the West’s growing entanglement is sharpening the debate. Opponents argue that the cheerleaders – French President Nicolas Sarkozy, British Premier David Cameron and Clinton – haven’t defined the mission, let alone mapped a way out. Supporters say that opposition reverses this week show the need for foreign ground troops to beef up the effort against the regime. One security source suggested that the coalition may have eased up aerial attacks on Gadaffi’s forces this week, allowing them to regain ground and so strengthening the argument for foreign troops.

Gadaffi and the Prince

No one is likely to outplay Gadaffi, a devoted reader of Machiavelli, in the cynicism stakes. His personalisation of political power, together with his armed forces and intelligence services, means that in contrast to Tunisia and Egypt, there are no military officers willing to urge him to quit. That task would be left to Gadaffi’s sons Seif el Islam, Mutassim and Khamis (whom the opposition says was killed in a coalition air strike last week).

Gadaffi’s personality will not allow him to admit defeat, especially against what he sees as an unholy alliance of Islamist insurrectionists and their naïve Western backers. His game plan looks to be a fight to the death, in the belief that the collapse of his regime will mean a huge power vacuum into which a mass of feuding tribal leaders, nationalists, reformers and jihadists will be sucked.

Three critical events on 29 and 30 March show both the speed and the fragility of changes on the ground: the rapid convening of the London Conference, attended by diplomats from 40 countries; the defection of Gadaffi’s former intelligence chief, Musa Kusa; and the recapture of Brega and Ras Lanuf by Gadaffi’s forces.

The rapid implementation of the no-fly zone, following the UNSC Resolution on 18 March, has elevated the Interim Transitional National Council (ITNC)leadership in Benghazi to key allies of the Western-dominated coalition, though only France and Qatar recognise it as the country’s legitimate authority.

ITNC officials have been received in Paris, Washington and, most recently, in Whitehall during the Conference. They were not accredited to the meeting but British officials helpfully circulated the Council’s eight-point ‘Vision of a Democratic Libya’ to journalists.

Africa Confidential interviewed several fighters on the front line in eastern Libya: most of them were engineers, lawyers, dentists and farmers but almost none had any military training. A common determination to oust Gadaffi united them. Claims by ITNC that several army units had defected proved overblown. Many soldiers who had fled Benghazi in mid-February melted back into society or quietly returned to barracks, refusing to fight on either side. The revolutionary katibat (battalions) which have done most of the fighting consist of poorly equipped, untrained volunteers.

This explains why the rebels’ initial advances were so quickly driven back by Gadaffi’s well-equipped elite brigades, led by his most capable military son, Captain Khamis, and his rehabilitated footballer son, Es Saadi. They are backed by ruthless militias, many recruited from marginalised, often black, southern Libyans and from African conflicts in which the Colonel has meddled for decades. Gadaffi has also armed his small Gadaffa tribe and larger ‘loyal tribes’, including the Maghariha. Loyalist Col. Hassan Ishkal has set up militias, as have Ahmed Ibrahim’s Revolutionary Committees (AC Vol 50 No 19).

Faced with such organisation, the opposition saw that it needed to build up military power quickly, partly by winning over defectors. The most important of these is General Abdel Fatah Younis, a leader of the 1969 coup against King Idris. He was Interior Minister until 22 February, when he moved to Benghazi as Commander-in-Chief of Libya Hurra (Free Libya).

Younis was not trusted, however, and Col. Khalifa Belqasim Haftar was appointed Commander, with Younis downgraded to Chief-of-Staff. Haftar had defected from the Libyan army during the 1980s war with Chad and joined the opposition in exile.

Less comforting for Libya Hurra’s Western allies are the links between some oppositionists and Islamist movements. In a 29 March hearing at the US Senate, the North Atlantic Treaty Organisation (NATO) Supreme Allied Commander in Europe, US Admiral James Stavridis, said that intelligence agencies had picked up ‘flickers’ of an Al Qaida presence among Libyan opposition fighters, as well as links to Hizbollah.

AQIM, which concentrates much of its fire on Algeria, said in February it would do whatever it could to help Libya’s rebels; Usama bin Laden’s Egyptian right-hand man, Ayman al Zawahiri, has sought to exploit the conflict. As Western intelligence began to look at Sudan’s Islamist regime, Khartoum denied any involvement and on 30 March said its aid was purely ‘humanitarian’.

Other Islamists are involved: this reflects eastern Libya’s long history of Islamist militancy, which was suppressed by Gadaffi in areas such as Dirna, El Bayda and Benghazi. The Libyan Islamic Fighting Group (LIFG) recruited jihadist fighters, who went on to fight in Iraq alongside Islamist forces. More recruits went from Libya than any other Arab country to fight Western forces after the 2003 invasion.

Remnants of the local arm of Al Ikhwan al Muslimoon (Muslim Brothers) have re-emerged. INTC and other sources in Benghazi are reluctant to discuss Islamist influence but we hear that the Brothers are proselytising for a Turkish-style political system of ‘Islamist rule with constitutional safeguards (see Egypt Feature)’. One Islamist source said this would become a vital issue after Gadaffi was deposed and Libyans could express their political preferences.

The breadth of the opposition – from politically secular leftists and liberals to radical Muslims – shows in the make-up of the INTC. Islamists originally opposed the Council’s Education Secretary, we hear, because of his secularist, left-wing past. The nomination was eventually accepted but Islamists want to control socially sensitive dossiers in future administrations.

Much of the fighting has been over oil export terminals along the coast, with opposition forces trying to win a critical revenue source. The ITNC wants to set up its own marketing and financial operations. The Benghazi branches of three state banks and the eastern headquarters of the Central Bank of Libya are setting up independent payment systems.

During the early weeks of the revolution, two shipments were exported from the Marsa el Hareiga oil terminal east of Tobruk, about a million barrels going to China, with the money going to the Gadaffi-controlled National Oil Corporation (NOC), but another 600,000 barrels went to an unidentified buyer in Italy, paid in cash and yielding some US$80 million for the INTC. Since then, neither side has been able to export – despite reports of Chinese and other traders descending on Tripoli with bags of cash. The INTC’s main oil advisor is Ali Tarhouni, an exiled Washington University economics professor who is lobbying to have sanctions waived on oil from fields under Free Libya’s control.

In Benghazi, the directors of the second largest oil company, the Arabian Gulf Oil Company, quickly declared for the revolution and sacked Chairman Abdel Wanis Saad Almerteja, seen as a stooge for Agoco’s parent company, NOC. They replaced him with an emergency interim committee (but would not release names) chaired by Ahmed Mujberi.

Tents in the desert

Gadaffi’s sons Seif, Mutassim, Khamis and Saadi have been prominent on the military and diplomatic front. Many are sceptical about claims that Khamis met his death at the hands of a renegade kamikaze pilot who crashed a jet into the Bab Azizya barracks on 14 March. Whatever the truth, the ‘Khamis brigade’, one of the best equipped, has remained effective.

Mutassim, who heads the National Security Council and met Clinton before the current crisis, sent an envoy to London, proposing a transitional regime (a council of loyalists and rebels) to oversee the establishment of constitutional rule. Under that plan, Gadaffi would be relieved of all effective power but allowed to stay in Libya. This might have attracted the NATO coalition or others such as the Arab League or African Union but falls short of the full regime change that Sarkozy and the Benghazi opposition seek. The Leader’s demise or exile would change everything.