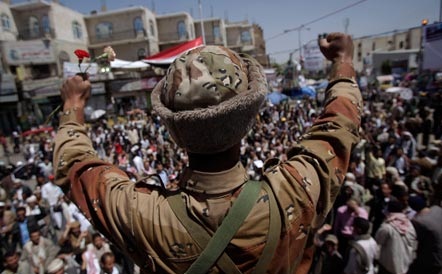 Defying a typical image of a divided Yemen without embattled President Ali Abdullah Saleh, thousands of protesters from rival tribesmen and political foes camped together, dreaming of a new country ruled by modern laws rather than tribal codes.

“We are of one heart because we all have the same demand: Ali Abdullah Saleh has to leave,” Abdulrahman Saeed, 18, a student, told the Washington Post on Saturday, March 26.

Yemen has been rocked by weeks of demonstrations that have undermined Saleh’s grip on power.

Gathering outside Sanaa University, in the spot that has become the epicenter of the uprising, dubbed Change Square, the once-privileged members of Saleh’s Hashid tribe marched side by side with southerners persecuted by his regime.

Playing the national anthem, the marchers chanted “One demand, one Yemen.”

The tide of the revolution changed after a deadly crackdown by Yemeni security forces on protestors, which left at least 50 people dead.

General Ali Mohsen, commander of the northwest military zone and Saleh’s kinsmen from the al-Ahmar clan, said Monday he was backing the protestors and himself warned of civil war if repression of protest continued.

“Once again, Saleh has become the great unifier of all the Yemeni people, this time against himself,” said Abdulghani al-Iryani, a political analyst, referring to Saleh becoming president of a united North and South Yemen in 1990.

“I can sense the camaraderie and good feelings among opposite groups, who have identified the regime as their common enemy and are now prepared to coexist with each other peacefully.”

Hoping for a new modern country, the Yemeni tribesmen were determined on overcoming decades of patronage system, used by Saleh to weaken tribes and secure his regime.

“Once, he pushed us into conflict with another tribe,” Abdulrahman Guizeika, whose own tribe had set up a protest tent, told the Post.

“That tribe is also here now. We chewed khat with them the other day.”

The new images aired from Yemeni protests raised many questions on the future of Yemen’s unity.

Western countries fear the political crisis leading to destabilizing a country on the edge of chaos with threats of northern rebellion, a southern secessionist movement and a resurgent al-Qaeda branch.

For years, Saleh dominated through a divide-and-rule strategy, which he described as “dancing on the heads of snakes.”

Playing out a complete system of patronage, Saleh granted some tribal leaders money, weapons, jobs and government positions in exchange for their loyalty.

Weakening tribes, Saleh’s favouritism helped in emboldening Yemenis loyalty to individual tribes rather than their nation, according to the Post.

Yet, living together in neighbouring tents in Change Square for over a month, year-long enmity were exposed as a part of big game played by the regime to stay in power.

Hudaiqi Ayed, a 30-year-old civil engineer, said that the government had convinced him that Houthis, Shiite Muslims who practice the Zaidi brand of Islam, were backed by Iran.

But after conversations with them he was convinced otherwise.

“They are like us. Yemen is one big family,” said Ayed, who like most Yemenis is a Sunni Muslim.

Another southerner, Abdullah al-Nigar, who called for years for secession from the north, said he will no longer ask for this.

“Saleh is the cause of the problems we face in the south. If he resigns, they will vanish,” al-Nigar said.

“We will have no reason to secede.”