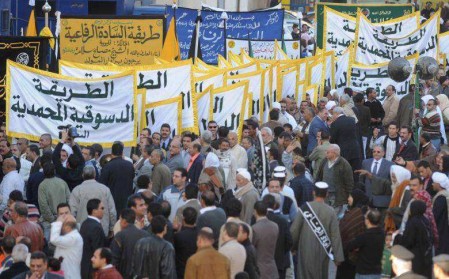 Several Sufi sheikhs called for an initiative bringing together members of all Islamic movements, mainly the Muslim Brotherhood and moderate Salafi groups, in order to serve the call to Islam and brush aside disagreements.

Several Sufi sheikhs rejected what they described as attempts to drive a wedge between Sufis and the Brotherhood. They said that in truth they agree on the teachings of the Quran, the prophetic tradition and serving the call to Islam.

The Brotherhood welcomed the initiative, saying it would contribute to the stability of the state. It added that it is ready to cooperate with everyone.

Mohamed al-Shahawi, head of the International Sufi Council, said some people try to drive the Brotherhood and Sufis apart to serve their personal interests. Regarding approach, the only difference between the Brotherhood and Sufis is that the latter reject mixing religions and politics to avoid compromising either. Both, however, are moderate and follow the Quran and tradition.

He added that the initiative had been submitted to the International Sufi council.

Mohamed Alaa Abul Azayem, founder of the Egyptian Tahrir Party and a Sufi leader, said he met with the Grand Sheikh of Al-Azhar to suggest the launch of an initiative endorsed by all Islamic movements in a conference sponsored by Al-Azhar.