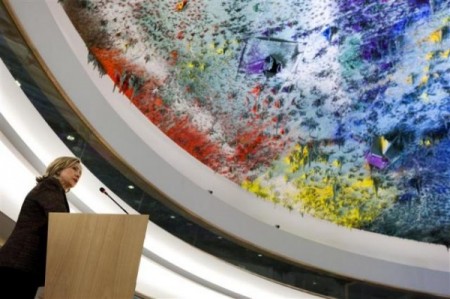 Islamic countries set aside their 12-year campaign to have religions protected from “defamation”, allowing the U.N. Human Rights Council in Genea to approve a plan to promote religious tolerance on Thursday. Western countries and their Latin American allies, strong opponents of the defamation concept, joined Muslim and African states in backing without vote the new approach that switches focus from protecting beliefs to protecting believers.

Since 1998, the 57-nation Organisation of the Islamic Conference (OIC) had won majority approval in the council and at the United Nations General Assembly for a series of resolutions on “combating defamation of religion”. Critics said the concept ran against international law and free speech, and left the way open for tough “blasphemy” laws like those in Pakistan which have been invoked this year by the killers of two moderate politicians in Pakistan. They argued that it also allowed states where one religion predominates to keep religious minorities under tight control or even leave them open to forced conversion or oppression.

(Funeral of Pakistan’s Minister for Minorities Shahbaz Bhatti in Islamabad March 4, 2011. Pakistani Taliban assassinated Bhatti, a Catholic, for urging the repeal of the blasphemy law/Faisal Mahmood)

But Pakistan, which speaks for the OIC in the rights council, had argued that such protection against defamation was essential to defend Islam, and other religions, against criticism that caused offence to ordinary believers. Islamic countries pointed to the publication of cartoons depicting the prophet Mohammed in Denmark in 2005, which sparked anti-Western violence in the Middle East and Asia, as examples of defamatory treatment of their faith that they wanted stopped. However, support for the fiercely-contested resolutions — which the OIC had been seeking to have transformed into official U.N. human rights standards — has declined in recent years.

The new three-page resolution, which emerged after discussions between U.S. and Pakistani diplomats in recent weeks, recognises that there is “intolerance, discrimination and violence” aimed at believers in all regions of the world. Omitting any reference to “defamation”, it condemns any advocacy of religious hatred that amounts to incitement to hostility or violence against believers and calls on governments to act to prevent it.

The U.S.-based Human Rights First campaign group said the new resolution was “a huge achievement because…it focuses on the protection of individuals rather than religions” and put the divisive debates on defamation behind. However, diplomats from Islamic countries have warned the council that they could return to campaigning for an international law against religious defamation if Western countries are not seen as acting to protect believers.