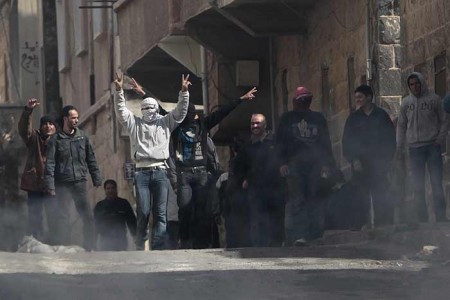 Protesters calling for freedom gathered in Damascus and other cities for “day of dignity”.

Protesters calling for freedom gathered in Damascus and other areas around Syria as security forces ordered journalists to leave a southern city where a brutal weeklong siege on demonstrations killed dozens of people.

At least 200 people marched in the centre of Damascus after prayers on Friday in support of the people of Daraa, scene of protests against Baath Party rule, a Reuters news agency witness said.

“We sacrifice our blood, our soul, for you Daraa,” they chanted as they were met by President Bashar al-Assad loyalists chanting in support of the Syrian leader.

A human rights activists, quoting witnesses, said thousands of people were gathering in the town of Douma outside the capital, pledging support for the people of Daraa. The activists asked to remain anonymous for fear of retribution.

In the capital itself, outside the famous Ummayad Mosque, scores of people were gathering.

Hundreds of villagers also marched to Daraa in support of the people there, chanting “Freedom is ringing”, a witness said.

They set off from the village of Dael near Daraa.

Joshua Landis, director of the Center for Middle East Studies

After the Friday prayers in the village, men on motorcycles and cars honked their horns while a few hundred men marched, some of them carrying Syrian flags and chanting: “Dael and Daraa will not be humilitated!”. Plainclothes security agents watched without interfering.

Daraa, the main city of southern Syria, has become a flashpoint for protests.

Officials have been on the defensive after protesters in the southern city were shot dead by police.

Security forces appeared to be trying to reduce tension in Daraa by dismantling checkpoints and ensuring there was no visible army presence on the streets for the first time since last Friday, when the protests began.

But journalists who tried to enter Daraa’s Old City — where most of the violence took place — were escorted out of town by two security vehicles.

“As you can see, everything is back to normal and it is over,” an army major, standing in front of the ruling Baath party head office told journalists before they were escorted out of the city.

Activists had called for “Day of Dignity” rallies at mosques across Syria despite a reform pledge by the government.

Syria announced that it would “study” ending emergency rule – in place since 1963 – and look into legalising political parties, a presidential adviser has said, after a week of deadly protests in the country’s south.

“I am happy to announce to you the decisions made by the Arab Baath party under the auspices of President Bashar al-Assad … which include … studying the possibility of lifting the emergency law and licensing political parties,” Buthaina Shaaban, the Syrian president’s media adviser, said on Thursday.

The current emergency law allows people to be arrested without warrants and imprisoned without trial.

Soon after the promises of reforms were made, the prisoners detained in Daraa during the protests were released. There were also reports of orders being issued by the president for the army to pull out of Daraa.

Joshua Landis, director of the Center for Middle East Studies at the University of Oklahoma, said the Syrian government appeared to be confused over how to deal with the protests.

“This is widespread. This is Syrians who are in pain, who are in poverty, who have been treated badly and the government understands that,” he said.

“Shaaban made some important statements saying no issue is taboo and the government feels your pain.

“At the same time, they [the government] crackdown harshly, and this shows there is real confusion in the government on how to deal with this.”

Rula Amin, Al Jazeera’s correspondent in the capital, Damascus, said many of the pledged measures address demands Syrians are talking about. They included a raise in salaries for all workers in the public sector and health insurance for them.

“Saying there will be a study to lift emergency law is a major step, as is the promise of a new law for the media to increase transparency.

“But will this be enough? I think for some this is a good sign, others will want more measures to be undertaken immediately.”

About 20,000 Syrians marched in Daraa on Thursday, calling for liberty. Defying a security crackdown, they took to the streets during funerals for nine protesters killed a day earlier by security forces.

The nine were among at least 25 people shot dead on Wednesday, residents said.

“Shortly after these demonstrators took to the streets, a group of armed personnel appeared to be joining them. Therefore security forces never retaliated – but in the end they handled those armed thugs. Yes, security forces used force, but against those thugs – not against peaceful demonstrators.

“Therefore, if people among peaceful demonstrators were hurt or killed in these clashes, we demand an investigation, in order to come to a conclusion.”

A witness told Al Jazeera that more than 100 people were killed. He said many people have gone missing and bodies have been dragged away from the streets.

Shaaban told reporters that ten people were killed on Wednesday, in what she called an attempt to target Syria because it supports resistance against Israel.

“What is being targeted is Syria’s position, Syria’s security and ability to be a pillar of resistance against Zionism and US schemes,” she said.

Shaaban said the Syrian government had no objection to peaceful protests, and claimed that demonstrators in Daraa had attacked security forces.

“The demands of the people are being studied night and day and Syria will witness important decisions that meet the ambitions of our people,” she said.

Shaaban said the president had chaired a meeting of the ruling Baath party at which decisions taken included guaranteeing security for the people, and a higher committee to discuss with Daraa residents what had happened and sanction those responsible.

“If there is a legitimate demand by the people then the authorities will take it seriously, but if somebody wants to just cause trouble then it is a different story,” she warned.

Meanwhile, the US condemned what it said was the Syrian government’s brutal repression of demonstrations and the killing of civilians by security forces.

White House press secretary Jay Carney said in a statement that those responsible for the violence must be held accountable and that the US is calling on the Syrian government to exercise restraint and respect the rights of its people.

According to Amnesty International at least 93 people had been arrested this month, some for their online activities, in the cities of Damascus, Aleppo, Banias, Daraa, Hama, Homs, and others.

Mazen Darwish, a journalist and activist, was arrested in Damascus on Wednesday and released on Thursday evening.

The Syrian Observatory for Human Rights also reported the arrest of blogger Ahmad Hadifa in the capital on Thursday.

The government crackdown has led to harsh criticism from the US, Britain, France and the United Nations.

Inspired by the wave of pro-democracy protests around the Arab world, Daraa residents have held protests since last week, with more planned across the country on Friday.