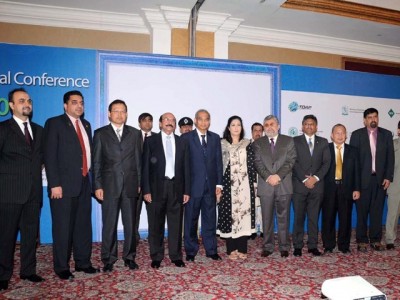 Chief Minister Qaim Ali Shah with participants at the International Halal conference organised by the Sindh Board of Investment. PHOTO: PPI

Addressing an International Halal Conference on Tuesday, Biden said, “You do not need to spend 30 years, as we want to see you emerging as a big player in the global Halal market in coming years. We are ready to share all our experiences with Pakistan.”

Biden, part of a nine-member delegation, at the Halal Conference 2011, said, “Malaysia has made some very strict laws for the industry, keeping in mind that Halal means ethical.”

He also said Brazil and Australia constitute 65 per cent of the world Halal beef exports, informing that no Muslim country had made its mark in a $2.1 trillion global market.

“What is more noticeable is that Brazil, the world’s largest Halal chicken exporter, actually exports 65 per cent of its chicken to the Arab world,” said Biden.

He explained that the mindset of consumers was changing, as people now laid more emphasis on the origin of ingredients in halal products. “Halal standards must be better than global standards like in labour laws and environmental pollution, because halal means ethical,” he asserted.

Other Malaysian experts underlined that Malaysia exported more than $9 billion worth of Halal products – a figure that is continuously rising. They explained that there are currently more than 3,800 companies in the Malaysian Halal sector that are registered with the government.

Halagel Group of Companies Managing Director Mohamad Yakob Munshi Deen said that only one per cent of the world’s gelatin production is Halal, adding that it was fortunate Pakistan produced most of this.

He said that his company had witnessed phenomenal growth, and would now turn its focus to Halal manufacturing in order to produce toothpastes and coffee.

The held conference was the commitment of Sindh Board of Investment (SBI) and Halal Industry Development (HDC), to effectively implement the memorandum of understanding (MoU) signed on December 1, 2010 with a view of developing the Halal sector in Pakistan. The conference marks the first time that the Government of Pakistan has collaborated with Malaysia in the sector.