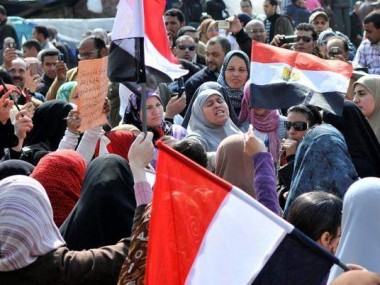 The first time Asmaa Shehata managed to free herself from conservative family rules and a mother-imposed curfew was when she slept on the street for three nights among hundreds of thousands of Egyptians protesting against their president.

“The fact that I could sleep on the street and take part in a revolution against an unjust ruler was an amazing experience,” said the 28-year-old Islamist activist passionately.

Shehata, a mass communications graduate, belongs to the nation’s oldest Islamist organization, the Muslim Brotherhood. For weeks, she tasted the flavor of this emancipatory experience alongside male Islamists.

“We, the girls, spoke to the media, arranged protests, slept in Tahrir Square, and some of us got detained. So we went through everything our brothers had gone through,” said the young militant, dressed in a brown tunic and a yellowish headscarf that covers her shoulders and chest.

This particular exposure, coupled with the ousting of Hosni Mubarak’s regime, has raised the hopes of “Muslim sisters” that they might gain further emancipation and more equality with their brothers within the organization.

“Things are changing in Egypt, and I expect a change within the group so that women can be represented within the organizational structure of the Muslim Brotherhood,” said Shorouk al-Shawaf, a 25-year-old “sister” who is active within the group.

Shehata and al-Shawaf, Brotherhood activists by descent, contend that the time is ripe for female activists to be admitted to the group’s highest echelons after decades of exclusion.

Women are believed to constitute nearly 25 percent of the Muslim Brotherhood’s members, according to some academic sources. For the past decade, women have played a significant political role, contributing to the group’s further integration within the political system.

Their conservative outlook and blimpish appearance did not prevent female members of the Muslim Brotherhood from spearheading aggressive electoral campaigns for the group’s candidates when they ran for various offices, including student unions, syndicates and the parliament. The sight of dozens of young and middle-aged veiled women in tunics carrying posters of Islamist candidates outside polling stations was a common one in the last two parliamentary polls.

Al-Shawaf recounts her experience with the group during 2005 and 2010 elections. “We had a door-knocking campaign. We used to go to people’s houses in areas where Muslim Brothers were running to explain the candidate’s platform and the group’s achievements in previous parliaments,” she said.

Despite their dedication to the group, women remain excluded from the organization’s two main decision-making structures: the Shura Council (the organization’s legislative body) and the Guidance Bureau (the Brotherhood’s elected executive body).

“I always wondered why the Guidance Bureau did not have any women,” said Shehata. “And I was told that members of the Bureau are always subject to detention and the group wanted to spare women that risk. But this was the case in the past.”

Given the rising prospects for a new democratic order, Shehata believes that soon enough this argument will not hold and that women will have a stronger voice inside the organization.

The young journalist hopes for a Guidance Bureau that includes a female leader. “A woman inside the Guidance Bureau can better understand and represent the ideas of Muslim sisters,” said Shehata.

The fall of Mubarak’s regime has elicited a heated debate over the future of the Muslim Brotherhood’s current structure. Many of the pending issues that the group had shelved citing security pressures are becoming imminent. The representation of certain unprecedented segments seems to be top of the list.

“The group’s current structure does not meet the aspirations of many segments, including women and youths,” said Hossam Tammam, an expert on the Muslim Brotherhood.

In recent weeks, tension within the group came to the surface after some angry young members reportedly threatened to hold protests demanding the restructuring of the group’s supreme bodies. However, the group reportedly succeeded in absorbing this wave of anger by expressing its willingness to hold dialogue with disenchanted groups.

“If we witness a real democratic opening, this will be reflected in the Muslim Brotherhood and in the space given to women as well as the youth,” said Tammam.

In 1932, Hassan al-Banna, the Muslim Brotherhood’s founder, established a division for females. This department consisted of the wives, daughters and relatives of male activists. At that time, the contribution of women remained limited to charity work and social and educational activities.

In the wake of Gamal Abdel Nasser’s crackdown on the group’s male leaders in 1954, women began to assume a more crucial role. They took it upon themselves to provide financial and moral support to the families of the detainees. However, they did not become intensely politicized until prominent Islamist activist Zeinab al-Ghazali joined the group in the mid-1960s. This political engagement proved to be highly costly when Nasser’s regime accused the group of plotting a coup and arrested thousands of members, including al-Ghazali and tens of women.

“Hence, women’s political role began to take shape, yet it did not last for long,” said Tammam. “Security pressures and the proliferation of Salafi thought within the group since the 1970s contributed to preventing women from playing a true role within the group.”

Nevertheless, the group supported women’s candidacy for parliament for the last decade. In 2000, the Muslim Brotherhood fielded their first female parliamentary candidate, Jihan al-Halafawi. In 2005 elections, Muslim candidate Makaram al-Diri made headlines after having thrown herself into a heated contest against a well-connected NDP male candidate. In 2010, the brothers fielded nearly a dozen female candidates.

However, such moves served more to enhance the group’s image than to empower women, according to Tammam.

“The group wanted to challenge stereotypes about its animosity to women,” said Tammam. “Yet, it was a paradoxical move because that same female candidate that they fielded did not have the right to run or vote for internal offices.”

The group’s internal politics bear several flagrant aspects of discrimination against women. “The statute does not grant women a full membership status,” said Ibrahim al-Za’afarani, a former member of the group’s Shura Council, “and this is why women do not pay membership fees, do not vote or run for internal elections and do not assume the same responsibilities as men.”

While young female activists are adamant about the urgent need for the empowerment of women within the group, they seem not to hold a similarity progressive view on the question of women’s eligibility for the presidency.

“I myself adopt the same juristic view as the group that a woman cannot run for president,” said al-Shawaf. “The presidency is a different issue that has religious dimensions.”

The Muslim Brotherhood has antagonized liberals and secularists by holding that neither women nor Copts should be allowed to run for president. The group has explained its position, invoking juristic arguments, claiming that neither a woman nor a non-Muslim can fulfill certain duties assigned by Islam to the president.

Yet, Shehata’s position seems more complicated. From a personal rather than a religious viewpoint, Shehata believes the presidency is too much responsibility for a woman, who is by definition an “emotional” human being. Plus, Egypt’s masculine society is still far from accepting a female president, she said.

The question of the presidency to one side, the aspirations and paradigms of young women are increasingly expected to put pressure on the group’s conservative members, according to al-Za’afarani. The group’s stalwarts will eventually give in to rising progressive voices, he added.