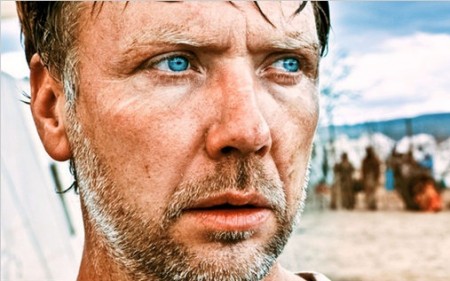 At the Oscars last month the gap between what interests Hollywood and what the rest of the world seems to be doing was sharp and clear. Of the five nominees for the best foreign-language film, all but one, among them the winner, “In a Better World,” from Denmark, dealt in some way with relationships between the West and Islam.

Richard Jenkins, foreground, is a professor who befriends Hazz Sleiman, a Syrian immigrant musician, in “The Visitor,” directed by Thomas McCarthy.

So did many others of the 65 films offered for consideration by film academies around the globe, including the French, German, Dutch and Bulgarian submissions. In contrast, each of the nine American films that were nominated for best picture and eventually lost to “The King’s Speech” from Britain were inward looking, with purely domestic concerns — a characterization that can be applied to movies as different in style and substance as “The Social Network,” “Black Swan,” “The Fighter” and “True Grit.”

“I don’t think that kind of thing is coincidental,” Susanne Bier, the director and a writer of “In a Better World,” which opens in New York on April 1, said when asked to explain the profusion of foreign films addressing aspects of the complex ties between the Western and Islamic worlds. “There’s always a kind of wave of themes” in social and political discourse, she said, “a current that one not so subconsciously addresses.”

The main character of “In a Better World” is a Danish doctor who shuttles between humanitarian missions in refugee camps in a country much like the Sudan, and a small town in rural Denmark. In both realms he is forced to confront a fundamental moral question: When, if ever, is violence justified?

But why isn’t the United States also part of that same emerging global cinematic conversation? Why isn’t Hollywood also making movies that grapple with the issues that are provoking filmmakers elsewhere? And when Arab and Muslim characters do appear on screen, why are they presented in such simplistic and stereotyped ways?

It’s not that Hollywood hasn’t made films set in the Islamic world. “The Hurt Locker” even won the Oscar for best picture last year, and “Syriana,” which won George Clooney an Oscar, and “Three Kings,” also featuring Mr. Clooney, along with Brian de Palma’s “Redacted,” also take place in the contemporary Middle East.

But in such films the focus is on the Americans characters, whether soldiers, C.I.A. operatives or businessmen, rather than the society itself or the interaction of Americans with local people and their customs. “We see everything through American eyes, without context or a representation of community” on the Islamic side, said Matthew Bernstein, an editor of the book “Visions of the East: Orientalism in Film” and chairman of the film and media studies department at Emory University in Atlanta.

Exceptions to this pattern are rare, confined to under-the-radar features like “Amreeka,” a 2009 portrait of a Palestinian family that moves from the West Bank to suburban Chicago, only to encounter prejudice in the aftermath of 9/11 and the Iraq war, and Tom McCarthy’s “Visitor.” In 2009 “The Visitor” earned a best actor Oscar nomination for Richard Jenkins, who played a widowed, depressed college professor who discovers a Syrian immigrant musician and his Senegalese girlfriend living in his Manhattan apartment and develops a friendship with the couple.

“Mine was a humanistic approach, as opposed to political or social, and I think that makes a big difference,” said Mr. McCarthy, who traced his interest in the Middle East and its complicated passions to a State Department-sponsored trip he made to Beirut to work with filmmakers there. “The spirit of the Lebanese people was so warm, engaging and verbal that it almost reminded me of my Irish heritage, and that was something I hadn’t seen portrayed in an American film.” But as Mr. McCarthy also noted, his was also a low-budget, character-driven indie film, which gave him the freedom to take his story where he wanted, without having to worry about high-concept pitches, marketing strategies or focus groups. For movies made within the Hollywood studio system for a mass market, the dynamic is very different.

“I’m not sure the industry sees a lot of box-office potential in getting these representations right and portraying Muslims or the Islamic religion in a more nuanced and realistic way,” Mr. Bernstein said. “It’s easier to simply represent everyone as fanatical and a threat to America, and easier still not even to go near it, because then you upset a lot fewer people.”

European films have been grappling with the Islamic presence on that continent since at least the 1970s, when Rainer Werner Fassbinder made “Ali: Fear Eats the Soul,” the tale of an unlikely romance between an aging German cleaning woman and a young Moroccan immigrant. France in particular has produced a flood of such movies in all kinds of genres, from the recent prison drama “A Prophet,” in which a naïve young North African prisoner learns to outwit Corsican gangsters, to “Angel A,” Luc Besson’s “It’s a Wonderful Life”-like fantasy whose main character is a petty thief of Arab origins.

The same phenomenon can be observed in Israel, where the relationship with Islam and the Arab world is both emotionally charged and existential. Two award-winning films directed by Eran Riklis, “The Lemon Tree” and “The Syrian Bride,” portray Arab characters in nuanced and even sympathetic fashion, as does “The Band’s Visit,” a 2007 comedy by Eran Kolirin about a group of Egyptian musicians stranded while on tour in Israel.

One explanation sometimes offered for the paucity of American films that engage the Muslim world is that North America, unlike Europe or Israel, is distant from the places where Western and Islamic civilizations converge or collide. In that regard, though, it may be worth noting that of the four foreign-language films dealing with such issues that were nominated for the foreign-language Oscar this year, one (“Incendies”) came from Canada and another (“Biutiful”) from Mexico.

In Alejandro González Iñárritu’s “Biutiful,” a Senegalese woman whose husband has been deported from Spain moves into the apartment of the main character, played by Javier Bardem, after his wife has a nervous breakdown, and becomes a mother figure to his two children. “Incendies,” which opens April 22, focuses on a civil war between Christians and Muslims in a country much like Lebanon and its corrosive effect on an Arab refugee family in Montreal.

“One of the beauties of cinema is that it can build bridges between cultures, and my film is a tiny bridge,” Denis Villeneuve, the director of “Incendies,” said when asked to explain what pushed him to make the film. “We deeply need communication with the Arab world right now, a dialogue other than war.”

Of course other ethnic and racial minority groups, including Hispanics and East Asians, also have long complained about negative stereotypes of them in Hollywood films. So is there a fundamental difference between, to cite two Arnold Schwarzenegger vehicles aimed at a mass audience, the portrayal of Arabs as crazed terrorists in “True Lies” and that of Colombians as crazed narco-guerrillas in “Collateral Damage”? Jack G. Shaheen, the author of “Reel Bad Arabs” and “Guilty: Hollywood’s Verdict on Arabs After 9/11,” said yes.

“Other groups are stereotyped, but there they also benefit from contrasting images,” he maintained. “I tell my Italian friends, for example, that I’d like to walk in their sandals. Yes, there is the Mafia thing. But there are also movies in which they are portrayed as funny, warm-hearted and kind people. In the case of Arabs and Muslims it’s Johnny-one-note, a continuous bombardment of negative images over and over, with nothing to balance that.”

Mr. Shaheen said he dreams of Hollywood releasing an image-changing movie that can be “like ‘Philadelphia’ was for gays and ‘The Defiant Ones’ was for African-Americans,” by offering a more subtle and humane portrait. “All it takes is one breakthrough film or television series.” Jonathan Demme, the director of “Silence of the Lambs” and “Philadelphia,” may be one candidate for such a role. He has bought the rights to Dave Eggers’s book “Zeitoun,” about a Syrian immigrant in New Orleans who was helping neighbours after Hurricane Katrina when he was arrested, and is now developing a script for an animated film version of that story.

“I feel it’s important as filmmakers and writers that we be inclusive, and that’s what is great about Dave Eggers’s book, which felt like the first in-depth immersion I’d ever had through literature or film into the Muslim-American family,” Mr. Demme said. “The moral was that they are like people of any other faith, and I hope our film, if we can get it made, will also be like that.”

Mr. Demme described the script he is writing as “a work in progress, written on spec,” and expressed confidence that when it is finished, he will be able to find financing, perhaps even from a major studio.

“It’s a wonderful, gripping story,” he said, “and we can have a very, very competitive commercial picture that won’t cost an enormous amount,” since animation provides an alternative to expensive re-creations of the hurricane.

Or perhaps a breakthrough will come from someone like the French-Algerian director Rachid Bouchareb, who has a pair of Academy Award nominations to his credit, both for films that address aspects of the difficult relationship between France and its former colony Algeria: “Days of Glory” in 2007 and “Outside the Law” this year. His next two films, though, will be shot in the United States, mostly in English, with American and Arab-American actors, and will offer new twists on genre films familiar to American audiences.

One, which Mr. Bouchareb said he is scheduled to begin shooting this summer, will be a road movie, somewhat in the vein of “Thelma and Louise,” featuring two women, one of whom is an Arabic belly dancer. The second, which he hopes to start next year, is “about an American cop and a French-Arab policeman who comes to investigate a crime, like in ‘48 Hours.’ ”

“For me, all of this is simply a pretext to talk about the relationship between these two peoples, these two cultures,” Mr. Bouchareb said recently, “This is a question that is of interest to me, and has been for a long time, but perhaps American filmmakers are still reluctant to deal with it.”