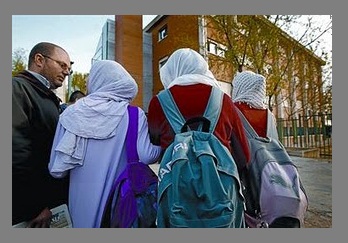 It is a fact that American Muslim youth (in a post 9/11 era) are struggling with their dual identity.

Over the last year, one question HEART Women and Girls Project has repeatedly asked Muslim girls (ages 10-18) in various arenas is, “what are the top three challenges you face as an American Muslim girl?” Without fail, we receive the following responses: (1) hijab/self-esteem; (2) bullying; and (3) Islamophobia/stereotypes. Troubling? Yes. But completely understandable as these girls share the same interests, watch the same movies, and probably admire the same fashion as others; the only difference is that they are also trying to reconcile their Muslim identity with their American one.

Heart Women and Girls is thrilled to give these girls a creative safe space to discuss these issues. Conversely, when we ask their parents the corresponding question, “what are the top three challenges you think your daughter is facing as an American Muslim girl?”, we receive three completely different answers: getting into the best college, fitting into society, and finding a suitable spouse. This disconnect can imply that parents have no idea what their daughters are dealing with on a daily basis. Is it a big deal? In the short term, probably not, but when coupled with the underworld that exists today within our Muslim youth, then yes, this disengagement between parents and their children is a significant problem.

Immigrant parents no doubt have a difficult task. I am a first generation American Muslim, and a parent, so I can say with conviction it is not easy to raise children with a deep-rooted cultural and a relatively conservative Muslim identity which flies in the face of a secular society that lives and breathes sexuality in media, music and social circles. And what makes that task even harder is parenting with eyes closed, ignorant to all of the clandestine activity and lying that youth are quite capable of these days.

Parents, you may believe the hardest challenge for your son or daughter is his/her college application, or the noble quest to find a suitable mate, but I beg to differ. Please read this carefully: you are more than likely missing the mark. Take a gander in the Q&A section of any online, instant fatwa website to find adolescents asking questions that suggest an alternate reality exists, laden with problems much greater and overwhelming than selecting a college. They want to know answers to questions ranging from whether or not ‘hugging’ is haram or halal, what officially constitutes ‘dating’, or if we call it ‘intermingling’ does that make it acceptable? They ask questions like, “Where can I get my hymen restored?, “What kind of abortion is the best?” The list goes on.

It is absurd when parents enroll their children in an Islamic school, thinking they can assign to the school their duties to raise their kids with a proper religio-moral upbringing. Boys pick up girls after school, tell their parents a later ‘pick up’ time, or make excuses to be with friends – these lies are being told every day. In many cases, teachers are powerless, and don’t interfere because the parents will start defending their children and accuse the teachers of imparting poor “Islamic social skills” to the students!

This in itself is not alarming, but concerning when this social scene takes a turn towards dating and sex. “I can show you 10 different ways we can get together and you won’t get pregnant” or “if you give me oral sex it’s not haram because I’m a hafiz,” are two different text messages a school administrator recently intercepted. The first text message reflects the sex education that our youth are either being excused from or not receiving in schools. The second text message is indicative of a young hafiz’s thought process (“I’ve memorized the Qur’an, my community adores me for it, ergo, I can do what pleases me”). When communication between parents and their children is not open and honest, this sort of alternate reality world flourishes.

It is a fact that American Muslim youth (in a post 9/11 era) are struggling with their dual identity. This struggle is exacerbated when parents do not engage in candid dialogues and offer information that is relevant to their children’s lives. This much I know from my work with young girls in both public and private school sectors. When we begin any session with a proclamation of an open and honest safe space, participants often give me a puzzled look, or challenge me with countless ‘what ifs’. The reason for this is that they have never been told before they can speak without judgment, or that their confession is ‘safe with me’.

This is precisely the problem! Tweens and adolescents absolutely need to be heard; they are at the age of experimentation and exploration. They are challenging boundaries and asserting their independence. Parents do a greater disservice by pretending that because the child is Muslim and may attend an Islamic school or youth group, he or she does not have any sexual curiosity. Rather than reward their child for asking difficult questions and capitalize on the opportunity to engage in a frank conversation, parents mistakenly reroute their child back to their rooms with the oft-repeated mandate of maintaining same-sex friends, and not attending school parties.

The lack of sex education is a perfect example of a significant challenge in a young teenager’s life, and an insidious epidemic in this country. High school students (and sometimes junior high students) receive a semester or two of sex education, but when this information is not made relevant to a young American Muslim, what good is it? That child will turn around and ask his or her friend for more information or scope the internet for details, often stumbling upon gross misinformation. Isn’t it better they learn this information from you –the parents- or from their health class at school? Unfortunately, parents have not seen the value of sex education, and they shut the door to the conversation at home as well. Leaving teens uninformed only perpetuates the curiosity and the risky sexual behavior that Muslim youth have embarked upon.

Muslim parents, examine how you groom your children into mature adults. Simply tossing nebulous Islamic guidelines and the classic “do’s and don’ts” in their faces will only perpetuate secrecy and misinformation. Remember, after your children leave your company, they still have to face their friends, many of them non-Muslim, so help your kids become self-confident and skilled in decision-making. Treat your children with respect, engaging them in conversation that is challenging, thought-provoking and intelligent. When they come to you and ask why they can not attend a school dance, rather than babbling off scripture, ask them why they think it is not a good idea. We often ask my students this question, “how would your parents react if they came to school with you for a day? Would they be surprised? Shocked? Disgusted? Would their experiences meet their expectations?” More often than not, the students say their parents would be surprised – and this does not surprise me one bit.

There are several things parents can do right away to stop the lies, secrecy and ignorance that may take over the relationship between a child and a parent:

• Know your child’s friends. Have them over for dinner, or for an after school snack. Girls like to go to the mall, so accompany your daughter and her school friends. Take a book or have coffee while they walk around, but at least you are there.

• Understand your child’s worldview. When your son or daughter approaches you with a question that makes you reach for a fatwa, take a deep breath and engage in conversation with your child. What is provoking the question? What are your child’s influences? Consider the media lens (how the media tells your child to fit into society), the peer lens, and the cultural lens, all of which impact your child’s worldview individually and collectively.

• Encourage critical thinking. Rather taking a didactic approach to parenting, consider challenging your child with the same question. If you don’t agree with prom, for example, ask your child why s/he thinks your believe it is inadvisable to go?

If there is one thing you take away from this article, it is this: Islam holds a special place for everything that is beautiful; there is no place for ignorance. While raising Muslim children in a non-Muslim society is challenging, it is an even more formidable challenge for young Muslims to turn their heads away from the sexuality, the dating, and the drugs and alcohol when this negation is not supported by their own decision making, but rather finger-pointing and a bunch of unexplained restrictions. Simply presenting Islam as a list of rules is ineffective for the children of this society. Rules are enabled to be disabled.

I am hopeful this article will anger some parents, better yet, will challenge the status quo and at the very least, begin a healthy dialogue.