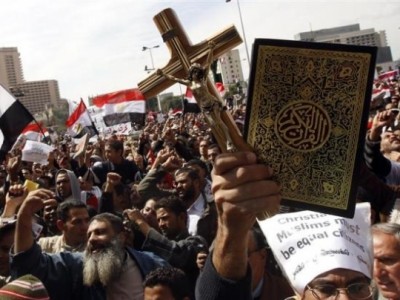 Tens of thousands of Egyptians swarmed the Tahrir Square in down town Cairo on Friday, in a march aimed at solidifying national unity between Muslims and Christians in Egypt. Several other gatherings, similar to that at Tahrir, were also seen across many governorates in Egypt on Friday, as the nation tries to get past its latest test of solidarity, following the latest dreaded sectarian incidents triggered by a rumour of an illegal affair between a Christian merchant and a poor Muslim woman in a largely conservative neighbourhood. The participants, holding banners portraying crescents and crosses, chanted long live the crescent with the cross, insisting that the great 25th of January Revolution that toppled the corrupt regime of President Hosni Mubarak was only possible due to the everlasting love between Muslims and Christians who have always been and will always remain brothers .

This came as thousands of Egyptian Christians continued their sit-in in front of the state television headquarters in Maspero, for the eighth consecutive day, demanding the immediate capture of those responsible for the burning of a Church in Helwan province, some 100 Kms south of the Capital Cairo.

The Supreme Council of the Armed Forces, running the affairs of the country since the forced step down of Mubarak 11 February, has promised to bring the perpetrators still at large to justice, and to rebuild the Church in a few days’ time.

Grand Imam of Al-Azhar, Dr. Ahmad Al-Tayeb, has asked Muslims in the village of Sol-Atfeeh in Helwan, to rebuild the Church themselves with their own personal money, stressing that Islam dictates that it is the duty of Muslims to protect places of worship of Heavenly Religions.

Christians in Egypt, who represent nearly 10 per cent of the 85 million population, are also asking for a unified law governing the construction of places of worship, away from state security and police interference when building new Churches.

Egyptians had put on a show of love and solidarity after the New Year’s terrorist bombing attack on an Alexandria Church that killed tens of worshippers. Muslims as well as Christians condemned the bombing and Muslim civilians have gone further to say they will bear the responsibility to protect Churches from now on.

People have accused remnants of the state security apparatus, and the defunct party of the ousted Mubarak, of orchestrating a counter revolution in Egypt, that led to the latest sectarian incidents in which both Muslims and Christians have died.