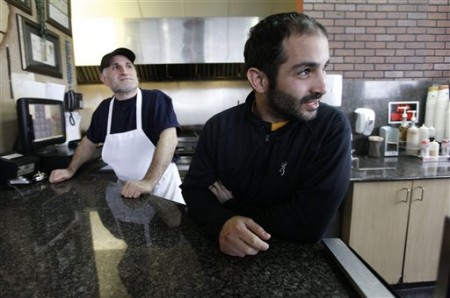 Finishing law school is a challenge for Dewnya Bakri-Bazzi, but being an American and a Muslim can be downright exhausting.

As she crammed before class this week, Bakri-Bazzi caught up on testimony from a congressional hearing on the radicalization of U.S. Muslims. She contends Rep. Peter King, the New York Republican who called it, is ignoring the positive steps Muslims have taken in fighting terrorism since the Sept. 11, 2001, attacks.

Bakri-Bazzi, president of the Muslim Legal Society at Thomas M. Cooley Law School’s Detroit area campus, says she fears Thursday’s hearing will only spark backlash against innocent members of her community just going about their lives.

“When people look at me walking down the street, they’ll feel like I’m an al-Qaida radicalist,” said Bakri-Bazzi, who lives in the Detroit suburb of Dearborn, home to one of the nation’s largest populations of Arabs and Muslims.

As the profile of American Muslims has been heightened by the 9/11 attacks and subsequent wars in Afghanistan and Iraq, many Muslims say they too have been inspired to protect their communities against terrorism. They are becoming more active in civic and political causes and more regularly reach out to law enforcement officials.

“No community is working more diligently than the Muslim community,” said Sally Howell, an associate professor at University of Michigan-Dearborn and author of several books and essays on Arabs and Muslims in Detroit. “Really, there is nobody in our society that is more concerned about this than the Muslim community. There have been instances of this coming from their community and they don’t want it to happen.”

Emotions were strong in the hearing room in Washington. Framed by photos of the burning World Trade Centre and Pentagon, two families argued Islam was responsible for luring young men to become radicals. On the other side, Democratic Rep. Keith Ellison – one of two Muslims in Congress – wept while discussing a Muslim paramedic who died in the attacks.

Jim Riches, a former New York City deputy fire chief whose son, Jimmy, was killed at the trade centre, said he believes Muslims can do more.

“All people should be treated the same way, but the Muslim community has to step up,” he said. “There are plots being hatched in mosques. It’s a major problem. Muslim terrorists are on our soil.”

A handful of Somali and Muslim community leaders in Minnesota gathered to watch Thursday’s hearing, clapping and nodding their heads in agreement when one witness called the proceedings skewed.

Many said they feared the hearing would demonize Muslims, particularly in the wake of reports that around 20 men left Minnesota in recent years, possibly to join a terror group in Somalia.

Zuhur Ahmed, host of a local Somali radio show, said a hearing about radicalism is fair – because certain individuals do pose a threat. But she says it’s wrong to single out the Muslim community. She says a threat to America is a threat to her as well.

“I have contributed to his campaign,” Amin said. “I personally met him at one function and asked him to please come and at least talk to us: ‘You have been in our community so many times. Have you seen anything with your eyes?’ He didn’t give me an answer.”

The hearing also was on the minds of people going about their business Thursday afternoon in Dearborn, where an Arab museum, prominent mosques and scores of Arabic-signed business make it one of the nation’s best known Middle Eastern enclaves.

Even as a college basketball tournament played on the television in his family’s Arabica Cafe, Allen Ghamlouche couldn’t help but reflect on what people elsewhere were watching play out in Washington.

“They’re not trying to find the truth,” Ghamlouche said. “The non-Muslims are looking for the boogeyman.”

Cafe manager Mohamed Kobaissi took a break from preparing plates of falafel, shawarma and other Middle Eastern dishes to defend his loyalty to both his religion and country.

“We’re always under attack by the media,” said Kobaissi, who proudly points out that he served food to former President Bill Clinton and got to shake the leader’s hand in the mid-1990s during a visit to Detroit Metropolitan Airport when he worked for a nearby hotel.

“Trust me – I’ll be the first guy to defend the U.S., but at the same time I like to (say) Islam is nothing about terrorism,” Kobaissi said.

At the Islamic Centre of America in Dearborn, one of the nation’s largest mosques, executive administrator Kassem Allie fears that the hearing and promised follow-ups will only drive those already susceptible to being radicalized further underground.