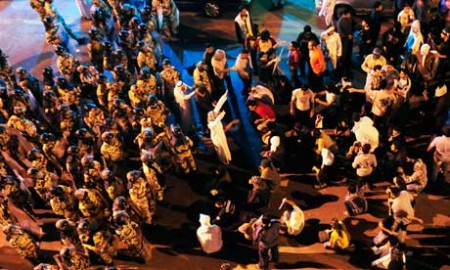 It is 9 p.m. on a Monday, and the Jasur bookstore cafe in Jeddah’s chic Hamra district is hopping. Upstairs, Saudi men and women pack a poetry reading, while downstairs a book club discusses Malcolm Gladwell’s bestseller, “Blink.” Nearby, a team of young comic writers is hashing out the latest in a series of YouTube episodes that satirize Saudi politics and society.

“Don’t get me wrong,” Hasan Eid, the editor of a poetry anthology, reads from a new collection. “I love my country to death. But what I see every day makes me sigh under my breath.”

With some Saudi men in jeans, others in traditional thobes, and women in black abayas, the emergence of the trendy literary scene is nothing short of ground-breaking in this conservative kingdom, where the mixing of sexes is largely prohibited and movie theatres are banned.

A growing frustration with Saudi political and social behaviours has been visible throughout the kingdom in recent weeks, as measured in budding protests, bolder blog posts and petitions asking King Abdullah bin Abdul Aziz to loosen up his rule.

But the discontent is particularly palpable among the young and educated in Jeddah, Saudi Arabia’s historically most progressive city, which has long been at odds with the more religiously conservative capital, Riyadh. The new cafe has become a hub for young intellectuals to share ideas as the Middle East undergoes the most sweeping period of change in their lifetimes.

Inspired by their counterparts in Tunisia, Egypt and other parts of the Arab world, Jeddah’s 20-somethings are ablaze on Facebook, blogs and Twitter, tweeting away on iPhones and BlackBerrys about government corruption and the need for political reform, while organizing social gatherings such as those at the bookstore that have long been taboo.

The cafe called Jasur, or Bridges, opened nine months ago; its owners said they wanted to create a business that could help the community. That the government hasn’t tried to disrupt events at the shop might signal a growing tolerance among local authorities. But the mixing of sexes in public settings remains otherwise rare because of government scrutiny and rules.

Even before the spirit of revolution spread across the Arab world, residents of this city on the Red Sea had been in an iconoclastic mood. A massive flood in January displaced thousands of people and damaged 95 per cent of the city’s streets, prompting complaints from residents about the absence of an effective government response.

Jeddah’s young reformers have stopped short of calling for the kinds of street protests that toppled governments in Egypt and Tunisia and have left others under threat. In interviews, young Saudis said they are determined that whatever happens in Saudi Arabia remains orderly.

“We don’t want a revolution,” said Mahmoud Sabbagh, 28, a prominent Jeddah blogger and leader of local activists. Instead, Sabbagh said, the kingdom needs to take small steps toward greater democracy and the kind of freedom manifest in the new cafe culture.

“We need to take this phenomenon,” Sabbagh said of the lively discussions unfolding at the bookstore, “and turn it into a right.”

Sabbagh recently gave up a column at the Saudi newspaper al-Watan to focus his activism online through Twitter and other social media. Last month, he was one of five core drafters of a petition sent by 45 students and others to the king asking for political reforms, and he routinely fields calls from princes in the Saudi royal court who want to keep informed of youth sentiment in the city.

His tweets are typical of those of his generation. As security services in Egypt tried to keep a lid on documents detailing past treatment of political prisoners by the country’s Interior Ministry, Sabbagh wrote that “this should end an era in the Arab region of spying on their own people.” When female booksellers and readers were harassed by religious police at a recent international book fair in Riyadh, he tweeted, “Are we about to witness a new McCarthyism in Saudi?”

Among the most notable shifts, Sabbagh said, has been the willingness of Saudis to move beyond anonymity in registering their complaints. “People put their names on Facebook and Twitter,” he said. “People don’t care anymore. They act bravely.”

One of the boldest displays of the new courage is a YouTube show, “At-Tayer,” loosely translated, “On the Fly.”

The webisodes – mock newscasts and skits similar to those on “The Daily Show with Jon Stewart” – have drawn up to 380,000 viewers per episode. One recent show, which is in Arabic and intended primarily for a Saudi audience, was for one day the 15th most viewed worldwide in YouTube’s entertainment category.

The episodes have poked fun at a range of targets, including the kingdom’s minister of information, the high salaries paid to the shura council that advises the king, Libyan leader Moammar Gaddafi and the oddities of Saudi society, such as how boredom drives Saudis to find excuses to celebrate in the streets. But it has stopped short of overt jokes about the king, who remains admired, including among Jeddah’s younger generation.

Lead comedian Omar Hussein – a product-line manager at Procter & Gamble who does part-time stand-up – is 24, and the two main writers, Dima Ikhwan and Lama Sabry, are 22-year-old women. They are all part of a bilingual, new-media-savvy generation that seems not to even realize there might be something to fear.

“We don’t cross any red lines,” said Hussein, explaining why he thinks the government hasn’t tried to block the show. “We never offend a person.” The Web series, which receives enormous feedback from online viewers, he says, is simply “helping break down barriers and letting people talk.”