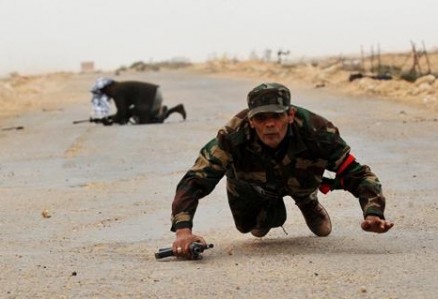 As Russian-made jets dropped more bombs on the city of Ras Lanouf, rebel leaders in their stronghold to the east of Benghazi were not panicking.

While true that the airstrikes were not causing major damage to the city or rebel positions, they have seemingly halted the advance of the young and disorganized anti-government forces to the stronghold of Libyan leader Moammar Gadhafi in Tripoli.

“Gadhafi doesn’t have enough people,” said Mustafa Gheriani, a media coordinator for the rebel movement. He said Gadhafi can only strike and then retreat without holding territory. He lacks support from the people, which makes it dangerous for him to leave forces to hold territory far from Tripoli, Gheriani said.

The standoff is reminiscent of the situation faced by Iraq’s Saddam Hussein, who in 1991 was confronted with a revolt in his military during the Persian Gulf War, said Ken Pollack, director of the Saban Center for Middle East Policy at the Brookings Institution. Many thought the Iraqi leader was finished, “but he prevailed.”

Like Saddam, Gadhafi still has loyal units that are organized under a military structure and know how to use their weapons, said Pollack, who as a military analyst for the CIA monitored the Iraqi revolt and helped implement the no-fly zone later imposed on Iraq. Gadhafi appears to have pulled loyal forces into Tripoli, reorganized them and launched successful ground operations with the air force playing a minor role, Pollack said.

Marina Ottaway, director of the Middle East Center at the Carnegie Endowment for International Peace, said she believes Gadhafi may have extended his reach as far as he can go. She described it as “rather puzzling” that Gadhafi’s forces have had difficulties against poorly equipped rebels who barely know how to use the weapons.

“You’d expect under those conditions that Gadhafi’s forces would sweep down the coastal road and take one town after another,” Ottaway said.

That hasn’t happened. Most gains by forces loyal to Gadhafi have been lost. “What that suggests to me is they are not that effective, not much better in training or conducting operations than the opposition forces,” Ottaway said.

In London, British Foreign Secretary William Hague said that neither Gadhafi nor rebel forces appear able to establish supremacy. “At the moment … it seems that either side lacks the immediate power to overthrow the other,” he said.

Laga said things would have gone better thus far had some of the rebel forces not disregarded orders and attempted to push on too quickly without support from heavy weapons.

In addition to the airstrikes in Ras Lanouf, witnesses said Gadhafi forces were decimating an uprising in Zawiya, a city a short distance from Tripoli.

Rebel forces consist of defectors from the army as well as thousands of civilian volunteers. Laga said the regular army officers will command the overall force, but the organization is not in place yet. Fighting in Bin Jawwad, 375 miles from Tripoli, was the result of overzealous volunteers entering the city without sufficient support, he said.

“Some of them want to die for God,” he said. “It’s hard to control them. They want to get revenge.”

Laga said it will take a few more days to build the organization and reinvigorate the offensive.

“Don’t forget they are all fighting for the same goal,” he said. “Within two days, we will break the stalemate.”

A rebel volunteer at Ras Lanouf, Saleh Mostafa, 19, could not say who issued his orders and whether he was part of an organized military unit such as a platoon.

Rebels say Gadhafi’s regime has little true support among the people and would collapse quickly if the West enforced a no-fly zone against his aircraft, which would prevent him from flying in more paid fighters from outside the country.

“That is the least they can do to stop the carnage,” said Abdul Hafeth Gogha, the vice president of the provisional government.

Ottaway said that while the Libyan air force appears to have executed more bombing raids on rebel forces, it’s not clear how effective it has been, because the pilots rarely hit their targets.

“There is no doubt the opposition forces are afraid of the bombing because they’re helpless against it,” Ottaway said. However, “these planes are flying very high — and the higher they fly, the less likely they are to be accurate.”

With time, loyalist successes are likely to continue even if the United States or Western nations shut down the Libyan air force, Pollack said.

“This is an air force that has had a hard time hitting cities in daylight with no anti-aircraft protections,” Pollack said.

“This is a war that is likely to be settled on the ground.”