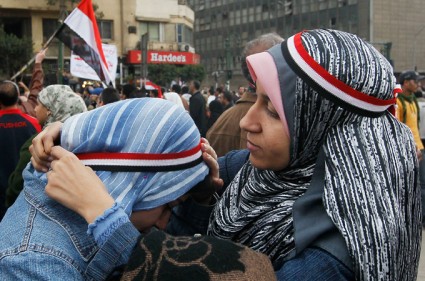 The Saturday before last, I sat down in Cairo with some of the young people who led the popular revolution in Egypt. Among the many remarkable things about this group, I noticed that a good third of them were women; very diverse women, from human rights activists to modern secularists to members of the Muslim Brotherhood.

Egypt’s revolution was diverse in many ways, not least because it was a movement of women as much as of men. Of the hundreds of thousands in Tahrir Square for those momentous 18 days, many were women.

And, as I continue through the Middle East at this pivotal time in world history, what should be remarked on the 100th anniversary of International Women’s Day is the role Arab and Muslim women have played in working towards progressive, democratic change in their own societies.

Some people will dispute this. They will tell you Arabs and Muslims do not share our values. They will wrongly say Arab feminism is an oxymoron.

I see the world differently. I see a world where shared values dominate our lived experience globally. A world where our common denominators include falling in love, raising a family, thirsting for an education, pursuing fair work for fair pay, and resolutely yearning for freedom.

These values know no borders.

The modern Arab and Muslim women’s movement is as old as International Women’s Day itself. Hind Nowfal started the “Young Woman” magazine in 1892, the first of a number of feminist journals in Egypt at that time; Mai Zaide, a Lebanese-Palestinian, was a leading literary light in Egypt in the 1920s and 30s, a poet, an essayist and also an activist for women’s rights; Hoda Shaarawi, an Egyptian feminist leader, ran demonstrations during the revolution of 1919 against British occupation.

Men including Qassim Amin and George Niqula Baz actively participated in the early days of the women’s movement. They advocated the right of women to education, called for the secularisation of the state and demanded a role for women in nation-building. The call for justice was as strong then as it is now.

Today’s progressives continue the cause, from Nawal al-Saadawi – the Egyptian feminist, writer, and campaigner against female genital mutilation who was imprisoned for her political views, and at 80 years old joined the protest in Tahrir Square – to Leila Ahmed, whose progressive work, Women and Gender in Islam, is a Middle East studies classic.

I do not profess to be an Arabist, but I join with those who pay homage to the strength, courage and tenacity of these women.

Like current waves of protesters, the Arab and Muslim women’s movement maintains its Arab and Islamic identity. It is no proxy for the West. We know full well that the Arab and Islamic women’s movements continue to face huge challenges, but their unstoppable optimism, integrity and ability to interpret women’s issues through the lens of human rights for all make them a very special force for constructive change; a force that we could all learn from.

These women, like all of us, bring a plethora of identities to their contributions to the life of our nation. They are variously women, Arabs, Muslims, Australians. Great nations do not just “tolerate” such citizens, they actively celebrate and seek to harness their immense contributions and potentials.

Let us pause and reflect on this International Women’s Day and ask how we might learn from our sisters in the Arab and Muslim women’s movement, find strength in diversity, and cherish the contributions that Arab and Muslim women make daily not just to the quest for freedom and democracy across the Middle East, but to the protection of freedom and democracy right here in Australia.