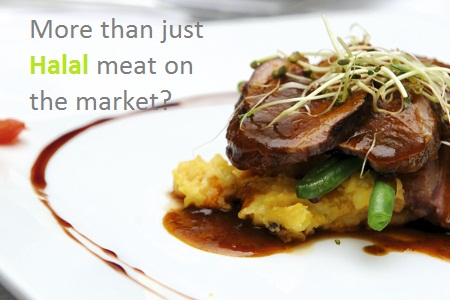 With the Islamic community now the fastest-growing consumer segment in the world, can businesses afford not to become part of the halal trend?

Ahmad whips out his iPhone to scan the ingredients in the frozen pizza he holds in his hands. The halal Scanner app he recently downloaded informs him the pizza is Sharia-compliant. He tosses it into the trolley, where it lands between a tube of Colgate toothpaste, bottle of shampoo and box of vitamins – surprisingly, all halal – and proceeds to the check-out.

The concept of halal has changed rapidly over the last ten years, during which time the notion of a Muslim lifestyle has emerged in line with the evolving demographic and demands of the Muslim community.

“The rise of younger, richer Muslims who are more learned and more travelled has been paralleled with a wish to align their way of life with religion,” says Muhammad Omar, who owns a halal minimart in Bangkok. “They want to buy Islamic.”

Previously, many people believed halal concerned only the way in which animals were slaughtered, but it is rapidly developing from a purely religious requirement into a lifestyle that is fast expanding into non-traditional areas, from food and beverages into cosmetics; finance; pharmaceuticals; insurance; real estate; fashion; travel and hospitality.

“The interest and demand for halal-certified products and services continues to increase across global markets, making halal not just a religious obligation, but also a powerful market force,” says Hajj Abdalhamid Evans, Director of the World Halal Forum.

Benchmarking the global halal food market as an example, it has grown in value from $558 billion in 2004 to $662 billion in 2010, reflecting 13% growth and accounting for more than 16% of the entire global food industry.

In 2008, the Vatican announced that Islam had become the world’s largest religion in terms of followers, making the Muslim population the fastest-growing on Earth. “The rise in the number of Muslims inevitably increases the demand for halal products and services,” says Jumaatum Azmi, founder and managing director of KasehDia, a consultancy firm. The global Muslim population is estimated to reach more than 1.6 billion by the end of this year. “This sheer size of demography, as well as the fact that this segment is growing more educated and discerning, has created a demand for halal that is growing beyond the staple of food.”

Targeting the Muslim consumer “requires an understanding of how their devoutness, regardless of the level of intensity, affects their lives as Muslims in the modern world,” says Jumaatun Azmi, referring to young devout Muslims hunger for Islamic versions of mainstream pleasures, such as fast food and technology. “We want to eat; drink; shop; work and play just like everyone else.”

Many big corporations and Fortune 500 companies have recognised the huge potential halal has to offer and are eagerly tapping into the $2.1trillion industry.

Multinational corporations have been quick to establish a strong presence in the sector, with restaurant chains such as McDonald’s, Burger King and Nandos already offering halal-certified products in the Middle East and other Muslim-majority regions.

Increased competition in the burgeoning sector has resulted in manufacturers popping up in unusual places. Exporters of halal meat into Gulf Cooperation Council (GCC) countries are suppliers from non-Islamic countries, consisting of Brazil, which supplies 54%; India (11%); Australia (9%) and the EU (7%).

Meanwhile, retail giants French Carrefour and UK-based Tesco are increasingly catering to the demands of the halal market. Carrefour, the world’s second-largest retailer, has quadrupled shelf space for halal food in Western Europe since 2006, according to a report by management consultancy A T Kearney.

Swiss food giant Nestle, a pioneer in the field, has a history in the sector that reaches back to the 1980s and its turnover in halal products was $3.6 billion in 2008, according to Time magazine.

“It is much easier for a large company to go halal than for a small halal company to get big, so the multinationals will continue to dominate the sector,” says Evans of the non-Muslim corporations that control an estimated 90% of the global halal market. “In that respect, halal is just a sub-set of the global food market.”

Yet it’s not just about food. Personal care companies such as Johnson & Johnson and Proctor & Gamble are also vying for a slice of the industry. Meanwhile, The Body Shop uses marketing efforts that are in line with Muslim values to promote their entirely natural products.

“Industry players are looking for opportunities and there is a strong entrepreneurial spirit alive in the halal sector,” says Evans. South Korea’s LG offers an application to help users find the direction of Mecca, while Finnish cell-phone giant Nokia has free downloadable recitations from the Koran. There’s even talk of a halal car.

Universal appeal is growing as well. “Halal products and services are becoming synonymous with other universal values such as health; hygiene; non-animal cruelty, etc,” says Jumaatan Azmi. “There is a huge untapped opportunity to brand and market halal not only to traditional consumers, but also to the non-Muslim consumers who are making consumer choices based on values and ethics. Halal is going mainstream.”

Southeast Asia, according to the experts, has the potential to become a world halal hub. A trailblazer in the industry, the region has a “high level of awareness” and understanding of the concept of halal as an economy in its own right, says Evans.

“Halal forms an important element of the identity of the Southeast Asian Muslim and this is one of the reasons that halal certification is so well developed in this region. Eating only halal food is taken very seriously by Southeast Asian Muslims, even when they travel, and this is partly the result of living in a multi-cultural and multi-religious region where food may often be prepared and served by non-Muslims.” In 2010, the halal food market for GCC countries was worth $46 billion, while in Asia it was worth $372.1 billion. “The Southeast Asian Muslims want to ensure that they are eating halal and it forms a central part of their cultural identity,” Evans explains.

In the region, it is common to see halal symbols on many non-meat products, even tea; dairy; water and toothpaste. In other parts of the world, this is unheard of. “This is what makes the halal market such a diverse and complex arena,” says Evans, who is organising the 6th World Halal Forum in Kuala Lumpur on 4-5 April. “It is not one market, it is many markets.”

On the global arena, experts predict increasing demand for halal products and services from non-Muslim countries. “The European Muslim population has grown 140% in a decade and is continuing to outpace non-Muslims,” according to one A T Kearney report, which notes that the current level of halal food consumption is worth $66.6 billion in Europe; $23.6 billion in India; $20.8 billion in China and $16.1 billion in North America.

“The trend, as we see it, will be a steady increase in demand from these nations,” says Azhar Jamal of the Halal Industry Development Corporation, “hence Southeast Asia, with their expertise in halal products and services, will do well to meet the demand.”

Surprisingly, however, it is not the world’s largest Muslim country, Indonesia, which is driving the regional halal agenda, but its smaller neighbour, Malaysia.

With the advantages of a Muslim-majority population, strategic location and government committed to developing attractive incentives, trade facilities and infrastructures for halal products and services, Malaysia has all the necessary components required to become a halal hub. “It has always been a leader in the halal market,” says Evans.

In an industry that requires further standardisation, the core of Malaysia’s strength lies in the halal standard MS1500:2009, an acknowledged worldwide benchmark, says Evans. As a Muslim-majority, multi-cultural nation where a significant percentage of food is manufactured by non-Muslims, obtaining halal certification for manufacturers, facilities and food outlets is well established and “has given the Malaysians many years of experience, making them natural leaders in this field.”

Within the food manufacturing sector, Thailand is following in hot pursuit, with 42 EU-certified food companies approved to export halal processed food. Singapore has, to date, focused almost exclusively on food distribution and the food and beverage sector, while Indonesia has concentrated on raw food. Other regional nations, including the Philippines and Brunei, are now scrambling to get on board. “There is tremendous opportunity for growth in the food sector throughout Southeast Asia, both for serving the local markets as well as for export to the GCC and EU markets,” says Evans. New sectors that are growing notably rapidly are the personal care market and the travel and hospitality related areas.

Famiza Zulkifli began making halal cosmetics, free of alcohol or animal fats, in 2006. Four years later, her business had a turnover of $4m, which she hopes to triple to $12m this year. “We don’t have the capacity to keep up with demand,” says the Malaysian entrepreneur, who produces 3,000 personal care products to address cosmetic issues from “head to toe”. The halal cosmetics business, estimated to be worth $560m globally, is considered by analysts to be the next in line for growth after the lucrative halal food and Islamic finance sectors.

Yet Famiza Zulkifi says her fastest-growing production line is household goods. Her Sharia-compliant products have replaced animal fat, an ingredient found in regular products, with palm oil. With the range selling so well, she hopes to enter the international market in “full swing” in the next five years.

Southeast Asian nations are also taking advantage of the migration of halal certification to the travel sector. Halal tourism – hospitality services that comply with Islamic law – is much more developed as a concept in Southeast Asia than anywhere else in the world, says Evans. This is due to two factors, he explains.

Firstly, there is much more awareness of the needs of Muslim tourists in Southeast Asia, and more hotels and tour operators have duly recognised the huge market potential for this brand of specialist tourism. Secondly, the target audience are the GCC and Middle Eastern tourists who are already an important part of the tourism industry in the region, “so there is a good synergy of supply and demand between Southeast Asia and GCC countries.”

“We are also seeing an important shift,” says Evans, “whereby the Islamic Finance services industry and the halal industry are beginning the long process of merging to form a new halal market economic paradigm… a halal ecosystem. Southeast Asia is certainly leading the way. Perhaps the main lesson that the GCC has learned from Southeast Asia is that halal is a powerful market force that can open up new opportunities in global markets. Since Muslims are the fastest growing consumer segment in the world, the growth of the halal industry is going to be one of the most important developments over the coming decade, and is likely to develop into a powerful global economic force. Any business would want to get on board.”