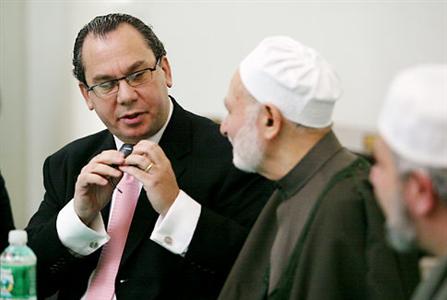 Jewish and Muslim groups are mobilising over an attempt to outlaw male circumcision in San Francisco by putting the issue to a popular vote.

A self-described ”intact-ivist”, Lloyd Schofield, has been collecting signatures for a voter initiative that would criminalise infant circumcision in the Californian city.

After two months of collecting names, he claims to be more than halfway towards obtaining the 7168 signatures he needs by late April to put the matter on a ballot to be held in November.

Mr Schofield and a growing community of anti-circumcision activists say infants should not be forced to participate in what is essentially culturally accepted genital mutilation.

They claim the procedure can cause health risks and diminished sexual function and compare it to the clitoridectomies performed on girls in parts of Africa.

”This is a human rights issue,” he said. ”What you’re doing is you’re taking an infant and removing the most sensitive part of their body.”

Jewish organisations have pledged to fight the measure should it be placed on the ballot. The director of the Anti-Defamation League, Daniel Sandman, called Mr Schofield’s effort discriminatory and misguided. ”This is hurtful and offensive to people in the community who consider this a coveted ritual,” he said.

Abby Porth of the Jewish Community Relations Council charged Mr Schofield with wasting city resources for an inappropriate political stunt that was unlikely to become law.

”This is one of the most fundamental practices to our tradition of over 3000 years,” she said. ”It’s symbolic of our covenant with God.”

Ms Porth said the Jewish community would form a coalition against the initiative with medical professionals and Muslims, who also practise circumcision.

”It’s very similar to those of the Jewish faith,” said Omar Nawaz of Zaytuna College, a Muslim college in the San Francisco Bay area.

”It’s a religious tradition and it’s important for us.”

If the ban is approved, those caught cutting the foreskins of infants and other minors would face up to a year in jail and a fine of $US1000.