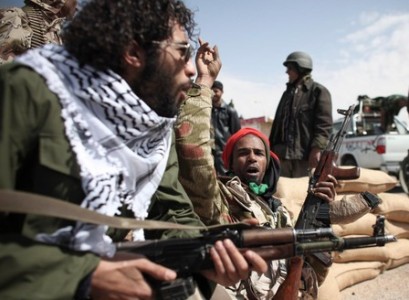 After weeks of internal debate on how to respond to uprisings in the Arab world, the Obama administration is settling on a Middle East strategy: help keep longtime allies who are willing to reform in power, even if that means the full democratic demands of their newly emboldened citizens might have to wait.

A fighter for the Libyan rebels prepares for battle Friday against forces loyal to Col. Moammar Gadhafi, on a day when the two sides waged a fierce battle near Tripoli.

Instead of pushing for immediate regime change—as it did to varying degrees in Egypt and now Libya—the U.S. is urging protesters from Bahrain to Morocco to work with existing rulers toward what some officials and diplomats are now calling “regime alteration.”

The approach has emerged amid furious lobbying of the administration by Arab governments, who were alarmed that President Barack Obama had abandoned Egyptian President Hosni Mubarak and worried that, if the U.S. did the same to the beleaguered king of Bahrain, a chain of revolts could sweep them from power, too, and further upend the region’s stability.

The strategy also comes in the face of domestic U.S. criticism that the administration sent mixed messages at first in Egypt, tentatively backing Mr. Mubarak before deciding to throw its full support behind the protesters demanding his ouster. Likewise in Bahrain, the U.S. decision to throw a lifeline to the ruling family came after sharp criticism of its handling of protests there. On Friday, the kingdom’s opposition mounted one of its largest rallies, underlining the challenge the administration faces selling a strategy of more gradual change to the population.

Administration officials say they have been consistent throughout, urging rulers to avoid violence and make democratic reforms that address the demands of their populations. Still, a senior administration official acknowledged the past month has been a learning process for policy makers. “What we have said throughout this is that there is a need for political, economic and social reform, but the particular approach will be country by country,” the official said.

A pivotal moment came in late February, in the tense hours after Mr. Obama publicly berated King Hamad bin Isa al-Khalifa for cracking down violently on antigovernment demonstrators in Bahrain’s capital. Envoys for the king and his Arab allies shuttled from the Pentagon to the State Department and the White House with a carefully coordinated message.

If the Obama administration did not reverse course and stand squarely behind the monarchy, they warned, Bahrain’s government could fall, costing America a critical ally and potentially moving the country toward Iran’s orbit. Adding to the sense of urgency was a scenario being watched by U.S. intelligence agencies: the possibility that Saudi Arabia might invade its tiny neighbor to silence the Shiite-led protesters, threatening decades-old partnerships and creating vast political and economic upheaval.

Arab diplomats believe the push worked. Defense Secretary Robert Gates and Secretary of State Hillary Clinton emerged as leading voices inside the administration urging greater U.S. support for the Bahraini king coupled with a reform agenda that Washington insisted would be have to be credible to street protesters. Instead of backing cries for the king’s removal, Mr. Obama asked protesters to negotiate with the ruling family, which is promising major changes.

Israel was also making its voice heard. As Mr. Mubarak’s grip on power slipped away in Egypt, Israeli officials lobbied Washington to move cautiously and reassure Mideast allies that they were not being abandoned. Israeli leaders have made clear that they fear extremist forces could try to exploit new-found freedoms and undercut Israel’s security, diplomats said.

“Starting with Bahrain, the administration has moved a few notches toward emphasizing stability over majority rule,” said a U.S. official. “Everybody realized that Bahrain was just too important to fail.”

An exception to the policy of regime alteration is Libya, a longtime U.S. adversary partially rehabilitated by the Bush administration after Tripoli agreed to give up its nuclear program. Mr. Obama’s initial reaction was muted, but he later criticized Col. Moammar Gadhafi for committing acts of violence against his own people and called for the dictator to step aside. Critics say the response has been too slow and that military action is needed.

The emerging approach could help slow the pace of upheaval to avoid further violence, the administration’s top priority, and help preserve important strategic alliances. At the same time, the approach carries risk. Autocratic governments might not deliver on their reform promises, making Washington look like it was doing their bidding at the public’s expense. Officials said the administration’s response in Bahrain, Yemen and elsewhere could change if people take to the streets en masse, rejecting offers made at the negotiating table, or if the U.S.-backed governments crack down violently. Indeed, administration officials say the White House is not “unconditionally” behind the monarchy in Bahrain, and has made clear that the U.S. expected to see quick progress on reforms and restraint by security forces.

The U.S. is trying a Bahrain-like formula in Morocco, supporting King Mohammed VI, and in Yemen, whose weak central government has been headed by autocratic President Ali Abdullah Saleh for nearly 33 years. The approaches signal Washington’s willingness to vary its strategy depending on its interests and the willingness of autocratic leaders to respond to popular protests.

The lobbying push on behalf of Bahrain was led by the Gulf Cooperation Council. In addition to Bahrain, the council includes the Persian Gulf states of Kuwait, Oman, Qatar, Saudi Arabia and the United Arab Emirates.

In private meetings late last month with Washington policy makers, cooperation council envoys drove home the message that Bahrain could be a “model” that the Obama administration could follow to advance democratic reforms without fueling unrest that could further destabilize the region.

The Arab diplomats found a particularly receptive ear in the Pentagon. As Egypt began to sway, some U.S. military officers had doubts about the administration’s approach. The U.S. military has strong ties with the country. Some worried that the U.S. was moving too quickly to push aside a steadfast ally and that radical change in Cairo could destabilize the region.

Those concerns were shared by Israel and several key Arab allies, who were “furious” at the Obama administration for ignoring their appeals to allow Mr. Mubarak a graceful exit, a senior European military official said. But administration officials argued that with hundreds of thousands of protesters on the streets, they had little choice but to turn on Mr. Mubarak sooner rather than later. Indeed, the administration has been criticized by human-rights groups for not standing more squarely with democracy advocates from the start.

Though initially skeptical, the Pentagon came around to the White House’s view that if Mr. Mubarak clung to power, there would be little chance for real reform. But the Pentagon’s perspective was far different when trouble began in Bahrain.

The protest movement in Bahrain began gathering in intensity on Feb. 14, after police killed a protester and injured 25 more. Over the following days, six more demonstrators were killed and more than 200 injured, as reports circulated that the Bahraini government was moving in military equipment to disperse the protestors.

At an emergency meeting in Manama, the capital city, on Feb. 17, leaders of the Gulf Cooperation Council backed Bahrain’s response to the protests and the Bahraini foreign minister warned that the kingdom was at the “brink of sectarian abyss.”

The White House watched the developments with alarm, especially reports that Bahraini forces had fired on the crowd from helicopters. A State Department official phoned a top Bahraini diplomat and demanded an accounting of the events, a person familiar with the exchange said. Bahraini officials told their American counterparts that witnesses mistook a long telephoto lens for a rifle and that the helicopters never opened fire.

The next day, however, the Bahraini army fired on protesters again. In a call to the king, Mr. Obama condemned the violence used against “peaceful protesters,” and urged the king to direct his security forces to punish those responsible for the bloodshed, according to the White House.

Arab diplomats reacted with alarm to the U.S. condemnation. They believed the administration might be returning to the Egyptian playbook, according to officials and diplomats.

Inside the Pentagon, Mr. Gates and his team were quick to point out that Bahrain represented a very different situation than Egypt’s.

Bahrain has a restive Shiite majority that has long felt cut off from the opportunities available to the country’s Sunni royal family and social elite.

The country is the headquarters of the U.S. Navy’s Fifth Fleet, which patrols the Arabian Sea, Persian Gulf and Red Sea. Some at the Pentagon feared that Shiite-led Iran might try to hijack the protest movement in Bahrain and back installation of an anti-American government.

Though skeptical of Bahraini claims that Iran and its Lebanese proxy, Hezbollah, were instigating Shiite protests, U.S. and European officials fear the crisis could benefit Tehran. The Mideast turmoil has driven up oil prices, helping Tehran refill its coffers and withstand international sanctions aimed at curbing its nuclear program.

On Feb. 20, as two Bahraini diplomats made their case to top policy makers in Washington, Adm. Mullen, the Joint Chiefs chairman, arrived in Saudi Arabia as part of a week-long visit to Arab allies.

On the top of the agenda of his Arab counterparts: Bahrain. Adm. Mullen was straightforward about his intentions to reassure the Saudis and other Arab allies that the U.S. would live up to its security commitments, and remained a friend.

In Bahrain, the royal family scrambled to show it was complying with American demands. In the following days, King Khalifa stood down his forces and Crown Prince Salman bin Hamad al-Khalifa issued a public call for the start of a “national dialogue” with opposition groups. Privately, Bahraini officials assured their U.S. counterparts that the killing of the protesters was due not to government policy but a breakdown in the chain of command.

On Feb. 23, Adm. Mullen arrived in Manama and gave a full-throated endorsement to the national dialogue, a message endorsed by Mr. Gates.

As he has at some other critical national security debates within the administration, Mr. Gates found his most important ally in Mrs. Clinton.

Still, while Bahrain’s government believed the Pentagon’s support for a national dialogue on reforms was clear, the country’s diplomats worried the White House was not on board.

On Thursday, Feb. 24, National Security Adviser Tom Donilon spoke with the crown prince and, according to a White House statement, voiced “strong support” for efforts to “initiate an open dialogue on political reform with the full spectrum of Bahraini society.”

But Bahrain and its allies in the Gulf Cooperation Council wanted the administration to give the initiative higher-level endorsement. Without overt U.S. support from Mr. Obama or Mrs. Clinton, the Arab envoys argued, Bahraini protesters were liable to up their demands.

The “Bahrain model,” they said, offered the administration an alternative to their Egypt approach and could be a solution not only to the crisis in Manama, but also a template for dealing with Morocco or even, potentially, Yemen.