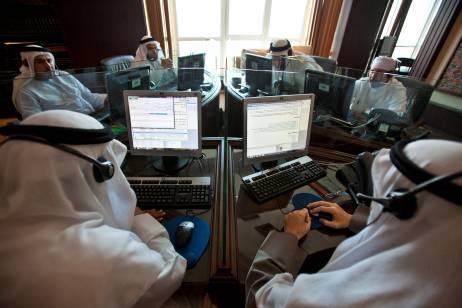 ABU DHABI – The muftis say there are three types of people who call asking for religious advice.

Some have the most basic questions about how to be a good Muslim. Others are seeking clarification on contradictory religious information they have heard.

The third group, they say, seems more in need of someone to listen.

“Some call and just cry,” says Dr Shiekha Radia Salem, a muftiya, or female Muslim legal scholar. “We wait and let them release whatever is in their hearts, and then we try to help them by finding solutions to their questions and concerns.”

The phone seems always to be ringing inside the capital’s General Authority of Islamic Affairs and Endowments (Awqaf) fatwa centre, a bustling, homey hub near the intersection of Al Falah and Muroor streets. Recently The National was not only given exclusive access inside the centre – the first since it opened in August 2008 – but granted the first interviews with some of the muftis and muftiyas who provide guidance to a nation.

A large TV screen is updated every 18 seconds with a summary of what is happening inside the centre. It separates the categories of fatwas being answered at any given time and rates the frequency of calls coming in from green to red, with the higher levels signalling that the muftis need to move on to another call. The consultations can last up to 10 minutes for family matters. Each caller is promised service within three minutes of being put on hold.

There are 40 muftis on staff – six of them women – with at least 10 answering calls on any given six-hour shift. Others answer questions sent in via e-mail and text message. All are to remain anonymous to the callers.

The legal scholars respond to between 1,000 and 1,500 calls per day, with numbers peaking at 3,000 during religious occasions. Last month, they collectively issued 20,302 fatwas, each one outlining what is, and is not, permissible under Sharia Law.

The centre is closing in on one million fatwas, having issued 825,979 by the end of last year. The number of inquiries has steadily risen, prompting plans to double the number of muftis on staff to 80.

As there has also been a notable rise in the proportion of female callers, the centre plans to include more muftiyas in their hiring.

Dr Sheikha Salem is one of two women on duty during the visit. While eight muftis sit in cubicles arranged in a circle around the centre of the large “fatwa hall”, Dr Sheikha Salem and her counterpart, Dr Sheikha Naeema Ghareeb, are off to the side in a special space reserved for females. Each has added personal touches: a small vase filled with fresh flowers, their favourite collection of religious books piled on the desk.

As a woman on the other end of the line asks a question about a family matter, Dr Sheikha Salem types some keywords into a database of 10,000 religious books. Once she is provided with the reference she is looking for, she must then convey it in a “clear” and “courteous manner”.

“It is all saved and recorded,” she explains. “And so if the same caller calls again, then the list of other fatwas issued for that number shows up on the screen.”

Dr Sheikha Salem and Dr Sheikha Ghareeb are former schoolmates who have bonded further on the job. Both women have had the experience of real-life encounters with regular callers to the centre – women who recognised them while they were praying at a local mosque, just from the sound of their voice. “It is so touching,” says Dr Sheikha Salem. “We developed some really strong sisterly relationships with some of the women that call us regularly.”

On her recent shift, Dr Sheikha Ghareeb says some of the calls are also from men, husbands seeking to resolve conflicts with their wives.

“In many ways, we have become soul doctors, where we help ease the soul of a caller,” she says. “Sometimes, they need a woman’s perspective on an issue in their home.”

The calls come in from 8am to 8pm, Sunday to Thursday, and are monitored by a supervisor who can listen in at any time, and does – particularly if a call or a mufti’s break between them seems to be taking too long.

Callers to the toll-free line can choose from three languages – Arabic, English and Urdu – and five categories: general, worship, etiquette and behaviour, family matters and female-specific questions. Questions on divorce and inheritance are referred to the legal courts. Callers with more difficult questions are usually transferred to muftis with specialised experience and are guaranteed an answer within 24 hours.

Dr Mohammed Bassam al Zain, who advises Hamdan Musallam al Mazrouei, the Awqaf chairman, previously served as an Imam in local mosques, where he regularly gave Friday sermons. Since the fatwa centre launched he says it has allowed the authority to “reach” into the homes of the country’s Muslims in a new way. “Before, a Muslim had to come to us and try to find the religious scholar or Imam to ask the questions,” he says.

According to Dr Mohammed Matar al Kaabi, the director-general of Awqaf, fatwas are answered based on “a middle path and moderate” interpretation of Islam, veering away from anything extreme.

The muftis all have a Bachelor’s degree in Sharia, practical experience issuing fatwas and an understanding of Fiqh, Islamic jurisprudence. They have also memorised the Quran. Muftis are generally only hired once they are in their 30s, preferably over 35.

The job is challenging, considering the variety and volume of calls, and requires that each mufti be gifted in the skill of communication, explains Sheikh Mahmoud Daqqaq, a mufti from Syria who has worked at the centre since it opened.

“One of the most important principles this fatwa centre is built on is to make sure the message is delivered properly and accurately,” says Sheikh Daqqaq.

Dr al Zain agrees, acknowledging that opening the fatwa centre has encouraged the authority to clarify its messages. “The centre helped us realise that our language needs to be simplified so we can reach and better advise our Muslims,” he says. “The fatwa should not be confusing, but simple advice on how to best lead a good Muslim life.”

Muftis with all the answers

There have been tens of thousands of calls to the centre since the beginning of the year – more than 20,000 in January alone – prompting its muftis to issue rulings tackling possible corruption in the workplace, the ethics of faking CVs and whether silk is a permitted fabric for men’s clothing.

One Muslim e-mailed to ask if employers are allowed to receive “gifts” at the end of a project, which prompted the answer: “Gifts are allowed as long as there is no hidden agenda behind it … it is not acceptable if it is in a form of a bribe for silence over a wrongdoing.”

Other work-related fatwas prohibited the “forging of documents or dates on documents” to help in finding a job, and the “breaking of promises” to a colleague or friend.

“If you promised to drop him off at work, then keep your promise, as it is one of the ethical values that Islam calls for,” the fatwa said.  “Unfortunately, breaking promises is one of the attributes of the hypocrite,” it added.

Other fatwas reiterated that smoking is haram – no exceptions – and throwing rubbish out of your car on to the ground is forbidden because it harms the environment and other drivers.

Muslim men were also reminded that it is forbidden for them to wear clothes made of pure silk. If the material is mixed, then the silk should be the least obvious or a minor fabric.

Basic rights must be respected, a mufti said to a woman who had lied about her age to her husband-to-be.