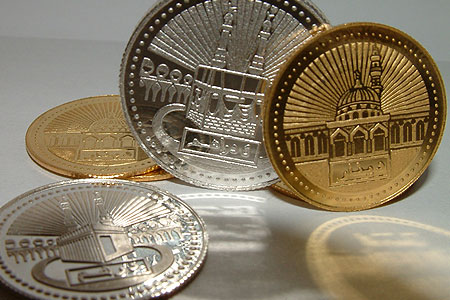 Many Indonesians see dinars and dirhams as the best way of protection against economic fluctuations.

Seeing it as a source of security amid global economic instability, Indonesians are returning back to traditional Islamic currently in their daily transactions.

“I’ve chosen dinar because of it is safe and stable,” Hardjito Warno explained on Saturday, February 26.

The Indonesian man has been collecting gold dinars as a long-term investment since 2006.

He is now the holder of more than 50 coins in his deposit box, which he sometimes uses for certain purposes, such as paying education fees.

“[The] dinar is very liquid so I can use it for multiple purposes,” Warno said.

Dinar and silver dirham are available in shops in the world’s most populous Muslim country.

For collecting the Islamic coins, Warnoh regularly buys dinars from an agent in Jakarta.

“Sometimes I use dinar for transaction as Rasulallah teaches us,” Warno said.

There are at least 46 coin shops in the capital Jakarta and its surrounding cities, making it accessible for consumers to buy.

“In certain communities and areas the transaction using dinar and dirham have been applied,” he added.

The dinar measures 4.25 grams of gold, while the dirham is 3.0 grams of pure silver.

A golden coin is equivalent to about 582 ringgit (US183 dollars) while the silver coin is worth around 13 ringgit but their values fluctuate according to market prices.

Some Indonesians see dinars and dirhams as the best way of protection against economic fluctuations.

“I would say those who put billions rupiah of idle money in conventional banks are the losers and oppressors,” Endy Kurniawan, the author of a book titled “Think Dinar” revealed.

For some business people, putting cash in financial institutions is not the best way to invest money due to inflation and tax obligation.

“If we’re putting money in conventional bank then how much it could boost economic growth,” he asked.

The interest rates for depositing money in banks is six per cent a year in average, while the inflation rate in Indonesia is one or two per cent higher, according to the Indonesian Statistic Body.

Gold, which is typically most stable and liquid commodity, has traditionally been favourite jewellery for Indonesian housewives and become the best reliance for Muslims at needy situation, to sell or pawn.

“People have their own logic and consideration to decide, which one is better to protect their assets: holding gold or saving money,” Kurniawan added.

According to him, there is no specific data of how much dinar circulation exists in Indonesia.

Indonesia is the world’s 37st biggest gold reserves country, which is spread in a number of its big islands, such as, Sulawesi, Papua, Sumatra and Borneo; and about 18,500 tons have been produced to be fine gold and jewellery, according to data state own company PT Aneka Tambang.

Some Indonesians see the point of using dinars as part of efforts to uphold Shari`ah (Islamic law).

“It’s even more than investment. It is for upholding Islamic law,” Kurniawan said.

“It’s the weakness of using paper currency; using gold dinar would be fairer,” he added.

“This is part of upholding Islamic law,” he said.

He hopes that the mushrooming dinar usage in Indonesia will inspire other countries to consider the establishment of using-dinar caucus countries, as a stepping stone of global economic reform.

“I suggest, Indonesia and any other Muslim countries, such as Pakistan, Malaysia, Brunei and Middle East countries to implement the usage of dinar as currency,” he said.

“If we want to be involved in creating economic prosperity then we must start from ourselves.”