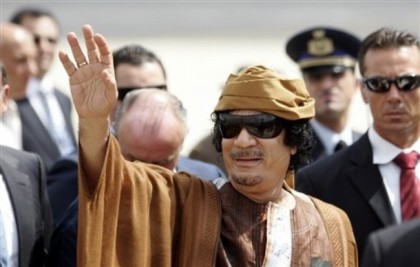 Libya’s embattled leader, Col. Muammar el-Qaddafi, who crushed his country’s Islamic movement during his 41-year rule, turned in the past week to Saudi Islamic scholars in a bid for religious backing in the face of the spreading rebellion against his regime.

Colonel Qaddafi’s attempt to woo religious leaders came after several moral figures, both inside and outside Libya, backed the pro-democracy protesters.

Sheik Ayed al-Qarni, a prominent Saudi cleric who has written best-selling books and been featured on popular television shows in Arab countries, said Sunday that he had refused an appeal in a phone call from one of Colonel Qaddafi’s sons, Saadi el-Qaddafi, to issue a fatwa, or religious edict, banning demonstrations against his father’s rule.

“Saadi, Qaddafi’s son, asked me to say a word against the protests,” Sheikh Qarni told Al Arabiya television, which is based in Dubai. “I refused to back him because they were killing innocent people, killing old men and peaceful demonstrators.”

Instead of supporting Colonel Qaddafi, the cleric issued a fatwa against him, saying it was “a religious obligation” to fight oppressors and to provide medical and humanitarian help for the protesters. Those who died trying to liberate their country from dictators were “martyrs,” he said. “This is, in fact, a blessed revolution against tyranny.”

Another Saudi cleric, Salman al-Ouda, whose books are distributed to millions of pilgrims in Saudi Arabia every year, reported receiving a similar telephone call from another of Colonel Qaddafi’s sons, Seif al-Islam el-Qaddafi.

Sheik Ouda said at a news conference that he refused to back the Libyan regime because of its “injustices against the Libyan people.”

“Those regimes are looking for legitimacy. But that regime has reached its end,” he said on his Web site, Islamtoday.net. “That regime is not offering security and peace to the people but it is offering the opposite.”

Mainstream Islamic Web sites mocked the attempts by Colonel Qaddafi’s sons to drum up religious support. “Qaddafi’s sons beg around for fatwas against the revolution,” said a headline on OnIslam.net, a spiritual and religious Web site.

Colonel Qaddafi has often made enemies of Islamic scholars. At one point he sought to market his Green Book, in which he spells out his philosophy, as an alternative to the Koran, a presumption that earned him the title “kafir” or non-believer, from the Saudi Council for Grand Scholars, Saudi Arabia’s highest fatwa authority, 30 years ago. Copies of that fatwa went viral online after the Feb. 17 revolt against Colonel Qaddafi’s rule.

According to the U.S. State Department and many human rights organizations, Colonel Qaddafi has arrested hundreds of Islamic activists for speaking against his rule in the past.

“The government held many political detainees incommunicado for unlimited periods in unofficial detention centres controlled by branches of the security services,” the State Department’s 2009 Human Rights Report on Libya said. “The government reportedly held political detainees, including as many as 100 associated with banned Islamic groups, in prisons throughout the country, but mainly in the Ayn Zara, Jadida, and Abu Salim prisons in Tripoli,” the report said. “Some human rights organizations and foreign diplomats speculated there were 2,000 political detainees, many held for years without trial. Hundreds of other detainees may have been held for periods too brief to permit confirmation by outside observers.”

In Libya, the grandson of the historic resistance leader Omar al-Mukhtar, who led the Libyan fight against the Italian occupation for 20 years in the 1910s and 1920s, has declared support for the anti-government rebels. Omar al-Mukhtar, remembered as the Godfather of Libyan nationalism, was wounded in battle, captured and hanged by the Italians.

“All the tribes are united and our capital will forever remain Tripoli from the borders on the east to borders on the west,” the grandson, Mohammed al-Mukhtar told Al Arabiya. “I support the revolution of the young.”

Colonel Qaddafi, who is facing the first real challenge to his grip on Libya since he came to office in a 1969 coup, has threatened his people with a bloody civil war, country divisions on tribal lines, the loss of oil and even foreign occupation if they continued their uprising against him.

Mr. al-Mukhtar’s statement could be a rallying point for Libya’s five major tribes against Qaddafi’s call for division.

Other Libyan religious scholars and national figures have also spoken out against the brutality of the regime.

“Those who kill or help kill protesters have committed a major sin,” said the Shariah Scholars Society in Libya in a statement last week.

“We appeal to every Muslim, within the regime or assisting it in any way, to recognize that the killing of innocent human beings is forbidden by our Creator and by His beloved Prophet of Compassion,” said the statement, which was signed by dozens of religious leaders.

The influential Libyan preacher, Imam Sadeq al-Gheryani, was among the first to back the uprising, praising the revolt.

His edict was endorsed later by Sheik Ali Mohammed al-Selabi, who is considered to be the most influential religious scholar among Libyans abroad. Sheik Selabi is based now in Qatar, where he makes frequent appearances on Al Jazeera television.

Outside of Libya, Colonel Qaddafi was losing the fatwa war, too.

Sheik Ahmed el-Tayeb, head of al-Azhar University in Cairo, one of the most prominent seats of Sunni learning, condemned Colonel Qaddafi as an “oppressor.”

The Grand Sheikh of al-Azhar called on army officers and heads of the police force in Libya “not to take orders” from the Qaddafi regime to shoot at the protesters.

“A leader has no justification in Islam to shed blood to keep his worldly reign against the will of the people,” Sheik Tayeb said.

But perhaps the most serious religious opinion came last week from Sheikh Youssef al-Qaradawi, a widely respected cleric based in Qatar, who heads the Islamic Scholars Authority, an independent group that gathers dozens of Islamic scholars from across Muslim countries and seeks to unify mainstream religious opinions across.

Sheikh Qaradawi said Colonel Qaddafi had been responsible for many deaths in the country after he unleashed his forces against the protesters, killing hundreds.

It is now religiously permissible, he said, to “put a bullet to Qaddafi’s head in order to end to the bloodshed.”