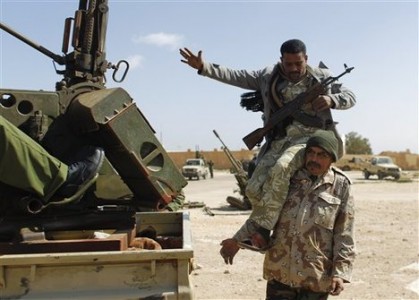 As the defectors from the Libyan army organize the weapons they have recovered from Muammar Gaddafi’s strongholds in the region, thousands of Libyan men are volunteering to join the soldiers in a possible attack on Tripoli to oust Gaddafi from power.

On Tuesday at a basketball court behind a local high school, soldiers were teaching marching techniques to new recruits –ranging from 18 to 60 years old. An officer at a nearby desk jotted down the names and blood types of the volunteers.

Over the past two days this recruiting station has assembled about 4,000 people, the officer said. At a larger army base outside of Benghazi, the total volunteer force is reported to number around 10,000.

“I want my country to be free from Gaddafi and free from the 41 years of hell he has brought us,” said Salem Abdelhassid El Dressy, an accountant for an electricity company and father of two.

“Gaddafi seized power the year I was born, and it’s time for a change. I think there will be massive fighting if we go to Tripoli. I hope to god I am wrong. But I am ready to fight. All my friends and family feel the same, that Gaddafi has to leave. We all want to go to Tripoli to get rid of him.”

The outpouring of bile in Benghazi against the Libyan leader conflicts is vastly different from the claims on television that the people love him. Increasingly, Gaddafi’s public appearances diverge from reality.

On Tuesday the U.S. Ambassador to the United Nations Susan Rice called Gaddafi “delusional”. People here are angry that Gaddafi can deny inciting violence when hospitals here are still operating on people with gunshot wounds. Doctors speak of victims arriving in pieces from the use of artillery against them.

Soldiers and citizens liberated Benghazi from Gaddafi’s grip on Feb. 20 after his men and mercenaries began shooting indiscriminately at people in the streets, killing hundreds and injuring thousands. Doctors interviewed said they worked without sleep for five days to cope with the victims.

Since Benghazi drove out the regime, this city of around 800,000 people on the Mediterranean coast has become the seat of the resistance movement against Gaddafi. Local leaders and military officers have formed committees to administrate the eastern, rebel-controlled part of the country.

Most stores in town remain closed and services are minimal, but the city is functioning. Anti-Gaddafi protesters congregate in front of the Supreme Court building daily, waving pre-Gaddafi green, black and red flags, and chanting anti-regime songs and slogans.

Elsewhere in the country, rebels in Zawiya, around 50 kilometres from Tripoli, are reported to have repelled an attack by Gaddafi’s forces trying to retake the town. Pro-Gaddafi soldiers remained outside of Zawiya on Tuesday.

International condemnation of Gaddafi’s use of force against civilians is growing, and more countries and companies are freezing the Gaddafi family’s assets. The European Parliament discussed new measures while the Libyan embassy in Washington replaced the regime’s flag with the rebel flag.

And while army officers train their recruits for a possible march on the capital, next door at the Salmani weapons maintenance depot, rebel soldiers were organizing the arsenal found in Gaddafi’s military bunkers in and around the city. According to tank commander Colonel Mohammed Samir Al-Abar, the army is split on the one hand between Gaddafi’s tribe, sycophants and mercenaries, and on the other, about everyone else.

“The high-ranking officers worship Gaddafi, they are completely controlled,” Al-Abar said. “They don’t have the true Libyan spirit. I have people with me who are ready to fight. Each officer here has a group like this. The tanks are ready. And the resolve of the people is as solid as a rock.”

Now their determination is supported by guns, albeit ones dating to the 1970s and with many in storage just as long. Soldiers have been cleaning and re-assembling all manner of weaponry for days. On Tuesday, they focused on their Russian-made anti-aircraft guns, giving people a jolt when they popped off several rounds to see if they worked.

“Gaddafi never gave us any equipment,” said Adel Mustafa, a reserve soldier. “He didn’t trust the regular army, only his own people. But now, the people took control of the weapons after each military base fell.

“These anti-aircraft guns, for example, keep the airplanes high. It’s out-dated and dirty equipment, but they still work. Before the people captured these guns, the regime was using them against people. Take a look at the size of the ammunition –when it hits a human being it shatters them. They were designed to be used against planes, not people. But Gaddafi used them to kill his own people.”

Gaddafi’s options seem limited – he has said he will never voluntarily leave Libya and no country has hinted that the Libyan leader was welcome there. Holed up in with his loyalists and mercenaries in Tripoli, Gaddafi may try to fight to the end. Benghazi’s rag-tag army of second-tier soldiers and accountants, however, are more than willing to give him that fight.