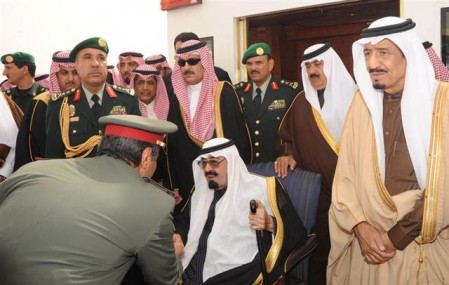 But some of the biggest handouts over the past two decades have gone to his own extended family, according to unpublished American diplomatic cables dating back to 1996.

The cables, obtained by WikiLeaks and reviewed by Reuters, provide remarkable insight into how much the vast royal welfare program has cost the country — not just financially but in terms of undermining social cohesion.

Besides the huge monthly stipends that every Saudi royal receives, the cables detail various money-making schemes some royals have used to finance their lavish lifestyles over the years. Among them: siphoning off money from “off-budget” programs controlled by senior princes, sponsoring expatriate workers who then pay a small monthly fee to their royal patron and, simply, “borrowing from the banks, and not paying them back.”

As long ago as 1996, U.S. officials noted that such unrestrained behaviour could fuel a backlash against the Saudi elite. In the assessment of the U.S. embassy in Riyadh in a cable from that year, “of the priority issues the country faces, getting a grip on royal family excesses is at the top.”

A 2007 cable showed that King Abdullah has made changes since taking the throne six years ago, but recent turmoil in the Middle East underlines the deep-seated resentment about economic disparities and corruption in the region.

A Saudi government spokesman contacted by Reuters declined to comment.

The November 1996 cable — entitled “Saudi Royal Wealth: Where do they get all that money?” — provides an extraordinarily detailed picture of how the royal patronage system works. It’s the sort of overview that would have been useful required reading for years in the U.S. State department.

It begins with a line that could come from a fairy-tale: “Saudi princes and princesses, of whom there are thousands, are known for the stories of their fabulous wealth — and tendency to squander it.”

The most common mechanism for distributing Saudi Arabia’s wealth to the royal family is the formal, budgeted system of monthly stipends that members of the Al Saud family receive, according to the cable. Managed by the Ministry of Finance’s “Office of Decisions and Rules,” which acts like a kind of welfare office for Saudi royalty, the royal stipends in the mid-1990s ran from about $800 a month for “the lowliest member of the most remote branch of the family” to $200,000-$270,000 a month for one of the surviving sons of Abdul-Aziz Ibn Saud, the founder of modern Saudi Arabia.

“Bonus payments are available for marriage and palace building,” according to the cable, which estimates that the system cost the country, which had an annual budget of $40 billion at the time, some $2 billion a year.

“The stipends also provide a substantial incentive for royals to procreate since the stipends begin at birth.”

After a visit to the Office of Decisions and Rules, which was in an old building in Riyadh’s banking district, the U.S. embassy’s economics officer described a place “bustling with servants picking up cash for their masters.” The office distributed the monthly stipends — not just to royals but to “other families and individuals granted monthly stipends in perpetuity.” It also fulfilled “financial promises made by senior princes.”

The head of the office at the time, Abdul-Aziz al-Shubayli, told the economics officer that an important part of his job “at least in today’s more fiscally disciplined environment, is to play the role of bad cop.” He “rudely grilled a nearly blind old man about why an eye operation promised by a prince and confirmed by royal Diwan note had to be conducted overseas and not for free in one of the first-class eye hospitals in the kingdom.” After finally signing off on a trip, Shubayli noted that he himself had been in the United States twice for medical treatment, once for a chronic ulcer and once for carpal tunnel syndrome. “He chuckled, suggesting that both were probably job-induced.”

But the stipend system was clearly not enough for many royals, who used a range of other ways to make money, “not counting business activities.”

“By far the largest is likely royal skimming from the approximately $10 billion in annual off-budget spending controlled by a few key princes,” the 1996 cable states. Two of those projects — the Two Holy Mosques Project and the Ministry of Defence’s Strategic Storage Project — are “highly secretive, subject to no Ministry of Finance oversight or controls, transacted through the National Commercial Bank, and widely believed to be a source of substantial revenues” for the then-King and a few of his full brothers, according to the authors of the cable.

In a meeting with the U.S. ambassador at the time, one Saudi prince, alluding to the off-budget programs, “lamented the travesty that revenues from ‘one million barrels of oil per day’ go entirely to ‘five or six princes,'” according to the cable, which quoted the prince.

Then there was the apparently common practice for royals to borrow money from commercial banks and simply not repay their loans. As a result, the 12 commercial banks in the country were “generally leary of lending to royals.”

The managing director of another bank in the kingdom told the ambassador that he divided royals into four tiers, according to the cable. The top tier was the most senior princes who, perhaps because they were so wealthy, never asked for loans. The second tier included senior princes who regularly asked for loans. “The bank insists that such loans be 100 per cent collateralized by deposits in other accounts at the bank,” the cable reports. The third tier included thousands of princes the bank refused to lend to. The fourth tier, “not really royals, are what this banker calls the ‘hangers on’.”

Another popular money-making scheme saw some “greedy princes” expropriate land from commoners. “Generally, the intent is to resell quickly at huge mark-up to the government for an upcoming project.” By the mid-1990s, a government program to grant land to commoners had dwindled. “Against this backdrop, royal land scams increasingly have become a point of public contention.”

The cable cites a banker who claimed to have a copy of “written instructions” from one powerful royal that ordered local authorities in the Mecca area to transfer to his name a “Waqf” — religious endowment — of a small parcel of land that had been in the hands of one family for centuries. “The banker noted that it was the brazenness of the letter … that was particularly egregious.”

Another senior royal was famous for “throwing fences up around vast stretches of government land.”

The confiscation of land extends to businesses as well, the cable notes. A prominent and wealthy Saudi businessman told the embassy that one reason rich Saudis keep so much money outside the country was to lessen the risk of ‘royal expropriation.'”

Finally, royals kept the money flowing by sponsoring the residence permits of foreign workers and then requiring them to pay a monthly “fee” of between $30 and $150. “It is common for a prince to sponsor a hundred or more foreigners,” the 1996 cable says.

The U.S. diplomats behind the cable note wryly that despite all the money that has been given to Saudi royals over the years there is not “a significant number of super-rich princes … In the end,” the cable states, Saudi’s “royals still seem more adept at squandering than accumulating wealth.”

But the authors of the cable also warned that all that money and excess was undermining the legitimacy of the ruling family. By 1996, there was “broad sentiment that royal greed has gone beyond the bounds of reason”. Still, as long as the “royal family views this country as ‘Al Saud Inc.’ ever increasing numbers of princes and princesses will see it as their birth-right to receive lavish dividend payments, and dip into the till from time to time, by sheer virtue of company ownership.”

In the years that followed that remarkable assessment of Saudi royalty, there were some official efforts toward reform — driven in the late 1990s and early 2000s in particular by an oil price between $10-20 a barrel. But the real push for reform began in 2005, when King Abdullah succeeded to the throne, and even then change came slowly.

By February 2007, according to a second cable entitled “Crown Prince Sultan backs the King in family disputes”, the reforms were beginning to bite. “By far the most widespread source of discontent in the ruling family is the King’s curtailment of their privileges,” the cable says. “King Abdullah has reportedly told his brothers that he is over 80 years old and does not wish to approach his judgment day with the ‘burden of corruption on my shoulder.'”

The King, the cable states, had disconnected the cell phone service for “thousands of princes and princesses.” Year-round government-paid hotel suites in Jeddah had been cancelled, as was the right of royals to request unlimited free tickets from the state airline. “We have a first-hand account that a wife of Interior minister Prince Naif attempted to board a Saudia flight with 12 companions, all expecting to travel for free,” the authors of the cables write, only to be told “to her outrage” that the new rules meant she could only take two free guests.

Others were also angered by the rules. Prince Mishal bin Majid bin Abdulaziz had taken to driving between Jeddah and Riyadh “to show his annoyance” at the reforms, according to the cable.

Abdullah had also reigned in the practice of issuing “block visas” to foreign workers “and thus cut the income of many junior princes” as well as dramatically reducing “the practice of transferring public lands to favoured individuals.”

The U.S. cable reports that all those reforms had fuelled tensions within the ruling family to the point where Interior Minister Prince Naif and Riyadh Governor Prince Salman had “sought to openly confront the King over reducing royal entitlements.”

But according to “well established sources with first hand access to this information,” Crown Prince Sultan stood by Abdullah and told his brothers “that challenging the King was a ‘red line’ that he would not cross.” Sultan, the cable says, has also followed the King’s lead and turned down requests for land transfers.

The cable comments that Sultan, long time defence minister and now also Crown Prince, seemed to value family unity and stability above all.