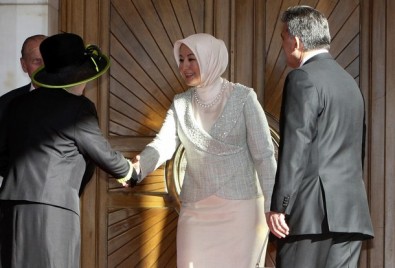 Emine Erdoğan and Hayrünnisa Gül have long been criticized on the pretext that they do not represent all Turkish women. The reason was obvious: Both of them wear a headscarf.

Even in Arab countries, the wives of some leaders dress in modern clothes and do not wear a headscarf.

Protests first started in Tunisia and then in Egypt. These events show that the real issue is not the headscarf, but democracy.

If democracy ushers in a headscarf-wearing first lady, then it must not be all that great. Is advancement a simple matter that is subject to what people wear? According to some, the answer is yes. How so?

Let’s recall the recent past. Abdullah Gül is the newly elected president, and Turkey is confused about the idea of having a first lady who wears a headscarf.

Below is a picture from the Çankaya presidential palace. Hayrünnisa Gül is standing next to Syrian President Bashar al-Assad. Right next to him is Abdullah Gül and next to him is Esma Assad, completing the picture. 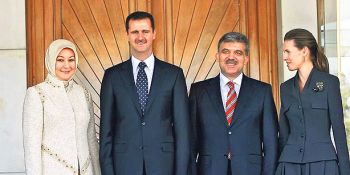 Thus began a plethora of ceaseless debates regarding the differences between the first ladies. The difference is clear: Gül wears a headscarf, but Assad does not. Or as the media described it “one prefers to wear a headscarf and the other prefers to dress modern.” It is a serious test for those who see the headscarf as a problem and face a challenge in approving of it to be represented by a headscarf-wearing first lady. It is the first time people have had to get used to the idea. People need time to get used to it. But then, of course, there are those who don’t want to get used to it. According to some people, the headscarf is in complete contrast to the image of a first lady. A first lady is supposed to don a suit, put on sunglasses and complement her outfit with high heels. But most importantly she is supposed to either let her hair down or put it up in a style. Never is she supposed to cover it. Erdoğan and Gül were viewed from this perspective for a very long time. Any time they accompanied the wife of another president or prime minister, they were always compared and criticised. Sometimes they were even insulted. After all they did not have the contemporary image to represent Turkish women.

A certain group of people were unable to bring themselves to like the first ladies. Their rejection became more pronounced any time they met with first ladies from Muslim countries who did not wear a headscarf. They believed it was meaningless to insist on the headscarf when even the first ladies of Muslim countries were wearing modern clothing. In an effort to “teach them a lesson” they listed the names of all first ladies of Muslim countries who did not wear a headscarf and wrote articles under the heading “They uncovered, we covered.” Everyone was on the list: Princess Lalla Selma, the wife of Morocco’s King Mohammed VI; Suzanne Mubarak, the wife of Egyptian President Hosni Mubarak; Siti Hasmah Mohamad Ali, the wife of Malaysian Prime Minister Mahathir Muhammad; Begum Sehba, the wife of former Pakistani President Pervez Musharraf; Queen Rania of Jordan; Esma Assad, the wife of the Syrian president; and Safia Farkash Albarassi, the wife of Libyan President Muammar Qaddafi. While columnists complimented the leaders’ wives who did not wear headscarves, they disparaged Erdoğan and Gül. Hıncal Uluç did not refrain from commenting on the issue and wrote that he admired the wives of Arab leaders who did not wear a headscarf. The Association of Turkish Women in Europe filed a criminal complaint against Gül and Erdoğan on the grounds that they were misrepresenting Turkish women.

‘Modern clothing’ was not enough to persuade the people

Those who had become accustomed to linking advancement with the headscarf did not change their attitude. Those who once worried that Turkey was becoming like Arab countries started viewing Turkey as being even more backward by looking at the non-headscarf-wearing wives of Arab leaders. They had had gone so far that they did not fear any backlash for saying things like “As long as his wife does not wear a headscarf, it doesn’t matter if he’s a dictator.” But recent events in Egypt and Tunisia show that the issue isn’t the headscarf, it is democracy. First the people in Tunisia revolted. They protested Zine El Abidine Ben Ali, who made no concessions on his luxurious lifestyle even though the people lived in poverty. The first person to flee the country was his wife, Leyla bin Ali, who was an example for the public with her modern style of dress. According to the claims of France’s reputable daily Le Monde, she took 1.5 tons of gold with her. After Tunisia, Egypt started shaking. Thousands of people took to the streets to protest Mubarak, who had ruled the country with an iron fist for 30 years. His wife, Suzanne Mubarak, fled to London along with her family and 97 pieces of luggage. Now everyone is pointing to Turkey as a role model for other Muslim countries.