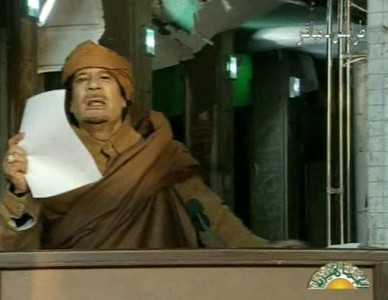 Col Muammar Gaddafi’s speeches this week will have struck many viewers as crazy and perhaps pathetic, with their overblown rhetoric, theatrical delivery and furious calls to arms against the “drug-takers” who oppose him.

But the speech on Tuesday – broadcast live on television from what looked like a ruined garden shed – brought huge crowds out into the streets celebrating into the early hours with music and fireworks.

Oratory is out of fashion with us – no longer do our statesmen hold the House of Commons in thrall for eight hours at a go. But Mr Gaddafi is also a bad joke throughout the Arab world outside Libya. How can that be?

The Arabic language is rich and powerful. Even to a Christian, some parts of the Koran are poetic, almost magical (the magic is totally lost in translation).

It is also the single most important bond uniting the Arabs, who are otherwise so diverse.

But it has a problem. The educated form of the language, based on the Koran, is literally nobody’s mother tongue. All Arabs speak a local dialect. If they are educated, especially if their education is traditional, they aspire to speak correctly, but scarcely ever quite make it.

Hence the common remark to a foreigner who has learned his Arabic from a grammar book is: “You speak Arabic better than I do.”

In this respect, Mr Gaddafi scarcely even tries. For the most part he speaks Libyan dialect, and Arabic dialects are not fully understood by Arabs from other regions.

There was a dramatic incident at an Arab summit when the King Abdullah of Saudi Arabia cursed Mr Gaddafi in language I have never heard used in polite society. Perhaps, fortunately, the Libyan leader didn’t understand, so he asked the then President of Egypt Hosni Mubarak what King Abdullah had said.

The microphones were switched off as Mubarak started to reply.

Mr Gaddafi is also hard to understand, unless you are Libyan born and bred. He spoke at the London School of Oriental and African Studies by direct satellite link a few years ago, on his pet subject Palestine.

His solution is a single state composed of Israel and Palestine and called Isratine, which, of course, infuriates Israelis and Palestinians alike.

The voice transmission was poor, and a bad interpreter was speaking at the same time as Mr Gaddafi, so the result was 90% unintelligible. At the end, the chairman of the session apologised to the audience for the gobbledygook, turned to me, and invited me to summarise what the Libyan leader had said. Luckily I had read up his theories, so I just made it up. Of such incidents is international understanding born.

Mr Gaddafi’s personal style is recognizably that of his Bedouin background. Bedouin have plenty of time and talk a lot when there is anyone to talk to.

He regularly goes on for three or four hours at a stretch.

Add to that, for 40 years or so there has been no-one around to tell Mr Gaddafi to shut up. He speaks without notes and says the first thing that comes into his head.

I remember talking to one of his cousins a few years ago, and saying that the Libyan leader’s speeches, always fiery and nearly always anti-Western and anti-capitalist, undermined the efforts he was making to attract investment to Libya. His ministers had to work hard to repair the damage he caused to his own policies.

His cousin smiled and asked me to repeat my comment more slowly so that his secretary could write it down.

One of Mr Gaddafi’s most striking characteristics is that he loves to surprise. In a speech in Addis Ababa he attacked the Ethiopians for what he perceived as racism, accusing them of stuffing the bureaucracy of the African Union with anything but Arabs.

“If you don’t change your policy,” he said, “I will take Libya out of Africa and put it back into Europe”.

I thought his speech on Tuesday, if not actually pathetic, was desperate. But what I think is not the point. The speech was addressed to his supporters and potential supporters, and it seems to have scored.

By the way, the ruined garden shed was his family home struck by American missiles in an attempt to kill him in 1986. Since then, it has been a compulsory item on the tourist circuit for VIP visitors.