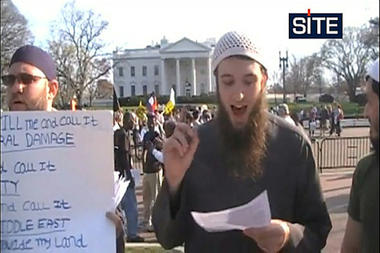 Zachary Chesser of Virginia, who converted to a militant form of Islam, had pleaded guilty to three charges, including threatening the lives of ‘South Park’ writers and participants in ‘Everybody Draw Mohammed Day.’

This undated file picture released by the SITE Institute on July 21, 2010, shows Zachary Adam Chesser standing in front of the White House in Washington. Mr. Chesser was sentenced Thursday, having pleaded guilty in October to providing material support to a US-designated terrorist group and making threats against the writers of the ‘South Park’ TV show and other cartoonists.

A Muslim convert and college dropout was sentenced to 25 years in prison on Thursday after pleading guilty to attempting to provide material support to a Somali-based terrorist group and threatening the lives of the writers of the “South Park” satiric television show for portraying the prophet Muhammad in a bear suit.

Zachary Adam Chesser, 21, of Fairfax, Va., had also posted on a militant Islamic website the names and addresses of participants in another satiric effort, an “Everybody Draw Mohammed Day” sponsored by a group of artists on Facebook. He advised the militant Muslim followers of the website: “Just a place to start.”

Lawyers for Mr. Chesser portray him as a confused, immature person who tended to dive wholeheartedly into new experiences. In an 18-month period in 2009 and 2010, he went from being a student at George Mason University to converting to Islam and becoming a close follower of radical Muslim cleric Anwar al-Awlaki. In the process he came to embrace the most violent form of Islam advocated by Al Qaeda and other Muslim terror groups.

Since his arrest last year, Chesser has repudiated violence and says he feels remorse for his earlier conduct. His lawyers had urged that he receive a 20-year sentence.

Federal prosecutors asked the judge to send Chesser to prison for 30 years.

In court filings, prosecutors argued that the injury Chesser caused to the nation is ongoing and open-ended. “There is nothing that Chesser can ever do or say that will remedy the tremendous harm he has already caused to our society as a whole,” Assistant US Attorney Gordon Kromberg wrote in a brief.

He said Internet-based threats Chesser placed on militant websites made “people shrink back from expressing their opinions – or even telling a joke – lest they be accused of being an enemy of Islam for whom beheading is the only appropriate punishment.”

The prosecutor added that Chesser’s victims “will continue to be at risk of kidnapping and beheading for years (if not the rest of their lives) because of his actions.”

Chesser’s lawyer, Federal Public Defender Michael Nachmanoff, acknowledged that his client’s threats were serious, but he said they did not carry the weight of similar pronouncements made by Ayatollah Khomeini against author Salman Rushdie.

“Unlike threats from deviant Islamic leaders who arguably possess religious credentials and who, as leaders of countries or mosques also have adherents to their teachings, Mr. Chesser’s call to violence, thankfully, appears to have received little attention, which is not surprising given its source,” Mr. Nachmanoff wrote in his brief to the court.

Chesser pleaded guilty in October to three federal charges. He attempted to provide material support to the Somali-based al-Shabaab organization, which has been designated a foreign terrorist group by the US government.

He has admitted that he tried to board a plane from New York to Uganda with the intent of eventually joining members of al-Shabaab in Somalia. He said he brought his infant son on the journey in an effort to disguise his intention of traveling overseas to engage in what he considered a holy war.

Chesser was intercepted before his plane could depart. He later told investigators that he planned to walk across the border from Uganda into Kenya and then across the Kenyan border into Somalia.

Chesser also admitted that he used militant websites on the Internet to urge Muslims in the US to leave suspicious packages in public places to desensitize US law enforcement officials to the threat of small bombs. The effort was part of a plan to increase the carnage during a presumed future campaign involving real bombs.

The defendant also pleaded guilty to soliciting violence from fellow Muslims against those he perceived as insulting the dignity of Islam. The threats were issued over the “South Park” program and the Draw Mohammed Day effort on Facebook.

“Zachary Chesser will spend 25 years in prison for advocating the murder of US citizens for engaging in free speech about his religion,” said US Attorney Neil MacBride in a statement.

“The fact that a young man from northern Virginia could support such violence and terror is a sobering reminder of the serious threat that home-grown jihadists pose to this country,” he said.