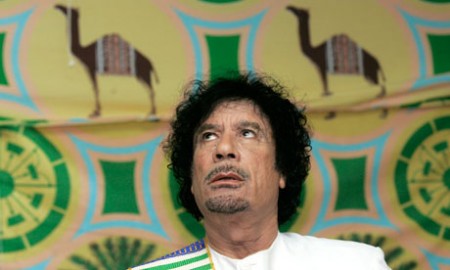 Muammar Gaddafi, the Libyan leader, clings to power in the face of mass protests demanding  his resignation, as parts of the country’s state structure appear to be disintegrating around him.

Fears are growing that Libya’s state apparatus, once seen as a powerful and coherent entity, is facing collapse as key officials quit the government, with some joining the protesters, and as international isolation mounts.

Speaking in a televised address on Tuesday evening, Gaddafi vowed to fight on and die a “martyr” on Libyan soil. He called on his supporters to take back the streets on Wednesday from protesters who are demanding that he step down.

He also claimed that he had “not yet ordered the use of force”, warning that “when I do, everything will burn”.

Gaddafi, who termed the protests an “armed rebellion”, said that security cordons set up by police and the military would be lifted on Wednesday, telling his supporters to “go out and fight [anti-government protesters]”.

He blamed the uprising in the country on “Islamists”, and warned that an “Islamic emirate” has already been set up in Bayda and Derna, where he threatened the use of extreme force.

“I am a fighter, a revolutionary from tents … I will die as a martyr at the end,” Gaddafi, who has been in power for 41 years, said.

Several hundred people held a pro-Gaddafi rally in central Tripoli on Tuesday night, cheering the Libyan leader as he made his speech.

Demonstrators in the eastern city of Benghazi, which is now controlled by anti-government protesters, angrily threw shoes at a screen showing the address.

While Gaddafi has insisted that the country is stable, however, international leaders have warned that the growing violence and increasing numbers of government and military renouncements of Gaddafi’s leadership indicate that the state structure is in critical danger.

William Hague, the British foreign minister, has said that there are “many indications of the structure of the state collapsing in Libya”.

“The resignation of so many ambassadors and diplomats, reports of ministers changing sides within Libya itself, shows the system is in a very serious crisis,” he said.

Libyan diplomats across the world have either resigned in protest at the use of violence against citizens, or renounced Gaddafi’s leadership, saying that they stand with the protesters.

Late on Tuesday night, General Abdul-Fatah Younis, the country’s interior minister, became the latest government official to stand down, saying that he was resigning to support what he termed as the “February 17 revolution”.

He urged the Libyan army to join the people and their “legitimate demands”.

On Wednesday, Youssef Sawani, a senior aide to Saif al-Islam Gaddafi, one of Muammer Gaddafi’s sons, resigned from his post “to express dismay against violence”, Reuters reported.

Earlier, Mustapha Abdeljalil, the country’s justice minister, had resigned in protest at the “excessive use of violence” against protesters, and diplomat’s at Libya’s mission to the United Nations called on the Libyan army to help remove “the tyrant Muammar Gaddafi”.

A group of army officers has also issued a statement urging soldiers to “join the people” and remove Gaddafi from power.

Swathes of the country now appear to be out of Gaddafi’s control. Benghazi, the country’s second largest city, was “taken” by protesters after days of bloody clashes, and soldiers posted there are reported to have deserted and joined the anti-government forces.

On Wednesday morning, Kharey, a local resident, told Al Jazeera that “normal traffic” was flowing on Benghazi’s streets, but that demonstrations may take place later in the day near court buildings.

He said that people in Benghazi were forming committees to manage the affairs of the city, and that similar committees were being set up in the towns of Beyda and Derna.

Several other cities in the country’s east are said to be under the control of protesters, including Tobruk, where a former army major told the Reuters news agency: “All the eastern regions are out of Gaddafi’s control … the people and the army are hand-in-hand here.”

The Warfalla tribe, the largest in the country, has also joined calls from other tribes for Gaddafi to stand down.

The Network of Free Ulema (Libya), a group of clerics, released a statement on Wednesday expressing their “full support” for what they refer to as the “new Libyan government” in the eastern part of the country.

The country is also facing growing international isolation, and late on Tuesday, the United Nations Security Council expressed “grave concern” at the situation in the country, condemning the use of force against civilians.

A statement signed by all 15 members of the council said that the UNSC “deplored the repression against peaceful demonstrators, and expressed deep regret at the deaths of hundreds of civilians”.

The council called for “steps to address the legitimate demands of the population”.

The United Nations Human Rights Council is to hold a special session on February 25 to discuss the crisis in Libya, following a request from the European Union, an official for the council said on Wednesday.

Earlier, following Gaddafi’s speech, the Arab League barred Libya from attending meetings of the bloc until it stops cracking down on anti-government protesters. The league strongly condemned what it called crimes against civilians, the recruiting of foreign mercenaries and the use of live ammunition, according to a statement read by Amr Moussa, the body’s secretary-general.

On Wednesday, the African Union also conducted a “security meeting” on the situation in Libya.

Several countries, including Britain, the United States, Italy, France, Turkey, India, Sri lanka, Nepal, Bangladesh and Greece have put into place arrangements for the evacuation of their citizens from the country. France and other countries have called for economic sanctions to be placed on Libya.

Hillary Clinton, the US secretary of state, said on Tuesday that the use of violence was “completely unacceptable”.

The UNSC’s statement stopped short of declaring Libyan airspace a no-fly zone, after diplomats called for the step to be taken following reports that warplanes had been used throughout Monday to bomb civilian targets in Tripoli.

Violence has continued to rage in Libya since an anti-government crackdown on demonstrations began on February 17. Human Rights Watch, a US-based rights watchdog, says that at least 295 people have been killed since violence began.

Naji Abu-Ghrouss, an interior ministry official, said 197 civilians and 111 in the military have been killed in violence so far.

On Wednesday, however, Franco Frattini, the Italian foreign minister, said estimates of 1,000 dead were “credible”. Frattini also said that the eastern province of Cyrenaica was no longer under Gaddafi’s control.

Witnesses in Tripoli and other cities have reported that foreign mercenaries have been patrolling the streets, firing indiscriminately on those they encounter in a bid to keep people off the streets. In addition, air strikes have also been reported against civilian targets.

The government claims that while warplanes have been used in recent days, they were targeting arms depots and that the targets were not in residential areas.

On Tuesday, Navi Pillay, the UN’s high commissioner for human rights, said that widespread and systematic attacks against civilians “may amount to crimes against humanity”.

On Wednesday, French energy giant Total said that it was suspending part of its operations in Libya. The announcement came after Italy’s Eni and Spain’s Repsol-YPF shut down operations in the country, and Royal Dutch Shell evacuated all personnel.

Oil prices have been pushed to two-and-a-half year highs, on the back of fears that instability in Libya will affect world supplies of the commodity.