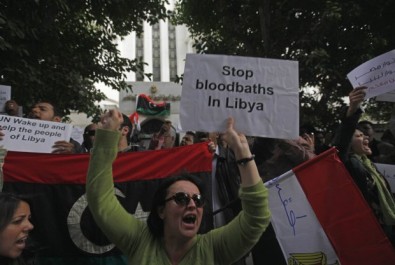 Tens of thousands of foreigners are trying to flee Libya, after clashes between security forces and protesters reportedly left hundreds dead.

Egypt has boosted its military near the border and set up field hospitals, as thousands of its nationals return.

Several countries are evacuating their citizens and oil companies are relocating expat staff.

Correspondents in Tripoli say the capital is calm but there is a sense of intimidation after a night of fighting.

Speaking to state TV from outside a ruined building, he said: “I am in Tripoli and not in Venezuela,” after rumours that he had flown to Caracas.

Libyan embassy officials here have joined their colleagues around the world in condemning Muammar Gaddafi for the killing of people who took part in the anti-government protest in their country.

In a statement, Ms Pillay condemned the “callousness with which Libyan authorities and their hired guns are reportedly shooting live rounds of ammunition at peaceful protesters”.

The UN Security Council is to meet in closed session to discuss Libya later in the day.

The Arab League will also hold an emergency session.

In related news, Libyan Embassy officials joined about 300 Libyans who are mostly students in a peaceful demonstration outside the embassy here.

The protesters burned a portrait of Gaddafi in the two-hour demonstration before the police ordered them to leave.

“We strongly condemn the … elimination of our innocent civilians who were unarmed when they conducted a peaceful demonstration demanding their basic right of living like any other human being around the globe.

“…we would like to declare openly our support (for) and firm stand with our Libyan nationals,” the statement said.

A protester, Ahmad Al-Hariri, said that he and the other demonstrators had friends and families killed.

He said that it was time for Gaddafi to leave after 43 years in power.

The Libya Embassy’s Head Of Mission, Mohamed A.A. Alnfati, could not be reached for comment.

According to foreign reports, the country’s ambassador to India has resigned while others around the world want the United Nations to step in to protect the people of Libya.

Around 10,000 Egyptian nationals based in their western neighbour are fleeing the violence. Thousands have already returned from Libya since the protests began almost a week ago.

The Egyptian army has set up two field hospitals on the border to deal with the sick and injured.

Egypt says it will send at least four aircraft to evacuate its citizens.

But Foreign Minister Ahmed Aboul Gheit said the airport at Benghazi had been destroyed and there were problems getting flight permits.

“We know there are about one million to 1.5 million Egyptians in Libya, therefore we recommend to our citizens that you stay in your homes, stay off the streets, secure yourselves with water and food,” he said.

Meanwhile unconfirmed media reports said at least 300 foreign construction workers employed by a South Korean company, about 100 of them from Bangladesh, were being held hostage, possibly by protesters, in the eastern port of Darnah.

There are about 50,000 Bangladeshis currently working in Libya.