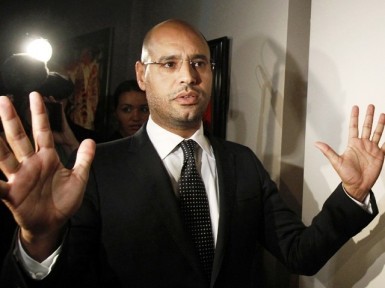 Appearing on Libyan state television, Seif al-Islam Gaddafi says his father is in the country and has support of army.

Seif al-Islam Gaddafi, a son of Libyan leader Muammar Gaddafi, has promised a programme of reforms but also warned of “civil war” after bloody protests against his father’s 42-year rule reached the capital, Tripoli.

Speaking on state television in the early hours of Monday morning, Saif Gaddafi blamed thugs, inmates, foreigners and Islamists for the unrest that has spread across the country since February 14.

He promised a conference on constitutional reforms within two days and said Libyans should “forget oil and petrol” and prepare themselves for occupation by “the West” if they failed to agree.

The younger Gaddafi contrasted the situation in Libya with revolts earlier this year in Egypt and Tunisia, where long time rulers were forced to step down or flee in the face of mass popular discontent.

Protesters in Libya have similarly called for Muammar Gaddafi’s ousting, but his son drew contrasts between neighbouring countries and Libya, which he said was more tribal and divided.

“Libya is different, if there is disturbance it will split into several states,” he said.

“You can say we want democracy and rights, we can talk about it, we should have talked about it before. It’s this or war. Instead of crying over 200 deaths, we will cry over hundreds of thousands of deaths.

“Brothers, there are $200bn worth of projects at stake now. We will agree to all these issues immediately. We will then be able to keep our country, unlike our neighbours.

“Or else, be ready to start a civil war and chaos and forget oil and petrol.”

Gaddafi said his father remains in the country and is backed by the army, despite reports from several cities that soldiers have refused to take action against protesters and in several cases have joined their ranks or withdrawn.

“We will fight to the last minute, until the last bullet,” Gaddafi said.

Following Saif Gaddafi’s speech, witnesses in Tripoli reported an escalation of violence, as supporters of his father flooded into the city’s central square and confronted anti-government protesters.

Armed men in uniform fired into the crowds, witnesses said, and continuous gunfire could be heard in the background of recorded phone calls from the capital released to journalists by Libyans living abroad.

Saif Gaddafi admitted that some military bases, tanks and weapons had been seized and acknowledged that the army, under stress, opened fire on crowds because it was not used to controlling demonstrations.

Witnesses in Libya have reported that some cities, especially in the east, which is perceived as less loyal to Muammar Gaddafi, have fallen completely into the hands of civilians and protesters.

Though human rights groups have said that hundreds of protesters have died, a toll they still described as “conservative,” Saif Gaddafi said that numbers had been exaggerated.

He said there were 14 dead in Tripoli and 84 in Benghazi, Libya’s second-largest city and the site of some of the bloodiest security crackdowns.

In a new estimate released on Sunday, Human Rights Watch said at least 233 people have died so far.

Doctors and eyewitnesses throughout Libya have offered widely varying death toll but have reported many hundreds of injured, even in Benghazi alone.

“It sounded like a desperate speech by a desperate son of a dictator who’s trying to use blackmail on the Libyan people by threatening that he could turn the country into a bloodbath,” Bishara said.

“That is very dangerous coming from someone who doesn’t even hold an official role in Libya – so in so many ways, this could be the beginning of a nightmare scenario for Libya if a despotic leader puts his son on air in order to warn his people of a bloodbath if they don’t listen to the orders or the dictates of a dictators.”

Saif Gaddafi offered to put forward reforms within two days, saying Libya faced a “historic moment” and could choose between reform or something “worse than Yugoslavia”.

He said the regime was willing to remove some restrictions and begin discussions for a constitution – something he said “the leader Gaddafi” desired.

He also offered to change a number of laws, including those covering the media and the penal code.

“It’s also fascinating how he threatened the West with chaos in Libya and then threatened Libyans with Western intervention, because, as he put it, that would turn Libya into a decentralised country allowing various Islamist groups to take over, which the West would not allow,” Bishara said.

Saif Gaddafi said the General People’s Congress, Libya’s equivalent of a parliament, would convene on Monday to discuss a “clear” reform agenda, while the government would also raise wages.

Speaking to Al Jazeera, Najla Abdurrahman, a Libyan dissident, said Gaddafi’s speech was an attempt to “play up” Libyans’ fears.

“I don’t think anyone in Libya who isn’t close to the Gaddafi regime would buy anything he said,” she said.

“And even if there is any truth to what he said, I don’t think it’s any better than what the people of Libya have already been living with for the past 40 years.”

On Sunday, before Saif Gaddafi’s speech, thousands of protesters rallied in Tripoli and clashed with Gaddafi supporters.

Witnesses said earlier that protesters had begun to mass in many smaller cities in Libya’s west and along its Nafusa mountain chain and had plans to march on the capital.

“We are sending our message to Gaddafi via Al Jazeera, telling him we are determined to topple him from power because of the reign of terror we have experienced for more than 40 years,” said Nassen Sefao, speaking from Yafran, around 160 km southwest of Tripoli. “We will never concede to humiliation again.”

Gunfire rang out in the night and police used tear gas to disperse demonstrators in the capital, some of whom threw stones at Gaddafi posters.

“We are in Tripoli, there are chants [directed at Gaddafi]: ‘Where are you? Where are you? Come out if you’re a man,” a protester told Al Jazeera on the phone.

Another resident told the Reuters news agency that the lights had gone out inside their house.

“There are gunshots in the street,” the resident said by phone. “That’s what I hear, gunshots and people. I can’t go outside.”

An expatriate worker living in the Libyan capital told Reuters: “Some anti-government demonstrators are gathering in the residential complexes. The police are dispersing them. I can also see burning cars.”

There were also reports of protesters heading to Gaddafi’s compound in the city of Al-Zawia near Tripoli, with the intention of burning the building down.

Most of the protests and violence have occurred in Benghazi, the cradle of the uprising and a region where Gaddafi’s grip has always been weaker than elsewhere in the oil-rich desert nation.

Habib al-Obaidi, a surgeon at the Al-Jalaa hospital there, said the bodies of 50 people, mostly shot dead, were brought in on Sunday afternoon. Two hundred wounded had arrived, he said.

“One of the victims was obliterated after being hit by an RPG (rocket propelled grenade) to the abdomen,” he said.

Members of an army unit known as the “Thunderbolt” squad had brought wounded comrades to the hospital, he said.

The soldiers said they had defected to the cause of the protesters and had fought and defeated Gaddafi’s elite guards.

“They are now saying that they have overpowered the Praetorian Guard and that they have joined the people’s revolt,” another man at the hospital, lawyer Mohamed al-Mana, told the Reuters news agency by telephone.

In another sign of popular resentment toward Gaddafi, the head of the Al-Zuwayya tribe in eastern Libya threatened to cut off oil exports unless authorities stop what he called the “oppression of protesters”.

The Warfala tribe, one of Libya’s biggest, has also reportedly joined the anti-Gaddafi protests.

Libya has become a key oil provider to Europe in recent years, and EU countries buy approximately 75 per cent of the country’s oil.

Sheikh Faraj al Zuway, the head of the Zuwayya tribe, told Al Jazeera that his people would stop oil exports within 24 hours if the government-sponsored violence did not stop.

The tribe’s population is primarily centred south of Benghazi.

Akram Al-Warfalli, a leading figure in the Warfala tribe south of Tripoli, told Al Jazeera that Gaddafi was “no longer a brother” and must leave the country.

Protests have also reportedly broken out in other cities, including Bayda, Derna, Tobruk and Misrata. Anti-Gaddafi graffiti adorns the walls of several cities.

Anti-government protesters in the eastern Libyan city of Benghazi have reportedly seized army vehicles and weapons amid worsening turmoil in the African nation.

Mohamed, a doctor from Al Jalaa hospital in Benghazi, told Al Jazeera that members of the military had sided with the protesters.

“We are still receiving serious injuries; I can confirm 13 deaths in our hospital. However, the good news is that people are cheering and celebrating outside after receiving news that the army is siding with the people,” he said.

“But there is still a brigade that is against the demonstrators. For the past three days demonstrators have been shot at by this brigade, called Al-Sibyl brigade.”

Sadiq al Ghiryani, a Libyan religious leader, told Al Jazeera a “massacre” was under way in the city and troops firing shots were mostly mercenaries. Kamal Hudethifi, a judge, described the killings as “ethnic cleansing”.

Moftah, a Benghazi resident, who requested Al Jazeera use only his first name, said the city had become a “war zone” in recent days. Residents have barricaded the streets with overturned trash cans and debris, and security forces have largely confined themselves to two compounds, though snipers continue to target protesters, he said.

The forces who remain are “thugs” loyal to Gaddafi, Moftah said, and they are firing high-calibre ammunition at protesters.

The eyewitness report came a day after security forces opened fire at a funeral in the eastern coastal city on Saturday, killing at least 15 people and injuring scores more.

A group of six alleged mercenaries – reportedly brought in from Tunisia and other African nations to bolster pro-Gaddafi forces – were captured and arrested by demonstrators in the city of Shahat.

Against this backdrop of violence, opposition groups said some 50 Libyan Muslim leaders have urged security forces to stop killing civilians.

“This is an urgent appeal from religious scholars, intellectuals, and clan elders from Tripoli, Bani Walid, Zintan, Jadu, Msalata, Misrata, Zawiah, and other towns and villages of the western area,” the appeal, signed by the group of leaders, stated.

“We appeal to every Muslim, within the regime or assisting it in any way, to recognise that the killing of innocent human beings is forbidden by our Creator and by His beloved prophet of compassion, peace be upon him … Do not kill your brothers and sisters. Stop the massacre now!”

Around the world, people have been gathering in solidarity with the protesters at Libyan consulates and at the White House in Washington, the US capital.

Libya’s government has responded to the international criticism by threatening retaliation against the European Union.  It said on Sunday that it would stop co-operating with efforts to try and stop illegal migrants heading to Europe.