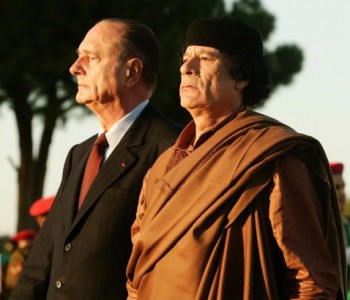 Hundreds have been killed in Libya since protests broke out across the North African nation six days ago, according to rights watchdogs and eyewitnesses across the country.

Residents told Al Jazeera that at least 200 people had died in the eastern city of Benghazi alone, while the New York-based Human Rights Watch on Sunday put the countrywide death toll at 104.  The rights group said the figure was “conservative”.

Protests have also reportedly broken out in other cities, including Bayda, Derna, Tobruk and Misrata.

In the capital, Tripoli, supporters of the government took to the streets in large numbers, and security forces prevented large demonstrations against Muammar Gaddafi’s 42-year reign.

Moftah, a resident of Benghazi – Libya’s second largest city – who requested Al Jazeera use only his first name, said the city had become a “war zone” in recent days.

Residents have barricaded the streets with overturned trash cans and debris, and security forces have largely confined themselves to two compounds, though snipers continue to target protesters, he said.

The forces who remain are “thugs” loyal to Gaddafi, Moftah said, and they are firing high-calibre ammunition at protesters.

Mariam, a doctor speaking from a hospital in Benghazi, said the military had shot at protesters with live ammunition and that even the hospital was not safe. An eight-year-old boy who had been shot in the head was among the dead, she said.

Security forces reportedly opened fire at a funeral in the eastern, coastal city on Saturday, killing at least 15 people and injuring scores more.

The funeral was to honour protesters killed by security forces during the ongoing protests, which began on Monday after the arrest of a prominent lawyer, and have continued to call for Gaddafi’s downfall.

Another doctor from Benghazi’s al-Jalah hospital said staff there had received 15 bodies and were treating numerous people following the shootings at the funeral. The hospital counted 44 deaths in three days and was struggling to treat the wounded, he said.

“This is not a well-equipped hospital and these injuries come in waves,” he said. “All are very serious injuries, involving the head, the chest and the abdomen. They are bullet injuries from high-velocity rifles.”

He said the wounded and dead were all civilians aged 13 to 35 and that the security forces were operating a shoot-to-kill policy “absolutely”.

Against this backdrop of violence, opposition groups said some 50 Libyan Muslim leaders have urged security forces to stop killing civilians.

“This is an urgent appeal from religious scholars, intellectuals, and clan elders from Tripoli, Bani Walid, Zintan, Jadu, Msalata, Misrata, Zawiah, and other towns and villages of the western area,” the appeal, signed by the group of leaders, stated.

“We appeal to every Muslim, within the regime or assisting it in any way, to recognize that the killing of innocent human beings is forbidden by our Creator and by His beloved Prophet of Compassion, Peace Be Upon Him … Do not kill your brothers and sisters. Stop the massacre now!”

The deaths came amid claims that a military brigade in Benghazi had fallen to the people. The doctor in Benghazi told Al Jazeera that protesters stormed the building on Saturday.

Ahmed, a Benghazi businessman who also gave only his first name, said hospitals in the city were overwhelmed with the number of dead and injured and were running out of blood.

“It’s a big, big massacre. We’ve never heard of anything like this before. It’s horrible,” he said.

“The shooting is still taking place right now. We’re about three kilometres away from it, and we saw this morning army troops coming into the city. You can hear the shooting now. They don’t care about us.”

The unrest in Libya has largely been centred in the eastern cities of Benghazi, Bayda and Tobruk. But Al Jazeera has received reports that the protests have also begun to spread to the west of the country.

Witnesses said thousands of people took part in peaceful protests in the western city of Misrata. They were demonstrating against state brutality, rather than calling for a change in government.

Mohamed Abdulmalek, the chairman of Libya Watch – a human rights group that monitors abuse in the country – said the delay of protests in the west was due to the heavy presence of security forces there, “not because the people did not want to go out”.

“The security presence in Tripoli, for example, was so intense that people gathered individually in the beginning,” Abdulmalek said from the United Kingdom. “The Libyan regime anticipated this, so the squares in Tripoli were occupied by security forces and therefore people were not allowed to gather.”

“But eventually, the pressure on the capital started from outside Tripoli and now you see the people revolting. We have no doubt that the east and the west will unite.”

Verifying news from Libya has been difficult since the protests began, because of restrictions on journalists entering the country, as well as internet and mobile phone blackouts imposed by the government.

The Libyan government has blocked Al Jazeera’s TV signal in the country – and residents have also reported that the network’s website is inaccessible from there.

In addition to TV signal jamming, internet service has been cut, said a US company that monitors web traffic.

Massachusetts-based Arbor Networks said data collected from 30 internet service providers worldwide showed that online traffic in and out of Libya was disconnected abruptly at 2:15am local time on Saturday. The data also showed two partial service interruptions earlier in the day.

As of Sunday, it was still possible to reach Libyans by phone, and some in Tripoli had internet access.

Protests in the country began on February 14, and three days later, tens of thousands of anti-government demonstrators seeking to oust Gaddafi took to the streets in what organisers called a “day of rage” – modelled after similar protests in Tunisia and Egypt that toppled long time leaders there.

While Libya has the largest oil reserves in Africa, two-thirds of the 6.5million population live on less than $2 a day.