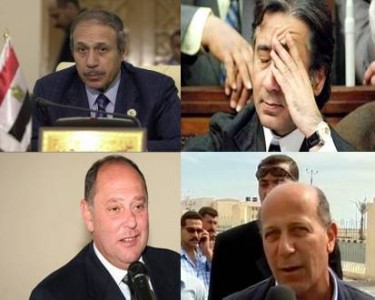 As part of a massive crackdown on the symbols of deposed president Hosni Mubarak’s regime, Egyptian authorities have arrested three former ministers and a top ruling party official for corruption.

They were detained on charges of diverting public funds.

Once feared interior minister Habib el-Adli was also arrested on charges of money-laundering.

The arrests came about a week after longtime president Hosni Mubarak was forced out from office after 18 days of mass protests.

The four are among a number of former ministers and officials who have had their bank accounts frozen and been barred from leaving the country, including ex-prime minister Ahmed Nazif.

Britain, France, Germany and the United States said Egypt has called on them to freeze the accounts of ex-officials.

The move is seen as part of attempts by the new military rulers to win the confidence of the demonstrators who cited corruption as one of the prime reasons for their uprising.

Once widely feared, el-Adli was blamed for the brutality displayed by police in quelling the anti-Mubarak protests, during which more than 360 were killed.

Ezz is popularly believed to have been responsible for architecting much of the fraud that marred the 2010 parliamentary elections when Mubarak’s ruling party won about 90 percent of the 518 seats.

In another effort to further communicate with the youth-led protesters, Egypt’s military rulers have launched their own Facebook page.

The Supreme Council of the Armed Forces dedicated the page “to the sons and youth of Egypt who ignited the January 25 revolution and to its martyrs,” Agance France-Presse (AFP) reported.

It said the page was established by the head of the council, Field Marshal Hussein Tantawi, who felt that “fruitful cooperation in the coming period with the honorable sons of Egypt would lead to stability and security.”

The military council emphasized it did not have any “political aspirations” and was still committed to a democratic transition to civilian rule.

The page quickly attracted hundreds of youths, with some comments welcoming “the heroes of Egypt” to the popular networking site and others saying it should be a forum for dialogue between the people and the military.

The military remains extremely popular after it allowed the nationwide demonstrations to take place and expressed respect for protesters’ demands, unlike the police which remain widely despised as cruel enforcers of the old regime.

In the first comment, Walid Shahin suggested steps be taken to revive the vital tourism sector following the uprising, which saw thousands of foreigners flee the country and emptied out its ancient sites, including the Pyramids.

“We want an open page… so that you can feel the pulse of the street without a mediator,” read another comment by Ahmed Abdullah.