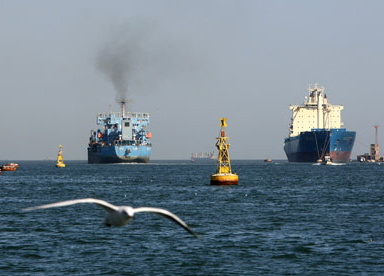 “No Iranian warships ships crossed the Suez Canal today,” Ahmed El Manakhly, a member of the canal’s board who is responsible for shipping movement, told Reuters.

“The Suez Canal does not have any Iranian warship on its waiting list for tomorrow Friday.”

Another canal source said 26 ships, including one French warship, had entered in the morning northbound convoy.

But the convoy did not include Iranian warships, added the source.

Two Iranian warships were planned to cross the international waterway on way to Syria.

Israel’s Yedioth Ahronoth newspaper described the two Iranian ships as an MK-5 frigate and a supply vessel, which would not present a significant danger to the Jewish state.

Syria is one of Israel’s neighboring adversaries. It has an alliance with Iran which has deepened along with Tehran’s isolation from the West over its disputed nuclear program.

Iran’s semi-official Fars news agency reported on Jan. 26 that Iranian navy cadets were going on a year-long training mission into the Red Sea and through Suez to the Mediterranean.

The Suez Canal is a vital commercial and strategic waterway between Europe and the Middle East and Asia.

It is also a major source of revenues for the Egyptian government.

The cancellation has removed a new policy headache for Egypt’s new military rulers, who took control after President Hosni Mubarak was forced to step down after popular protests.

Manakhly said warships of any country needed approval to pass from Egypt’s defense and foreign ministries.

Israeli Foreign Minister Avigdor Lieberman had said two Iranian warships planned to sail through the canal en route to Syria overnight on Wednesday, describing it as a “provocation”.

He had said the ships were expected to pass through the Suez Canal overnight on Wednesday.

Israel’s state-funded Channel One television said Lieberman, a vociferously far-right partner in the conservative coalition, had spoken out of turn as the Defense Ministry “had preferred to ignore” the ships’ approach.

Defense Minister Ehud Barak said Israel was tracking them and had alerted “friendly nations in the region” accordingly.

If the ships had crossed, it would have been the first time since Iran’s 1979 revolution that Iranian warships had passed through the canal.

Iran’s revolution poisoned ties with Egypt, which signed a peace treaty with Israel that year.