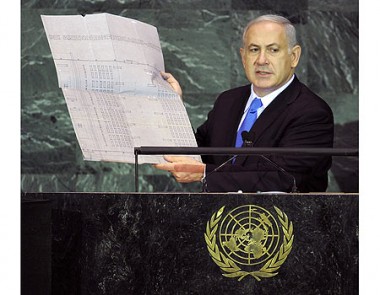 The U.N. Security Council is poised to vote this week on a new resolution condemning Israeli expansion into the Occupied Palestinian Territories and calling for an immediate freeze on settlements in the West Bank and East Jerusalem, but the United States has already declared its intention to again deploy its veto power.

Backed by 122 nations, the proposed resolution comes in the wake of the exposure of what is being referred to in the media as the ‘Palestine Papers’, thousands of leaked documents laying bare the Palestinian Authority’s compliant stance towards Israel’s aggressive annexation of its meagre remaining territory.

Speaking to the House of Representatives’ Foreign Affairs Committee on Feb. 10, Deputy Secretary of State James Steinberg said, “We have made very clear that we do not think the Security Council is the right place to engage on these issues… And we will continue to employ the tools that we have to make sure that continues to not happen.”

Diana Buttu, a policy advisor to Al-Shabaka, the Palestinian Policy Network, and a former advisor to Palestinian negotiators, told a teleconference organised by the Institute for Middle East Understanding (IMEU) Wednesday that negotiations between the PA and the Israeli government have never been based on the precedent of international law, but rather on third parties pressuring Palestine to repeatedly make concessions.

These “lopsided negotiations” are further warped by the U.S.’s history of leveraging its veto power in the Security Council to block any resolution that comes close to granting some justice to the Palestinians.

The approaching Security Council vote throws harsh light on the U.N. itself as a leader in global governance.

“Critics have long seen the U.N. as a gaggle of elites from all over the world gathered to accredit post- colonial countries by incorporating them into global liberal democracy and this partially explains the endurance of the obviously illegal and cruel occupation and annexation of Palestinian land over generations by Israel,” Sayres Rudy, a professor of Politics at Hampshire College, told IPS.

“Year after year, for decades, proper resolutions are drafted re- condemning the occupation and insisting on the various provisions of international law for return of land and peoples seized in war, and nothing is done,” Rudy said.

“This is partly because the atavistic structure of the U.N. allows individual countries like the U.S. to veto majority decisions,” he added.

“The U.N.’s weakness with respect to Palestine also may involve the very problem of universal precedent: when an international body wishes to ban certain crimes – such as the many in the Israeli occupation – it is less likely to be accepted because of its residual effects on the more powerful countries,” he said.

“If, in this case, Israel’s actions are atrocious and illegal, will the U.S. eventually have to answer fully to its own native populations, also ethnically cleansed, contained on reservations, and reduced to destitution?”

“Seventy per cent of U.S. vetoes have been used on Israel’s behalf,” Butto said. “Rather than bolstering those people who are committed to negotiations, the U.S. has systematically undermined them.”

She added that the Palestinians need to start adopting isolationist strategies towards Israel.

“It does not make sense for the Palestinians to play into the image of negotiations, of the two sides meeting, shaking hands, kissing and hugging, if they want to get people to understand that what’s really happening is colonisation, ethnic cleansing and the destruction of Palestinian lives and their environment,” Butto said.

“But for a century and a half it has also required the creation of elite Palestinian collaborators with the dispossession of the Palestinian people; from the Oslo period forward the Palestinian Authority (PA) has eagerly cooperated with the Israeli government in enforcing settlement expansion, suffocating Palestinian social movements, and creating a crude authoritarian patronage system with daily decreasing legitimacy,” Rudy concluded.

Framed against the upheaval that successfully uprooted a 30- year-long dictatorship in Egypt last week, and amidst ongoing protests across North Africa and the Middle East, the U.S.’s decision to put its moral authority on the line for Israel yet again, while not unexpected, is drawing unprecedented criticism in light of the climate of the “people power” that is sweeping the world.

Surrounded by a host of increasingly hostile neighbours, Israel is now more vulnerable than ever before, having lost the bulwark of Turkey last year and more recently its right- hand man, Hosni Mubarak, in Cairo.

Without the lavish aid package it receives from the U.S. – three billion dollars annually – Israel could not hope to hold its head above the tempestuous waters in which it navigates.

“It’s been the clearly stated policy of the Obama administration, since coming to office in January 2009, that the Israelis should stop building settlements and sit down with the Palestinians to negotiate a two-state settlement,” Dr. John Mearsheimer, co-director of the Programme on International Security Policy at the University of Chicago, told a press briefing Wednesday.

“The only reason it won’t happen is because the Israel lobby will insist that Obama veto the resolution. This brings up the question of where we are headed,” he said.

“A conversation about the two-state solution is meaningless, there’s not going to be one,” Mearsheimer noted. “The Palestinians are never going to their own state. Instead there is going to be a Greater Israel.”

This Greater Israel, which will consume both Gaza and the West Bank and therefore include all the Palestinians therein, presents a unique opportunity for democracy, though it is still a far cry away from justice in Palestine.

“Whether Greater Israel comes in 20 years or 30, it is going to be dominated by the Palestinians and not by the Jews because Palestinian citizens will largely outnumber Jewish ones,” Mearsheimer told the press. “In a democratic Greater Israel, Palestinians will have the power of the majority.”

“By allowing this to happen, the U.S. is basically helping the state of Israel to commit national suicide,” he concluded.

Harking back to the words of Prime Minister Ehud Olmert, Mearsheimer argued that unless it achieved a two-state solution, Israel was fated to become the apartheid South Africa of the 21st century.

“This has already happened,” he said, “and it’s about time Palestinians shut down the PA, take advantage of what’s going on in the Arab world and capitalise on the fact that democracy is a cherished value, particularly in the United States.”

“After Tunisia and Egypt, it’s the perfect time to argue against apartheid and in favour of democracy,” Mearsheimer concluded.