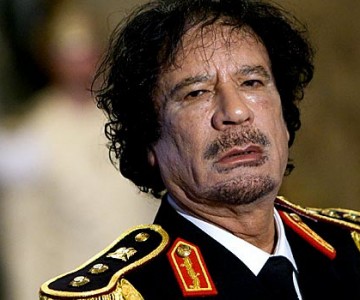 Hundreds of protesters have reportedly torched Libyan police outposts in the eastern city of Beyida, while chanting: “People want the end of the regime.”

“All the people of Beyida are out on the streets,” said 25-year-old Rabie al-Messrati, who said he had been arrested after spreading a call for protests on Facebook.

Online calls of dissent have been growing rapidly over the past few days, with Facebook groups calling for “Uprising on February 17” doubling in popularity between Monday and Wednesday.

In the southern city of Zentan, 120km south of Tripoli, hundreds of people marched through the streets and set fire to security headquarters and a police station, then set up tents in the heart of the town, as a wave of unrest spread south and westwards across the country.

Demonstrators gathered in the early hours of Wednesday morning in front of Benghazi’s police headquarters and chanted slogans against the “corrupt rulers of the country”, Al Jazeera’s sources said.

Chants including “No God but Allah, Muammar is the enemy of Allah,” can be heard on videos of demonstrations uploaded to YouTube. Independent confirmation was not possible as Colonel Muammar Gaddafi’s administration keeps tight control over the movements of media personnel.

Police reportedly fired tear gas and violently dispersed protesters, arresting 20. Families of those arrested are planning to gather outside the city’s security directorate to demand their release, our source tells us.

Al Jazeera is understood to have been taken taken off the state-owned cable TV network, but is still reportedly available on satellite networks.

Meanwhile, protesters have taken to Twitter to spread details on how to bypass internet clampdowns. Social media sites were reportedly blocked for several hours through the afternoon, but access was restored in the evening.

The crowds of demonstrators included some armed with rocks and petrol bombs, reported the online edition of Libya’s privately owned Quryna newspaper, which is based in Benghazi – some 1,000km east of the oil-exporting country’s capital.

At least 38 people were injured in the clashes, including ten security officials.

Benghazi’s residents have a history of distrust of Gaddafi’s rule, and many of the people jailed for membership of banned political groups are from the city.

On Wednesday evening, 110 members of the armed – and outlawed – Libyan Islamic Fighting Group were due to be released from Abu Salim prison later on Wednesday, in a suspected move to quell tension in the city, believed to have been orchestrated by Gaddaffi’s son, Seif al-Islam Gaddaffi.

There are just 30 members of the group remaining in prison.

The state has also offered to double the salaries of government workers, and co-ordinated a series of twelve pro-Gaddaffi rallies in cities across the country.

Al-Mesmari was arrested hours after the interview.

Anti-government protesters have also called on citizens to observe Thursday as a “Day of Rage”. They are hoping to emulate recent popular uprisings in Egypt and Tunisia to end Colonel Muammar Gaddafi’s 41-year-old rule.

The rare protests reportedly began after relatives of those killed in a prison massacre about 15 years ago took to streets. They were joined by scores of other supporters.

Benghazi residents have a history of distrust of Gaddafi

The relatives were said to have been angered by the detention of Fathi Terbil, human rights lawyer and official spokesman of the victims’ families, who was arrested by the Libyan security forces, for no apparent reason.

However, Terbil was later released, according to reports.

Twelve-hundred prisoners were killed in the Abu Slim prison massacre on June 29, 1996, after they had objected to their inhumane conditions inside the prison.

Those killed were buried in the prison’s courtyard and in mass graves in Tripoli. The families of the victims have been demanding that the culprits be punished.

Mohammed Maree, an Egyptian blogger, said “Gaddafi’s regime has not listened to such pleas and continues to treat the Libyan people with lead and fire.”

“This is why we announce our solidarity with the Libyan people and the families of the martyrs until the criminals are punished, starting with Muammer and his family.”

Libyan state television reported that rallies were taking place all over the country early this morning “in support of the rule of the people by the people”.

A group of prominent Libyans and members of human rights organisations have also demanded the resignation of Gaddafi.

They said that the Libyans have the right to express themselves through peaceful demonstrations without any threat of harassment from the regime.

The demands came in a statement signed by 213 personalities from different segments of the Libyan society, including political activists, lawyers, students, and government officials.

The prisoners to be freed on Wednesday, are the last members of the group still being held and will be set free from Tripoli’s Abu Salim jail, Mohamed Ternish, chairman of the Libya Human Rights Association said.

Hundreds of alleged members of the group have been freed from jail after it renounced violence last year.