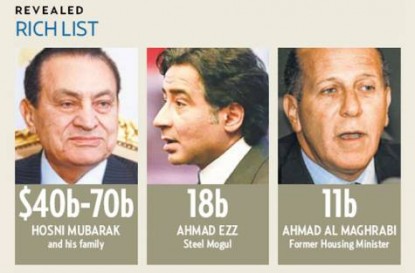 Corruption, tax evasion and crime have cost Egypt approximately $6 billion (Dh22.03 billion) annually and a total of $57.2 billion from 2000 to 2008 in illicit financial activities and government corruption, according to a report by Washington-based Global Financial Integrity (GFI).

Deposed President Hosni Mubarak and his family have a personal fortune worth $40 billion to $70 billion accumulated during his 30 years in power, according to recent estimates.

Others place the Mubarak family fortune at $1 billion to $5 billion stashed in foreign banks, an anonymous US intelligence official told the news channel ABC.

Switzerland froze Mubarak’s assets after he stepped down from power in the wake of 18 days of protests, according to a Swiss Foreign Ministry spokesperson cited by Egyptian newspaper Al Isboa. The UK government is now under pressure to trace and freeze Mubarak’s assets in the UK. However, it can do so only if the Egyptian authorities request it or if Mubarak is blacklisted by European or UN officials, or if not freezing the money presents a direct threat to the UK’s interests, according to AP.

The fortune of steel mogul Ahmad Ezz, considered a symbol of corruption in Egypt, is estimated at 18 billion Egyptian pounds. Former Housing Minister Ahmad Al Maghrabi is credited with 11 billion Egyptian pounds and former Tourism Minister Zahir Ghoranah is alleged to be worth 13 billion pounds, according to judiciary sources that investigated the former ministers and businessmen, according to Egyptian media. 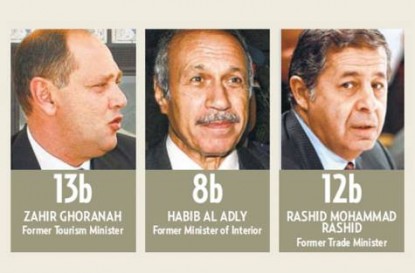 The earnings of 20 to 40 per cent of Egyptians who live under the poverty line pale in comparison to the numbers. They would also be enough to cover Egypt’s foreign debt of $32 billion, Egyptian economists say.

Egypt’s public prosecution is investigating some of these former ministers and businessmen for looting public wealth; they are forbidden from travelling outside Egypt and their accounts have been frozen.

Tracking the allegedly illicit wealth of the former government officials could lead investigators to Switzerland, France, the UK, the UAE and other domiciles.

There is a “lot of money floating around”, mainly in the US, UK and UAE, belonging to the Egyptian and Tunisian former ruling families in the form of investments and property, Theodore Karasik, director of research and development at the Institute for Near East and Gulf Military Analysis in Dubai, told Gulf News.

“It is putting in the spotlight [the places] where ruling families and their associates are taking state monies and enriching themselves. It is not a new phenomenon but is happening in Middle Eastern countries swept through by revolutionary tsunamis,” he said.

The issue will become “politically sensitive”, he said. “People want to know where their money went.”

The UAE has an international legal framework to freeze assets if necessary, a lawyer said.

It is an incorrect perception that the UAE is a money-laundering hub, said Carlo Fedrigoli, a laywer with DLA Piper, specialising in white-collar crime. The UAE is a member of the UN Convention against Corruption (UNCAC), which obliges it to trace, freeze, recover and return stolen assets and funds, he said.

According to Fedrigoli, the main sources of income for a corrupt political leader are disposal of large state-owned companies, such as transport and tele-coms, public funds from international bodies, and defence deals.

In Tunisia and Egypt, the leadership was “so comfortable for so long” that their fund transferring techniques were “not too sophisticated” and probably included typical offshore transfers, he said.