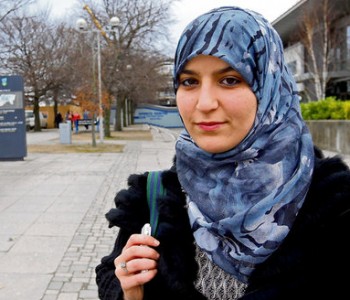 ‘Down a road on an industrial estate in Togher, a suburb two kilometres south of Cork city centre, stands a nondescript former engineering premises whose future will mark a significant chapter in the story of Islam in Ireland. Within a year the hulking concrete building will be transformed into a mosque complex capable of accommodating 1,000 or so worshippers. Design plans show a crescent-topped glass tower overlooking gleaming white arches and domes. The one-acre site will be the second-biggest such complex in the country, after the Islamic Cultural Centre of Ireland (ICCI), in Clonskeagh in Dublin, and the second purpose-built Sunni mosque outside the capital. It is yet another sign of the deep roots Islam has laid in Ireland.

“This is a very important step for us,” says Salim al-Faituri, the mosque’s Libyan-born imam. “We have been moving from one rented premises to another for years. Finally we will have a place of our own.” The new mosque, funded by donations including one €800,000 gift from a Qatari benefactor, will cater for 6,000 Muslims in Cork and several thousand more living in its hinterland.

“This is the second-biggest Muslim community outside Dublin,” says Ahmed H Zahran, an Egyptian academic at University College Cork who sits on the mosque committee. “And it’s growing.”

Ireland’s Muslim population, when compared with other European countries’, is relatively young, but it is changing fast. Almost 10 times more Muslims live in Ireland today than lived here 20 years ago. The 2006 census put the figure at just under 33,000, but most observers agree the true figure is well in excess of 40,000. The number of Muslims here increased by almost 70 per cent between 2002 and 2006, making Islam one of the fastest-growing religions in the country.

Ireland’s Muslim community is also becoming more diverse – so much so that it is truer to speak of a constellation of communities. In the past Muslims from the Middle East and North Africa tended to predominate. Most of this earlier generation came for educational or professional reasons and decided to stay, often marrying Irish citizens. From the early 1990s, however, the population swelled to include more Muslims from south and Southeast Asia, sub-Saharan Africa and the Balkans. Many of the new arrivals were young economic migrants; others were asylum seekers. (Muslims from Nigeria, Libya, Iraq, Somalia, Algeria and elsewhere have sought asylum in Ireland.) Irish converts make up a small percentage, with some estimates putting the number in the hundreds. The vast majority of Muslims in Ireland are Sunni, but there is also a substantial Shia population in Dublin.

“This is probably one of the most diverse Muslim populations in Europe,” says Dr Oliver Scharbrodt, who is leading a pioneering three-year research project on Islam in Ireland at UCC. “In other European countries you have a particular ethnic group or nationality being dominant because of historical or colonial links, but that is not the case in Ireland. One could say that Ireland constitutes a microcosm of the global Ummah [community of believers], with all the different nationalities, trends and movements present and visible in a fairly small geographic and communal space.”

Muslims here cherish that diversity, but there are increasing signs that the growing number of nationalities and ethnicities, as well as doctrinal and political cleavages, brings its own challenges, not least the vexed question of who, if anyone, speaks for Islam in Ireland.

Most Muslims will argue that, given the traditional lack of anything resembling a church-like structure or hierarchy in Islam, it is impossible for any individual or organisation to claim to represent Muslims living here.

But there is one institution – the Islamic Cultural Centre of Ireland (ICCI) – that because of its size and financial resources, plus its long-standing relationship with the Government, towers over the rest. According to many disgruntled Muslims interviewed for this article, the centre jealously guards its self-appointed position as the voice of Islam in Ireland. Superficially, the ICCI is the most visible face of the faith, from its sprawling mosque complex in south Dublin, which hosts school tours several times a week, to the frequency with which its representatives participate in public debate.

When official Ireland wants to reach out to Muslims it will most likely turn to the centre in Clonskeagh. President Mary McAleese made the most recent of several visits in December. The centre has welcomed Taoiseach Brian Cowen and his predecessor Bertie Ahern, plus a parade of ministers. (Dick Roche visited during the Israeli military offensive on Gaza in early 2009 to explain Ireland’s position on the conflict.) Such high-profile visitors are usually hosted by Shaheen Ahmed, a Pakistan-born businessman and friend of Ahern’s who ran unsuccessfully as a Fianna Fáil candidate in the 2009 local elections.

The Islamic Cultural Centre of Ireland’s four-acre complex, which includes a school, was built in 1996 with funding from the al-Maktoum Foundation, headed by Sheikh Hamdan bin Rashid al-Maktoum, deputy ruler of Dubai and finance minister of the United Arab Emirates. The al-Maktoum family has extensive business interests in Ireland through its involvement in the bloodstock industry. The centre has about 20 members of staff, mostly of Arab origin, who are full-time employees of the al-Maktoum Foundation. Its chief executive is the Iraqi-born Dr Nooh al-Kaddo, who moved from Britain to Dublin in 1997 to run the complex.

Many Muslims in Ireland speak of the ICCI as the “Ikhwani” mosque, an Arabic-language reference to the Muslim Brotherhood, which, since its foundation in Egypt, in 1928, has grown to become the world’s most influential transnational Islamist movement.

As Scharbrodt notes in a forthcoming volume on Ireland’s new religious movements, the Islamic Cultural Centre of Ireland is “part of a network of European organisations and groups with close links to the Muslim Brotherhood and its various European branches – a connection that has caused some controversy”. He stresses, however, that these affiliations are “very often loose and informal” and include, apart from personal connections of staff at the centre, institutional ties with the Brussels-based Federation of Islamic Organisations in Europe, an umbrella organisation of various branches and affiliates of the Muslim Brotherhood. The Muslim Association of Ireland, which is based at a mosque in Tallaght, also comes under the federation’s umbrella. Senior figures at some other mosques also have links with the Muslim Brotherhood, mostly dating back to political involvement in their countries of origin. “The Muslim Brotherhood influence constitutes one of the strongest elements of Islam in Ireland,” says one well-placed source.

The Imam at the Islamic Cultural Centre of Ireland, Egyptian-born Hussein Halawa, is the secretary of an offshoot of the federation called the European Council for Fatwa and Research, a group of scholars that issues religious opinions on practical matters specific to Muslims in Europe. Because of Halawa’s role, the council has its headquarters at the Clonskeagh centre. “With the [ICCI] hosting the secretariat of this leading body of Islamic jurisprudence, Ireland has become the centre of one of the most influential ideological and intellectual trends of the contemporary Muslim world,” says Scharbrodt.

The European council was established by Yusuf al-Qaradawi, an Egyptian-born cleric based in Qatar who is considered a spiritual guide for the Muslim Brotherhood. Qaradawi, who presents a popular TV programme on Al Jazeera’s Arabic channel, has drawn controversy in the US and Europe for his pronouncements, including the sanctioning of Palestinian suicide bombing. He has visited Ireland several times, and is expected to travel to Dublin later this year.

In a 2010 report the Pew Forum on Religion and Public Life found that about 400 mosques across Europe are said to be at least indirectly associated with the Muslim Brotherhood. It noted that European organisations with roots in the brotherhood have begun working more closely with governments in Europe, as has happened in Ireland. “In part because of their professional staffs and middle-class leadership, groups linked to the Muslim Brotherhood are sometimes seen by government officials and other influential members of society as being proxies for the Muslim community as a whole,” the report said.

However, as Scharbrodt notes, while organisations such as the ICCI and the Irish Council of Imams – which is chaired by the ICCI’s Halawa – have emerged as the public face of Islam in Ireland, the majority of Muslims living here have no official affiliation with them. “Hence,” he says, “the question of how representative these organisations are needs to be raised.”

In recent years a number of individuals and groups have challenged the role of the Islamic Cultural Centre of Ireland and other long-established organisations, such as the Islamic Foundation of Ireland, which is based at the South Circular Road mosque in Dublin.

In 2008 an Irish convert from Gorey, Co Wexford, named Liam (or Mujahid) Egan, set up the Muslim Public Affairs Committee. This was little more than a website on which he and his associates excoriated the ICCI and other bodies while propagating the austere Salafist strain of Islam that Egan had imbibed while living for more than a decade in Saudi Arabia and Yemen. Egan, whose daughter’s request to wear the hijab at school prompted the principal to call for official guidelines on wearing headscarves in state schools, accused Ireland on Al Jazeera of “repressing Muslim rights”. The 2008 TV report, which featured no representative from any Irish mosque, led the ICCI to complain to the Qatar-based channel.

Egan’s website disappeared last year, shortly before he left Ireland. “I didn’t like the direction it was going in due to some contributors,” he said. “It was becoming very anti-Irish and counterproductive. It needed to be reined in.”

Another organisation, which bills itself as a think tank under the name Glór Moslamach, is made up of at least 10 Muslim doctors working in Ireland. One member, a Pakistani named Qasim Afridi, has written for the Metro Éireann newspaper and frequently contributes to online forums where he takes the Islamic Cultural Centre of Ireland and other organisations to task for not criticising the US military use of Shannon Airport or Ireland’s participation in the Nato-led mission in Afghanistan. In one column last year Afridi challenged what he said was the ICCI’s pro-integration stance. “We won’t integrate . . . Why should we? It’s nothing but assimilation in different clothing,” he wrote.

Others, like Abdelrazak Zeroug of the Arab Community Forum advocacy group, say the ICCI is guilty of acting like a closed shop and complain that other Muslim voices have been marginalised. “Many organisations try to have an input or try to give suggestions for the community, but they find all the doors are shut and no one is listening to them. There is a sense within the community that the ICCI is dominating everything and isolating everybody else.”

Nooh al-Kaddo of the ICCI disputes this. “We have never sought to present ourselves as speaking for Muslims in Ireland,” he says. “This is a misperception.”

The opening of a Saudi embassy in Dublin in 2009 has added to the dynamics shaping the Muslim experience in Ireland. Embassy officials told Muslims living here that they plan to open a school and a mosque in Dublin. “If that happens it would be a challenge to the status quo,” says Umar Qadri, imam at the al-Mustafa Islamic Centre, in Blanchardstown. “It would have a very big impact, as we have seen in other countries.”

In the meantime, Scharbrodt says, the Government should engage more with the diversity of Ireland’s Muslims, particularly as the numbers grow and second-generation Muslims come of age. “Ideally it should try to relate to and establish links with as many mosque groups and organisations as possible. That requires a high investment of time and resources, because it’s obviously easier to just talk to one mosque and one organisation than to make efforts to reach out to the actual diversity within the community.