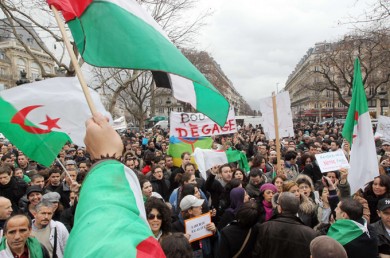 The Algerian government has said it will end its 19-year-old state of emergency “within days”.

Mourad Medelci, the foreign minister, made the announcement on Monday, echoing a similar promise made by Abdelaziz Bouteflika, the president, earlier this month.

“In the coming days, we will talk about it as if it was a thing of the past,” Medelci told French media.

A state of emergency has been in place in Algeria since 1992 and the government has come under pressure to remove the laws following popular uprisings in Egypt and Tunisia.

The decision also comes after demonstrations across the country, calling for a change of government.

On Sunday, hundreds of stone-throwing demonstrators clashed with police in the eastern city of Annaba. Four police officers were slightly injured during clashes with young protesters outside the local government headquarters.

On Saturday, thousands of protesters defied a police ban and protested in the capital Algiers.

Local media meanwhile reported that Bouteflika is preparing to make wholesale changes in his government line-up, a move which could relieve some of the pressure on his administration.

“What happened in Tunisia and Egypt is not likely to happen here,” Nacer Jabi, an Algerian sociologist, said.

Opposition groups have also announced they will follow up the protests held this weekend by calling a demonstration in Algiers, the capital, every Saturday.

“We will continue to march until the regime steps down. Each Saturday we will maintain the pressure,” Mohsen Belabes, a spokesman for the RCD opposition party which helped organised the demonstrations, said.

Elias Filali, an Algerian blogger and activist, quoted Ali Yahia Abdennour, a senior figure and human right activist, as saying: “We should continue protesting every Saturday in the same square, we will gather momentum as we progress we want our dignity back.

“Yesterday the police has brutally beaten many protesters amongst them a pregnant women, old ladies, a journalist, young men and women, we should carry on protesting until we get our rights.”

The resignation on February 11 of Hosni Mubarak, Egyptian president, and last month’s overthrow of Tunisia’s leader, have led many to ask which country could be next in the Arab world, with its flammable mix of authoritarian rule and popular anger.

Widespread unrest in Algeria could have implications for the world economy because it is a major oil and gas exporter, but many analysts say an Egypt-style revolt is unlikely as the government can use its energy wealth to placate most grievances.

Other countries have also felt the ripples from the revolts in Egypt and Tunisia.

Jordan’s King Abdullah replaced his prime minister after protests, while in Yemen, Ali Abdullah Saleh told opponents he would not seek a new term as president.

The Bahraini government has also made several concessions in recent weeks, including promising higher social spending.

There have also been calls for an anti-government rally in Iran on Monday.