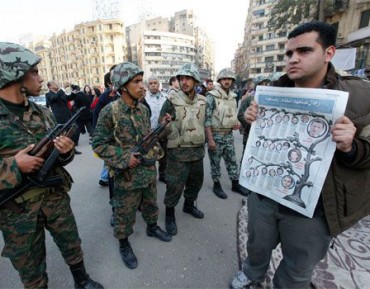 With Hosni Mubarak out as president of Egypt, the staff of the state-owned Al-Gomhuria newspaper have launched a revolt of their own.

At mid-Sunday morning, writers, editors and the general staff of the long-muzzled paper barred their chief editor from coming to his office to work, saying it’s time for a total change in policies.

It’s the second paper along with Al-Ahram that has made a significant shift in the opposite direction.

Both papers have been accused of total bias and selective reporting during the first few days of the struggle against Mubarak.

Many people are also calling for the dissolution of the Egyptian Ministry of Information, which they have accused of policing the media and stifling freedom of expression.

Critics have described the ministry as an “anachronism in this age.”

There is a noticeable change in the local media in general. A major theme projected is a “clean-up” in correlation with the Tahrir Square cleaning up operation by students. It is a symbol of the new attitude the nation has in mind.

Transparency, scrutiny and honesty are surfacing and an analysis of all sectors is being made with the media as the first industry to be dissected.

In another development, the Cairo police have gone on strike to demand better pay, incentives and a provident fund. They also asked for transportation allowance and better treatment from superiors.

A large number of policemen, some coming from other parts of the country, gathered at the roundabout near Al-Jalaa Bridge on Sunday, chanting, “the police and public are one nation.”

They asked how are they supposed to contribute to justice when they are not experiencing it.

The police force has been largely disdained by the public for beating up demonstrators during the early part of the 18-day uprising. Police were later pulled off the streets when they lost control of the demonstrations.

As the protesting policemen gathered near Al-Jalaa Bridge on Sunday, a large number of civilians confronted them, asking them about their dubious role in the uprising and why they were taking bribes and terrorizing the people.

Some policemen replied that they were just taking orders or doing their jobs. One of them pleaded for understanding, saying that he was living on a measly 200 Egyptian pounds (US$35) a month. The policemen also complained that they were not getting medical treatment.

An elderly person told them that he too was living on a measly salary, yet he never took bribe.

In another section of the crowd a woman rebuked a policeman by telling him, “how can you say that the police and public are one?”

Another man interjected by saying that the army, not the police, were the “real protectors of the people.”