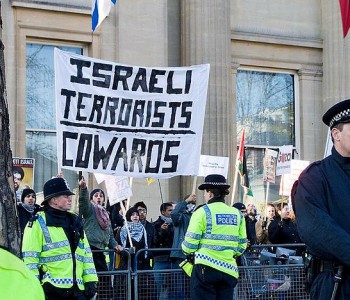 Israeli soldiers and policemen attacked dozens of Palestinian protesters in an act of terrorism in Silwan, south of the Al Aqsa Mosque in occupied East Jerusalem, after the residents conducted Friday prayers at the mosque.

Local sources reported that the police used maps while chasing the youths in the alleys of Al Thoury while one soldier took pictures of a number of protesters in order to identify and arrest them later on.

Also, clashes took place in Ras Al Amoud, east of Silwan, while the army sealed all of its entrances to prevent the resident from reaching the protest tent in Silwan.

The army used a special vehicles to spray the residents with highly condensed coloured and heated water at the western entrance of Silwan.

Silwan, Ras Al Amoud, Al Thoury and several parts of occupied East Jerusalem are witnessing ongoing Israeli violations, including home demolitions and home takeover by Jewish settlers in addition to illegal orders to deport elected official and local residents out of the city.