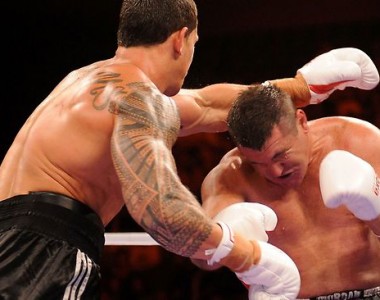 He’s converted from a rugby league teen sensation into an All Black juggernaut, and along the way become a promising heavyweight boxer.

But Sonny Bill Williams has also made a spiritual conversion to Islam.

While rumours of the 25-year-old sporting superstar’s religious beliefs have circulated for some time, the Herald on Sunday can reveal he made the leap of faith two years ago.

He has since become the first Muslim to wear the All Black jersey, and requested halal food during the Northern Hemisphere tour last year.

The Muslim holy month of Ramadan, when followers are forbidden from eating between dawn and sunset, falls in August this year – when the All Blacks play three Tri Nations matches. It is during the final build-up to the Rugby World Cup.

Williams regularly attends Friday prayer sessions at a Christchurch mosque, according to friends.

“He is practising the religion and he is a great role model for the youngsters. We will pray to Allah that he will win the World Cup for us. Everyone talks about it you know. The Muslim community, everyone knows everyone, you know.”

Williams’ manager Khoder Nasser and mentor, league star and boxer Anthony Mundine, are both Muslims, as is his brother Johnny, who lives with him in Christchurch.

YouTube footage appears to show Williams performing a Muslim prayer in the changing room before his debut for Canterbury against Bay of Plenty in the ITM Cup last year.

Williams’ friend Tairek Smith said he had regularly prayed with the 1.91m, 108kg second five-eighth since he embraced the Sunni branch of Islam during a ceremony at the Regent’s Park mosque in Sydney’s western suburbs in 2008, where former Canterbury Bulldogs teammate Hazem El Masri attends.

All Black manager Darren Shand said the star’s religious beliefs had a “minimal” impact on the team.

He said: “He has talked to us about his dietary needs and we do make some concessions there. We request halal beef and so on but he doesn’t make a big deal of it.

“We always leave players’ religious affiliations and a lot of those holistic things outside of the game. That’s their personal life and they decide what they do.”

When asked if his faith clashed with the All Blacks’ philosophy for encouraging players to be free thinking and self reliant, Shand said Williams was a “sponge” for information.

“That’s why he is so good at all the sports he has been involved in. He just ticks all the boxes. He wants to be the best.”

Since converting to Islam, Williams has put a string of embarrassing alcohol-related incidents behind him.

He is in training for the Crusaders’ Super Rugby campaign and was unavailable for comment.