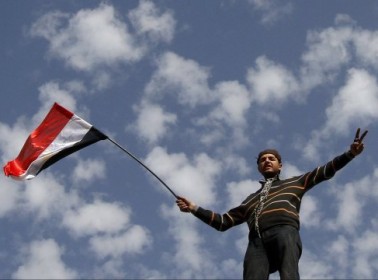 While the many and far-reaching implications of Friday’s transfer of power to what is apparently a military junta in Egypt have yet to be absorbed here, the role of the Muslim Brotherhood in any transition to a more democratic regime is certain to figure high on the political agenda.

For a number of prominent politicians and commentators, especially those closely associated with the so-called “Israel lobby”, the Brotherhood’s possible pathway to power in Cairo constitutes the nightmare scenario which Washington should do everything it can to prevent.

Indeed, the fact Friday’s dramatic events coincided with the 32nd anniversary of the 1979 Islamic Revolution in Iran – another day of popular jubilation that was followed, however, by bitter factional struggles ending with the consolidation of a radical Islamist and bitterly anti-U.S. and anti-Zionist regime – offered a poignant reminder that liberation from oppressive Middle Eastern rulers does not always turn out well, at least from Washington’s perspective.

Thus, while calling for “a calm and orderly transition process towards freedom and democracy in Egypt”, the Republican chair of the influential House of Representatives Foreign Affairs Committee, Florida Republican Ileana Ros- Lehtinen, Friday said the Brotherhood should be excluded from the process.

“We must … urge the unequivocal rejection of any involvement by the Muslim Brotherhood and other extremists who may seek to exploit and hijack these events to gain power, oppress the Egyptian people, and do great harm to Egypt’s relationship with the United State, Israel, and other free nations,” she said in a statement.

Similarly, in an his weekly op-ed in the Washington Post Friday, Charles Krauthammer, a neo-conservative hard-liner who coined the phrase “the Unipolar Moment” in celebration of Washington’s global hegemony after the Soviet Union’s collapse, warned that “Islamism” had taken the place of Communism in the “long twilight struggle” for freedom.

“Therefore, just as during the Cold War the United States helped keep European communist parties out of power (to see them ultimately wither away),” he wrote, “it will be U.S. policy to oppose the inclusion of totalitarian parties – the Muslim Brotherhood or, for that matter, communists – in any government, whether provisional or elected, in newly liberated Arab states.”

Widely considered the best organised and most disciplined political grouping in Egypt, the Brotherhood, whose popularity is credited to its network of social and medical services for poorer sectors in the society, as well as its longstanding opposition to and persecution by the Mubarak regime, is believed to hold the loyalty of as much of 30 percent of the population.

In the 2005 parliamentary election, candidates associated with the Brotherhood – the party itself has been officially banned since 1954 – won 20 percent of the seats in the Egyptian Parliament. They received only negligible support in last November’s elections which, according to local and international observers, was blatantly rigged in favour of the ruling National Democratic Party whose future is now considered very uncertain.

The big question here is whether and, if so, how the Obama administration will deal with the Brotherhood – a question that top officials have clearly not yet resolved.

U.S. diplomats and intelligence officials have met informally with Brotherhood leaders sporadically in the 1990s, primarily for purposes of assessing the political situation in Egypt. After the 2005 elections, some U.S. lawmakers, including a senior member of the House Democratic leadership, held meetings with their Egyptian counterparts, including Brotherhood members.

But while the administration has been in close contact with secular political leaders – as with senior Egyptian military officers through their Pentagon counterparts – since demonstrations began Jan 25, they had not consulted directly with Brotherhood leaders, according to the deputy national security adviser, who briefed reporters late Wednesday.

At the same time, the administration has repeatedly insisted that any political transition to a more democratic regime must be an “inclusive process” embracing all political groups. And earlier this week, White House spokesman Robert Gibbs said it “has to include a whole host of important non- secular actors” – a notion that drew special scorn from Krauthammer.

“Why gratuitously legitimise Islamists?” he asked, stressing that “Americans should be urgently supporting secular democratic parties in Egypt and elsewhere with training, resources, and diplomacy.”

Concerns about the Brotherhood here are based primarily on its historic opposition to Zionism, and particularly its position that the 1979 Camp David Accords with Israel should be scrapped.

Its close ties to the Palestinian Hamas, which the State Department lists as a “terrorist” organisation, is also of great concern here to the Israel lobby. If the Brotherhood were to exercise power in any new regime, it is widely accepted here, Egypt’s cooperation with Israel’s blockade of Hamas-ruled Gaza would end.

The fact that al Qaeda’s second-in-command, Ayman Zawahiri, was a member of the Brotherhood before it adopted a policy of non-violence has also been cited repeatedly by those who believe Washington should oppose any process that could bring it to power. To some commentators, like Clifford May of the Foundation for the Defense of Democracies, the Brotherhood is the “soft” edge of a global “jihad” movement, while al Qaeda and Iran represent the “hard” edges.

Finally, the fact that the Brotherhood has supported the application of Sharia, or Islamic law, to Egypt’s judicial system, according to many of its critics here, raises key questions about its commitment to basic democratic principles, notably the status of women.

In op-eds appearing in both the Post and the New York Times this week, Brotherhood leaders have sought to rebut many of these concerns, in part by insisting, as a member of its guidance council, Essam El-Errian wrote in the Times, it had no intent either “to take a dominant role in the forthcoming political transition” or to put “forward a candidate for the presidential elections schedule for September.

“(A)ny future government we may be a part of will respect all treaty obligations in accordance with the interests of the Egyptian people,” wrote another Brotherhood leader, Abdel Moneim Abou el-Fotouh, in the Post, stressing as well that the group had been the victim of “patent falsehoods, fear mongering and propaganda …concocted against us in Mubarak’s palaces the past 30 years and by some of his patrons in Washington.”

Most regional specialists agree that the worst fears that have circulated about the Brotherhood are either exaggerated or unfounded.

Indeed, some have noted that a successful democratic transition that includes the Brotherhood would constitute a serious setback to al Qaeda, which has bitterly attacked the group in recent years precisely for practicing non-violence and committing itself to democratic processes.

Even a few prominent neo-conservatives, notably the Brookings Institution’s Robert Kagan, have defended the Brotherhood against some of its charges and called for Washington to accept it as a necessary participant in the transition process.

“What are we going to do – support dictators for the rest of eternity because we don’t want Islamists taking their share of some political system in the Middle East?” Kagan, who co- chairs the bipartisan Working Group on Egypt which repeatedly urged the White House to break with Mubarak over the past two and a half weeks. “We’ve got to put our money where our mouth is.”