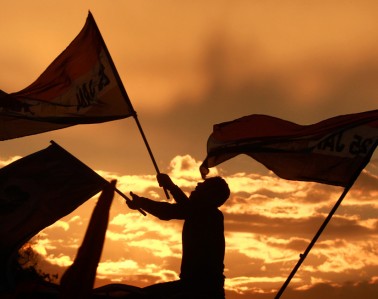 Here’s something from Egypt to cheer you up at last.

President Hosni Mubarak’s speechwriter enters his office in a tearing hurry with a piece of paper in his hand. “Here you go, Mr. President! Your final address to the nation.”

“What happened?” asks a stunned Mubarak. “Are all Egyptians leaving the country?”

The Egyptians are known throughout the Arab world for their zany, irrepressible sense of humor. So I am sure this, posted on a website frequented by fellow travelers of the Diaspora, must have originated in the land of pyramids and pharaohs. But seriously speaking, how ludicrously blasé and brazen can one get?

Nearly 85 million people have been out there on the streets for over two weeks now, cursing and shouting at the top of their voice asking you to leave, take a hike, as many of those placards demand. Nothing seems to work on the teflon tough satraps of the empire though. The crescendo rising from the streets of Egypt is piercing the skies and has, as Noam Chomsky warns, set the Arab world on fire.

When will you see that enough really is enough? What will it take for the relics of the empire to realize that they are long past their sell-by date? When do you see the unmistakable writing on the wall that you’ve outstayed your welcome? After enjoying 30 summers of absolute power and at the age of 82, maybe it’s time to leave?

But clearly for some, time stands still forever in the black hole that is the post imperial Middle East. Like the proverbial ostrich, they stick their heads in the sand and persuade themselves the world around them hasn’t moved a jot.

History is littered with rulers who insisted, convincing even themselves that “Après moi, le deluge!” (“After me, the deluge!”). No wonder, our own version of “dear leader” warns the friends in the West that he’s “fed up” of staying in power. The sacrifices our leaders have to make in the national interest!

But if the Egyptian regime believes such shenanigans will help it to hold on to power for a few more months and years, it’s in for a rude surprise. Nothing and no one can pre-empt or prevent the imminent now. The die has been cast. Whatever happens now, Egypt and the Middle East will never be the same again.

After long years of repression, the people of Egypt have thrown out the yoke, the albatross around their neck. They have crossed the Rubicon and nothing can now persuade them to go back. The persistent “go Mubarak go” chants rising from the Tahrir Square are also driven by the fact that the protesters know that if they leave before Mubarak leaves, an unthinkable retribution awaits them and their country.

This genuinely democratic, watershed change is almost impossible to derail now, no matter what the scheming Israelis and their nervous patrons think.

What makes this movement that has captured the world imagination truly historic is the fact that it has rediscovered and revived the confidence and unleashed the fighting spirit of the long demoralized and dormant Arabs.

As an Arab writer wrote last week, the Arabs haven’t witnessed any significant victory or memorable achievement since the glorious victory of Salahuddin Ayuubi (Saladin the Great), the conqueror of Jerusalem, 800 years ago over the Crusaders. The legacy of the great warrior king lives on in the proud falcon that is the insignia of Egyptian Army, and that of numerous Arab countries.

Those marching on the streets of Egypt and elsewhere in the region give hope and a sense of purpose and direction to the faceless, long repressed multitudes across the Arab-Muslim world and beyond!

Suddenly, it’s cool to be an Arab, easily the most vilified, dehumanized and demonized character in Western popular culture. Those young people — and old — standing their ground at the Tahrir Square day after day with a simple yet defiant finality make you proud.

The Tahrir Square has elbowed out the Tiananmen Square and will remain seared in popular imagination for years to come, long after Mubarak is gone. No wonder people around the world, from Americas to Australia, are increasingly standing up to make common cause with the people of Egypt.

In his much quoted 2009 Cairo speech, and before that in the profound Inaugural address, President Barack Obama had reached out to the Arabs and Muslims, seeking a “new way forward.”

And people of the Middle East have given him just that: A new way forward! Yet all you’ve heard from Washington — and from other Western capitals — over the past two weeks is either deafening silence or diplomatic gobbledygook that means nothing. As usual, the animus emanates from Israel. Netanyahu warns in a mislead statement littered with ulterior motives: “When there are rapid changes, as it happened in Iran, an oppressive regime of radical Islam will rise. Such a regime will crush human rights and will not allow democracy or freedom, and will constitute a threat to peace.”

Now we need lessons in democracy, freedom and human rights from those who have stolen someone else’s land imprisoning its population! Hillary Clinton seconds Netanyahu arguing, “revolutions have overthrown dictators in the name of democracy, only to see the process hijacked by new autocrats.”

What’s the West really afraid of? What’s it about Islam that so terrifies the champions of democracy and freedom of faith? But it’s not just Islam, as Chomsky argues, but independence of the Middle East that worries the West.

In a fine dispatch this week from Cairo titled, Tehran 1979 or Berlin1989?, Roger Cohen pleads with the US and Israel to not handle Egypt the way they dealt with Iran after the revolution. He plumps for a more “nuanced approach” that helped the West bring down the so-called evil empire and regimes across Eastern Europe. So what’s it going to be? Tehran 1979 or Berlin 1989? Whichever way Washington and London go, it’s not going to be the Egyptians’ way. Gone is the time of the empire ruling by proxy. It’s time for the people of Egypt – and the Middle East – to chart their own future without the expert advice or promptings of the empire. Call it Islamic resurgence, Arab revival or whatever but a giant has awakened after long centuries of slumber. Change is in the air.