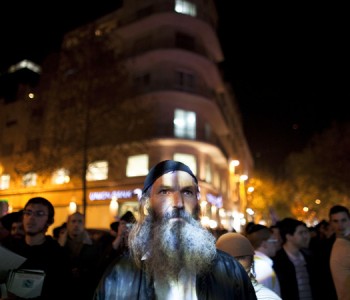 As Egyptians demand their freedom, I ask a Muslim in Jaffa if we will see the same in Israel. “I don’t think so,” he answers. “Even with all the mess here, we have democracy.”

But, do we? And for how much longer?

As we speak, the Knesset is debating one of a slew of anti-democratic bills. Some of the legislation targets Palestinian citizens of Israel – people like this man and his wife, who is quick to offer me coffee and her opinions.

If the Admissions Committee law passes, for example, this young couple and their three children could find themselves barred from living in certain communities and villages, even those built on public land. If the Nakba Bill is approved, organisations that commemorate the 1948 expulsion of Palestinians will be ineligible for public funds. This is a “watered down” version of the bill. The original version sought to imprison anyone who publicly marked the Nakba Day. Other legislation aims to silence individuals and groups that criticise the government.

The Israeli Democracy Institute (IDI) says that such bills pose “serious threats” to the country. Explaining that the death of democracy is “a gradual process,” the IDI, a non-partisan think-tank based in Jerusalem, warns: “People who are concerned but are waiting for the ‘moment of real danger’ to abandon their routines and take steps to defend democracy are making a mistake. The moment of real danger is now.”

It is worth noting that the IDI managed to publish this op-ed in The Jerusalem Post, a centre-right daily, while the centre-left newspaper Haaretz has recently published a number of pieces voicing similar concerns about Israel’s democracy. This suggests that even the Israeli centre – however apathetic – is worried about the state of the state.

Some critics might say that Israel was never a democracy in the true sense of the word. Arab citizens of the state were under martial law from 1949 to 1966. A year later, the decidedly undemocratic occupation of Palestinian territories began.

Knesset member Dov Khenin, of the Jewish-Arab party Hadash, puts it like this: “In Israel there is a specific democratic space. It’s not big, and in connection to the topic of Arabs, it’s even smaller. But the space is important to us because it’s the space we’re standing in.”

He gestures to the room in Jaffa, where he is giving a talk under the banner of “The Danger of Fascism”. There are about 20 people present – a sad number considering what is at stake.

“What has happened in recent years – and it’s a process that’s very dangerous – is that the space is being attacked and clamped down upon,” Khenin continues.

“One of the attacks is coming in the form of racism,” he says.

“The process is spreading,” Khenin adds. “And if we look at the past two years, it’s not just the Arab population, [the government is] also attacking Jews who think differently.”

That assault is coming in the form of anti-democratic legislation that would limit free speech and campaigns against Israeli human rights organisations.

The Boycott Bill seeks to criminalise those who advocate for the international boycott of Israel, subjecting them to steep fines.

The Anti-Incitement Bill criminalises those who publish anything that denies Israel’s Jewish and democratic character. Because I have authored articles calling for a bi-national democracy, this one could land me in jail. (And, if I’m already headed for the clinker, I might as well state the obvious: A country that must force people to call it democratic, on pain of imprisonment, is not a democracy).

And the Knesset is considering the creation of committees that will investigate the funding of left-wing civil and human rights organisations – most of which are critical of the Israeli occupation. Critics have likened the move to a political witch-hunt as right-wing groups will not be investigated. They also point out that such an investigation, which is the responsibility of the legal branch, would exceed the Knesset’s power.

So the question remains: Will Israel become out-right fascist?

At an October protest against legislation commonly referred to as the loyalty oath – a bill that would require non-Jews seeking Israeli citizenship to pledge allegiance to a “Jewish and democratic” state – Gavriel Solomon, a prominent academic and peace activist, likened Israel to Nazi Germany, circa 1935.

That was the year that the Nuremberg Laws – racist legislation that led to the systematic and deadly persecution of Jews – were created.

“There were no [concentration] camps yet but there were racist laws,” he said. “And we are heading towards these kinds of laws.”

Speaking to Al Jazeera by telephone, Solomon softened his message, remarking that: “The question was really if we are not sliding towards fascism.”

“Even though we very clearly have people like [Avigdor] Lieberman [the foreign minister] who are not sensitive to the issue … there [are] enough people on the right not to allow such Lieberman laws to go through,” he says, pointing to members of Likud like Dan Meridor.

But Haaretz recently revealed that right-wing activists are working in Jewish settlements to recruit Likud voters who would push Meridor out of the Knesset.

And rightists are taking other moves to silence dissent. Haaretz reports that they have successfully shut down the Facebook pages of several left-wing groups.

Depending on how these right-wingers spin their projects – are they trying to silence dissent or are they taking necessary measures for Israel’s image and security – the Israeli public may be willing to march lockstep with them.

A recent poll, conducted by the Geocartography Knowledge Group, found that more than half of Jewish Israelis are willing to limit press freedom if the media poses a threat to the state’s image. And nearly two-thirds would clamp down on freedom of speech for the sake of security.

The Association for Civil Rights in Israel (ACRI) is one of the organisations leading the fight against anti-democratic legislation. Spokeswoman Ronit Sela remarks: “I think what’s troublesome is that it’s not just groups or people on the street that are voicing things that are racist and anti-democratic … [it is] the Knesset and the government.”

“And we don’t see such a strong opposition from the Prime Minister [Binyamin Netanyahu].”

Sela emphasises that whether or not the bills pass they are damaging.

“When the person on the street reads in the newspaper that there are Knesset members who want to interrogate these organisations about their funding, it makes an impression,” she says. “Damage has already been done to the reputation of the human rights organisations, to the Arabs of this country and to the Jewish citizens who work with them.”

“It is anti-democratic content that is slipping into the Israeli mainstream,” she adds.

Just as Sela warns against focusing solely on the passage of legislation, Khenin cautions against pinning Israel’s political crisis on one person or group.

He points to a weak high court and problems within Israel’s political parties, as well as a political centre that has disappeared and can no longer keep the right in check.

Khenin points out that not long before Netanyahu became prime minister he called Palestinian citizens of Israel a demographic threat. “And now he’s head of the government,” he adds.

And because the death of democracy is tied up with the occupation, “a people who oppresses another people cannot be free,” Khenin says, paraphrasing Friedrich Engels.

Change is in the air

Will the people hit the streets for democracy?

Oded is a 29-year-old industrial designer who asked to be identified by a pseudonym because he fears social and professional repercussions from voicing his political opinions and doing so on an “Arab” media outlet.

He says that, if current trends continue, it is likely that Israel will see a fascist government. In the past, Oded recalls, dissenting opinions were tolerated. “Now, it’s impossible to say anything against the state or the government. If you do, you’re a ‘traitor’ because the state is the value that’s important.”

And Oded, the grandson of Holocaust survivors, remarks that this kind of ultra-nationalism is at the root of both racism and fascism.

“Are you going to protest?” I ask.

“No,” he says. “Right now, however self-centred it sounds, it doesn’t really interest me because I have things in my personal life that are more important. And I’m lazy.”

When I ask him if he thinks such apathy might allow extremists to take over, he nods. “I think [if we had a fascist government,] I would just leave,” he says, voicing something I have heard many Israelis say.

A recent demonstration held under the banner “March for Democracy while we still can,” attracted some 20,000. Many held signs that read: “Jews and Arabs refuse to be enemies.”

And, on Saturday night, some 200 Palestinian citizens of Israel and far-left Jewish Israeli activists gathered to stand in solidarity with Egypt’s pro-democracy protestors and to demonstrate against oppression in Israel.

A Palestinian-Israeli demonstrator said, in Hebrew, that the Middle East must get rid of “the three b’s: Barak, Bibi [Netanyahu] and Mubarak”.

While meaningful change is probably a long way off for Israel – it may take something huge, like fascism, to wake Jewish Israelis from their apathy and dreams of maintaining both a Zionist and democratic state – change is in the air.