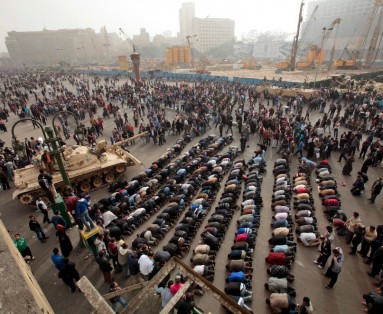 I remember the images well, even though I was too young to understand their political significance. But they were visceral, those photos in the New York Times from Tehran in the midst of its revolutionary moment in late 1978 and early 1979. Not merely exuberance jumped from the page, but also anger; anger fuelled by an intensity of religious fervour that seemed so alien as to emanate from another planet to a “normal” pre-teen American boy being shown the newspaper by his father over breakfast.

Many commentators are comparing Egypt to Iran of 32 years ago, mostly to warn of the risks of the country descending into some sort of Islamist dictatorship that would tear up the peace treaty with Israel, engage in anti-American policies, and deprive women and minorities of their rights (as if they had so many rights under the Mubarak dictatorship).

I write this on February 2, the precise anniversary of Khomeini’s return to Tehran from exile. It’s clear that, while religion is a crucial foundation of Egyptian identity and Mubarak’s level of corruption and brutality could give the Shah a run for his money, the situations are radically different on the ground.

A most modern and insane revolt

The following description, I believe, sums up what Egypt faces today as well as, if not better, than most:

“It is not a revolution, not in the literal sense of the term, not a way of standing up and straightening things out. It is the insurrection of men with bare hands who want to lift the fearful weight, the weight of the entire world order that bears down on each of us – but more specifically on them, these … workers and peasants at the frontiers of empires. It is perhaps the first great insurrection against global systems, the form of revolt that is the most modern and the most insane.

One can understand the difficulties facing the politicians. They outline solutions, which are easier to find than people say … All of them are based on the elimination of the [president]. What is it that the people want? Do they really want nothing more? Everybody is quite aware that they want something completely different. This is why the politicians hesitate to offer them simply that, which is why the situation is at an impasse. Indeed, what place can be given, within the calculations of politics, to such a movement, to a movement through which blows the breath of a religion that speaks less of the hereafter than of the transfiguration of this world?”

The thing is, it was offered not by some astute commentator of the current moment, but rather by the legendary French philosopher Michel Foucault, after his return from Iran, where he witnessed firsthand the intensity of the revolution which, in late 1978, before Khomeini’s return, really did seem to herald the dawn of a new era.

Foucault was roundly criticised by many people after Khomeini hijacked the revolution for not seeing the writing on the wall. But the reality was that, in those heady days where the shackles of oppression were literally being shattered, the writing was not on the wall. Foucault understood that it was precisely a form of “insanity” that was necessary to risk everything for freedom, not just against one’s government, but against the global system that has nuzzled him in its bosom for so long.

What was clear, however, was that the powers that most supported the Shah, including the US, dawdled on throwing their support behind the masses who were toppling him. While this is by no means the principal reason for Khomeini’s successful hijacking of the revolution, it certainly played an important role in the rise of a militantly anti-American government social force, with disastrous results.

While Obama’s rhetoric moved more quickly towards the Egyptian people than did President Carter’s towards Iranians three decades ago, his refusal to call for Mubarak’s immediate resignation raises suspicion that, in the end, the US would be satisfied if Mubarak was able to ride out the protests and engineer a “democratic” transition that left American interests largely intact.

The breath of religion

Foucault was also right to assign such a powerful role to religion in the burgeoning revolutionary moment – and he experienced what he called a “political spirituality”, But, of course, religion can be defined in so many ways. The protestant theologian Paul Tillich wonderfully described it as encompassing whatever was of “ultimate concern” to a person or people. And today, clearly, most every Egyptian has gotten religion from this perspective.

So many people, including Egypt’s leaders, have used the threat of a Muslim Brotherhood takeover to justify continued dictatorship, with Iran as the historical example to justify such arguments. But the comparison is plagued by historical differences. The Brotherhood has no leader of Khomeini’s stature  and foreswore violence decades ago. Nor is there a culture of violent martyrdom ready to be actualised by legions of young men, as occurred with the Islamic Revolution. Rather than trying to take over the movement, which clearly would never have been accepted – even if its leaders wanted to seize the moment, the Brotherhood is very much playing catch up with the evolving situation and has so far worked within the rather ad hoc leadership of the protests.

But it is equally clear that religion is a crucial component of the unfolding dynamic. Indeed, perhaps the iconic photo of the revolution is one of throngs of people in Tahrir Square bowed in prayers, literally surrounding a group of tanks sent there to assert the government’s authority.

This is a radically different image of Islam than most people – in the Muslim world as much as in the West – are used to seeing: Islam taking on state violence through militant peaceful protest; peaceful jihad (although it is one that has occurred innumerable times around the Muslim world, just at a smaller scale and without the world’s press there to capture it).

Such imagery, and its significance, is a natural extension of the symbolism of Mohamed Bouazizi’s self-immolation, an act of jihad that profoundly challenges the extroverted violence of the jihadis and militants who for decades, and especially since 9/11, have dominated the public perception of Islam as a form of political spirituality.

Needless to say, the latest images – of civil war inside Tahrir Square – will immediately displace these other images. Moreover, if the violence continues and some Egyptian protesters lose their discipline and start engaging in their own premeditated violence against the regime and its many tentacles, there is little doubt their doing so will be offered as “proof” that the protests are both violent and organised by the Muslim Brotherhood or other “Islamists”.

A greater threat than al-Qa’eda

As this dynamic of nonviolent resistance against entrenched regime violence plays out, it is worth noting that so far, Osama bin Laden and his Egyptian deputy, Ayman Al-Zawahiri, have had little – if anything – of substance to say about the revolution in Egypt. What they’ve failed to ignite with an ideology of a return to a mythical and pure beginning – and a strategy of human bombs, IEDs, and planes turned into missiles – a disciplined, forward-thinking yet amorphous group of young activists and their more experienced comrades, “secular” and “religious” together (to the extent these terms are even relevant anymore), have succeeded in setting a fire with a universal discourse of freedom, democracy and human values – and a strategy of increasingly calibrated chaos aimed at uprooting one of the world’s longest serving dictators.

As one chant in Egypt put it succinctly, playing on the longstanding chants of Islamists that “Islam is the solution”, with protesters shouting: “Tunisia is the solution.”

For those who don’t understand why President Obama and his European allies are having such a hard time siding with Egypt’s forces of democracy, the reason is that the amalgam of social and political forces behind the revolutions in Tunisia, Egypt today – and who knows where tomorrow – actually constitute a far greater threat to the “global system” al-Qa’eda has pledged to destroy than the jihadis roaming the badlands of Afghanistan, Pakistan, or Yemen.

Whether Islamist or secularist, any government of “of the people” will turn against the neoliberal economic policies that have enriched regional elites while forcing half or more of the population to live below the $2 per day poverty line. They will refuse to follow the US or Europe’s lead in the war on terror if it means the continued large scale presence of foreign troops on the region’s soil. They will no longer turn a blind eye, or even support, Israel’s occupation and siege across the Occupied Palestinian territories. They will most likely shirk from spending a huge percentage of their national income on bloated militaries and weapons systems that serve to enrich western defence companies and prop up autocratic governments, rather than bringing stability and peace to their countries – and the region as a whole.

They will seek, as China, India and other emerging powers have done, to move the centre of global economic gravity towards their region, whose educated and cheap work forces will further challenge the more expensive but equally stressed workforces of Europe and the United States.

In short, if the revolutions of 2011 succeed, they will force the creation of a very different regional and world system than the one that has dominated the global political economy for decades, especially since the fall of communism.

This system could bring the peace and relative equality that has so long been missing globally – but it will do so in good measure by further eroding the position of the United States and other “developed” or “mature” economies. If Obama, Sarkozy, Merkel and their colleagues don’t figure out a way to live with this scenario, while supporting the political and human rights of the peoples of the Middle East and North Africa, they will wind up with an adversary far more cunning and powerful than al-Qa’eda could ever hope to be: more than 300 million newly empowered Arabs who are mad as hell and are not going to take it any longer.