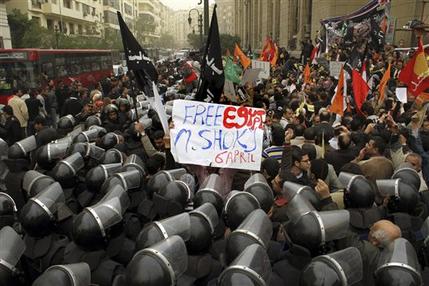 The Paris-based organization said telecommunications and Internet services account for between 3% and 4% of Egypt’s GDP, so the daily loss amounted to around $18 million.

The Internet block was lifted on Wednesday, but it might be much longer before the true cost of the government’s action on the economy is known.

By cutting telecommunications links, the government severed links between domestic and international high-tech firms and the rest of the world. As a result, the OECD warned, Egypt could find it “much more difficult in the future to attract foreign companies and assure them that the networks will remain reliable.”

In minutes, the amount of Internet traffic flowing between Egypt and the rest of the world was reduced to a trickle, according to monitoring by Massachusetts-based Arbor Networks.

“We have never seen a country as connected as Egypt completely lose Internet connectivity for such an extended period,” said Craig Labovitz, chief scientist at Arbor Networks, on the company’s security blog.

“Unlike periods as recent as a decade ago, governments of technically developed countries cannot disrupt telecommunication without incurring significant economic cost and social / political pressures,” he said