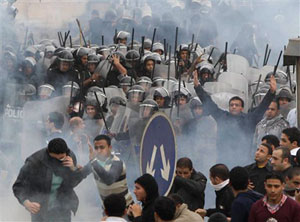 The uprising in Egypt, although united around the nearly universal desire to rid the country of the military dictator Hosni Mubarak, also presages the inevitable shift within the Arab world away from secular regimes toward an embrace of Islamic rule. Don’t be fooled by the glib sloganeering about democracy or the facile reporting by Western reporters—few of whom speak Arabic or have experience in the region. Egyptians are not Americans. They have their own culture, their own sets of grievances and their own history. And it is not ours. They want, as we do, to have a say in their own governance, but that say will include widespread support—especially among Egypt’s poor, who make up more than half the country and live on about two dollars a day—for the Muslim Brotherhood and Islamic parties. Any real opening of the political system in the Arab world’s most populated nation will see an empowering of these Islamic movements. And any attempt to close the system further—say a replacement of Mubarak with another military dictator—will ensure a deeper radicalization in Egypt and the wider Arab world.

The only way opposition to the U.S.-backed regime of Mubarak could be expressed for the past three decades was through Islamic movements, from the Muslim Brotherhood to more radical Islamic groups, some of which embrace violence. And any replacement of Mubarak (which now seems almost certain) while it may initially be dominated by moderate, secular leaders will, once elections are held and popular will is expressed, have an Islamic colouring. A new government, to maintain credibility with the Egyptian population, will have to more actively defy demands from Washington and be more openly antagonistic to Israel. What is happening in Egypt, like what happened in Tunisia, tightens the noose that will—unless Israel and Washington radically change their policies toward the Palestinians and the Muslim world—threaten to strangle the Jewish state as well as dramatically curtail American influence in the Middle East.

The failure of the United States to halt the slow-motion ethnic cleansing of Palestinians by Israel has consequences. The failure to acknowledge the collective humiliation and anger felt by most Arabs because of the presence of U.S. troops on Muslim soil, not only in Iraq and Afghanistan but in the staging bases set up in Kuwait and Saudi Arabia, has consequences. The failure to denounce the repression, including the widespread use of torture, censorship and rigged elections, wielded by our allies against their citizens in the Middle East has consequences. We are soaked with the stench of these regimes. Mubarak, who reportedly is suffering from cancer, is seen as our puppet, a man who betrayed his own people and the Palestinians for money and power.

The Muslim world does not see us as we see ourselves. Muslims are aware, while we are not, that we have murdered tens of thousands of Muslims in Iraq, Afghanistan and Pakistan. We have terrorized families, villages and nations. We enable and defend the Israeli war crimes carried out against Palestinians and the Lebanese—indeed we give the Israelis the weapons and military aid to carry out the slaughter. We dismiss the thousands of dead as “collateral damage.” And when those who are fighting against occupation kill us or Israelis we condemn them, regardless of context, as terrorists. Our hypocrisy is recognized on the Arab street. Most Arabs see bloody and disturbing images every day from the wars in Iraq and Afghanistan, images that are censored on our television screens. They have grown sick of us. They have grown sick of the Arab regimes that pay lip service to the suffering of Palestinians but do nothing to intervene. They have grown sick of being ruled by tyrants who are funded and supported by Washington. Arabs understand that we, like the Israelis, primarily speak to the Muslim world in the crude language of power and violence. And because of our entrancement with our own power and ability to project force, we are woefully out of touch.  Israeli and American intelligence services did not foresee the popular uprising in Tunisia or Egypt. Gen. Aviv Kochavi, Israel’s new intelligence chief, told Knesset members last Tuesday that “there is no concern at the moment about the stability of the Egyptian government.” Tuesday, it turned out, was the day hundreds of thousands of Egyptians poured into the streets to begin their nationwide protests.

What is happening in Egypt will damage and perhaps unravel the fragile peace treaty between Egypt and Jordan with Israel. It is likely to end Washington’s alliance with these Arab intelligence services, including the use of prisons to torture those we have disappeared into our vast network of black sites. The economic ties between Israel and these Arab countries will suffer. The current antagonism between Cairo and the Hamas government in Gaza will be replaced by more overt cooperation. The Egyptian government’s collaboration with Israel, which includes demolishing tunnels into Gaza, the sharing of intelligence and the passage of Israeli warship and submarines through the Suez Canal, will be in serious jeopardy. Any government—even a transition government that is headed by a pro-Western secularist such as Mohamed ElBaradei—will have to make these changes in the relationship with Israel and Washington if it wants to have any credibility and support. We are seeing the rise of a new Middle East, one that will not be as pliable to Washington or as cowed by Israel.

The secular Arab regimes, backed by the United States, are discredited and moribund. The lofty promise of a pan-Arab union, championed by the Egyptian leader Gamal Abd-al-Nasser and the original Baathists, has become a farce. Nasser’s defiance of Washington and the Western powers has been replaced by client states. The secular Arab regimes from Morocco to Yemen, for all their ties with the West, have not provided freedom, dignity, opportunity or prosperity for their people. They have failed as spectacularly as the secular Palestinian resistance movement led by Yasser Arafat. And Arabs, frustrated and enduring mounting poverty, are ready for something new. Radical Islamist groups such as the Palestinian Hamas, the Shiite Hezbollah in Lebanon and the jihadists fighting in Iraq and Afghanistan are the new heroes, especially for the young who make up most of the Arab world. And many of those who admire these radicals are not observant Muslims. They support the Islamists because they fight back. Communism as an ideological force never took root in the Muslim world because it clashed with the tenets of Islam. The championing of the free market in countries such as Egypt has done nothing to ameliorate crushing poverty. Its only visible result has been to enrich the elite, including Mubarak’s son and designated heir, Gamal. Islamic revolutionary movements, because of these failures, are very attractive. And this is why Mubarak forbids the use of the slogan “Islam is the solution” and bans the Muslim Brotherhood. These secular Arab regimes hate and fear Hamas and the Islamic radicals as deeply as the Israelis do. And this hatred only adds to their lustre.

The decision to withdraw the police from Egyptian cities and turn security over to the army means that Mubarak and his handlers in Washington face a grim choice. Either the army, as in Tunisia, refuses to interfere with the protests, meaning the removal of Mubarak, or it tries to quell the protests with force, a move that would leave hundreds if not thousands dead and wounded. The fraternization between the soldiers and the crowds, along with the presence of tanks adorned with graffiti such as “Mubarak will fall,” does not bode well for Washington, Israel and the Egyptian regime. The army has not been immune to the creeping Islamisation of Egypt—where bars, nightclubs and even belly dancing have been banished to the hotels catering to Western tourists. I attended a reception for middle-ranking army officers in Cairo in the 1990s when I was based there for The New York Times and every one of the officers’ wives had a head covering. Mubarak will soon become history. So, I expect, will neighbouring secular Arab regimes. The rise of powerful Islamic parties appears inevitable. It appears inevitable not because of the Quran or a backward tradition, but because we and Israel believed we could bend the aspirations of the Arab world to our will through corruption and force.