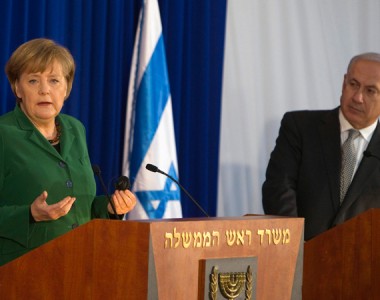 Binyamin Netanyahu, Israel’s prime minister, has said that he was following events in Egypt with “vigilance and worry”.

At a news conference alongside Angela Merkel, the German chancellor, on Monday in Jerusalem, Netanyahu said Egypt could wind up with a radical Islamic regime as in Iran.

He hoped Israel’s three-decade-old peace treaty with Egypt would survive any changes that were taking place.

Earlier, an Israeli newspaper had reported that Israel has called on the United States and Europe to curb their criticism of President Hosni Mubarak “in a bid to preserve stability in Egypt” and the wider Middle East.

The Israeli daily Haaretz reported that the foreign ministry, in an urgent special cable, instructed its ambassadors to key countries, to “stress … the importance of Egypt’s stability”.

Increasingly, president Mubarak has been isolated by swift and at times harsh criticism from Western leaders who called for reform.

It is unclear how angry Egyptians will interpret Israel’s apparent support for their government.

The protests in Egypt have reportedly thrown the Israeli government into turmoil, with military officials holding lengthy strategy sessions, assessing possible scenarios of a post-Mubarak Egypt.

Binyamin Netanyahu, Israel’s prime minister, said on Sunday that his government is “anxiously monitoring” the political unrest in Egypt, his first comment on the crisis threatening a government that has been one of Israel’s key allies for more than 30 years.

Israeli officials have remained largely silent about the situation in Egypt, but have made clear that preserving the historic 1979 peace agreement with the biggest Arab nation is a paramount interest.

The peace deal, cool but stable, turned Israel’s most potent regional enemy into a crucial partner, provided security on one of its borders and allowed it to significantly reduce the size of its army and defence budget.

“We are anxiously monitoring what is happening in Egypt and in our region,” Netanyahu said before his cabinet’s weekly meeting on Sunday.

“Israel and Egypt have been at peace for more than three decades and our objective is to ensure that these ties be preserved. At this time, we must display responsibility, restraint and utmost prudence,” Netanyahu added.

It was the first high-level comment from Israel on the Egypt protests, which began last week with disorganised crowds demanding the resignation of Mubarak and have grown into the most significant challenge to Egypt’s autocratic regime in recent memory.

Ehud Barak, the Israeli defence minister, discussed the situation in Egypt with Robert Gates, the US defence secretary, on Sunday, according to a statement from Barak’s office. No details of the discussion were released.

Over the weekend, Israel evacuated the families of its diplomats from Cairo and security officials began holding urgent consultations.

Israel’s primary concern is that the uprising could be commandeered by Egypt’s strongest opposition group, the Muslim Brotherhood, and its allies, who would presumably move Egypt away from its alignment with the West and possibly cancel the peace agreement with Israel.

“[…] Israelis, have been overtaken by fear: The fear of democracy. Not here, in neighbouring countries,” Sever Plocker, an Israeli commentator, writes in the daily Yediot Ahronot.

“Its as though we never prayed for our Arab neighbours to become liberal democracies,” Plocker writes.

The benefits to Israel of peace with Egypt have been significant. In the three decades before the peace agreement, Israel and Egypt fought four major wars.

Israel now spends nine per cent of its gross domestic product on defence, Shueftan said – compared with 23 per cent in the 1970s, when a state of war with Egypt still existed.

Where Israel once deployed thousands of soldiers along the Egyptian frontier, today there are several hundred. This reduction allowed the Israeli economy to begin flowering in the years after the peace deal, he said. Mubarak has also served as a mediator between Israel and the Palestinians.

If Egypt resumes its conflict with Israel, Israelis fear, it will put a powerful Western-armed military on the side of Israel’s enemies while also weakening pro-Western states like Jordan and Saudi Arabia.

“The assumption at present is that Mubarak’s regime is living on borrowed time, and that a transition government will be formed for the next number of months until new general elections are held,” he wrote.

“If those elections are held in a way that the Americans want, the most likely result will be that the Muslim Brotherhood will win a majority and will be the dominant force in the next government. That is why it is only a question of a brief period of time before Israel’s peace with Egypt pays the price,” Shaked wrote.

Some in Israel have compared US president Barack Obama’s response to the crisis to that of former US president Jimmy Carter to the Iranian revolution in 1979. Obama has called on Mubarak to show restraint and pass unspecified reforms in Egypt.

“Jimmy Carter will go down in American history as ‘the president who lost Iran’, which during his term went from being a major strategic ally of the United States to being the revolutionary Islamic republic,” Aluf Benn, an analyst in Haaretz, wrote.

“Barack Obama will be remembered as the president who ‘lost’ Turkey, Lebanon and Egypt, and during whose tenure America’s alliances in the Middle East crumbled.”

Still, the Obama administration has stopped short of calling for the resignation of president Mubarak, and as of Sunday, the Pentagon continued to have high-level discussions with the Egytian military.

Former Israeli general Yaakov Amidror said that in the short term, Israel will face increased smuggling activities in the Sinai peninsula, where the authority of the Cairo government has been further weakened by the unrest.

As a result of Israel’s blockade of the Gaza strip, widely lambasted as inhumane and an obstacle to the peace process, weapons, fuel and other goods enter the Hamas-controlled territory.

“They will now try to get in everything they couldn’t get in before,” Amidror said.

Israel captured Sinai in 1967 and then ceded it to Egypt in the 1979 peace deal. The area was demilitarised as part of the agreement.

For now, the unrest seems to have had the opposite effect. Gaza smugglers said the supply routes have been disrupted and that they have not received any merchandise from Egypt since Friday, apparently because of difficulties in transporting the goods across Egypt to the Gaza border.