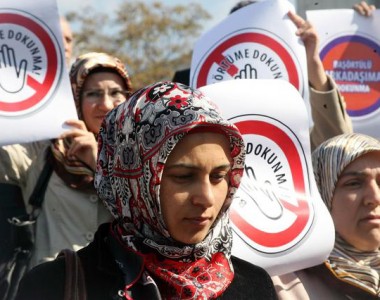 A ruling by an administrative court banning female candidates for academic posts from being veiled during an admission examination has brought the headscarf back to the front of Turkish politics, and reignited tensions between secularist and religious forces.

The crisis was triggered following an initiative by the Student Selection and Placement Centre (OSYM) to allow wearing of the headscarf during the Selection Examination for Academic Personnel and Graduate Studies (ALES).

A ban on this attire in higher education and public administration premises had been observed strictly until recently, but OSYM’s initiative led the Education and Science Workers’ Union (Egitim-Is) to file a complaint with the Council of State.

The Council of State is Turkey’s highest administrative instance, with large judicial and advisory powers in practically all state activities. It functions through a structure that controls 23 district chambers, 33 administrative courts and 63 tax courts.

The decision of the Council to maintain the ban has not gone well with the ruling Justice and Development (AK) Party.

Turkish Prime Minister and AKP leader Recep Tayyip Erdogan did not wear gloves in punching back at the Council. Addressing a businessmen association in Ankara after the ruling last week, he declared the decision “highly politicised”, “unfounded” in legal standing, and said prohibition of the headscarf was “unlawful”.

The opposition was quick to react. Defending the legitimacy of the Council’s acts and its constitutional status, Kemal Kilicdaroglu, chairman of the Republican People’s (CH) Party remarked that no one had the right to object to the Council’s conclusions. CHP, formed in 1923 by the Turkish Republic’s founder Mustafa Kemal, better known as Ataturk, is the largest minority party in the Grand National Assembly.

Secularism has been the driving force of the Republic for the past 88 years. Following the collapse of the Ottoman Empire at the end of World War I, and a successful independence war against the foreign powers that had appropriated parts of mainland Turkey, Ataturk embarked on modernizing his country by introducing western models, both in state governance and people’s lifestyle.

He saw religion as the main obstacle for the emancipation of the Turks, and abolished all state institutions that had been in the hands of, or influenced by the clerics. The dress code was associated with such influence. The headscarf for women and the fez for men were banned from public life, although individual religious freedom was not restricted. He and his entourage championed the western attire, from French-designed dresses to the tuxedo and top hat. Business and society in the urban areas followed suit, but no significant changes were noticed in the countryside.

Nationalists consider the headscarf a symbol of religious activism and social conservatism. Turkish governments since World War II have turned a blind eye to its use. But with the emergence of Islamic political parties in the 1990s, secular authorities have toughened their stance.

Since 1997 women covering their head are not allowed to enter public buildings, universities, or military premises, including military hospitals. Many who insisted on wearing the headscarf have been deprived of higher education, or have had to migrate abroad to pursue their studies and careers.

The Islam-rooted AKP, which has won the legislative elections twice since 2002 and appointed its member Abdullah Gul president in 2008, has made abolition of the ban a compelling theme in its political programme. In a country where 98 per cent of the population is Muslim, this seems a convincing argument with voters.

It is estimated that 65 per cent of Turkish women wear the headscarf, but there is no reliable research on the meaning they attach to it. The wives of the president and the prime minister are fervent supporters of the veil, and adorn themselves with fashionable silk foulards privately and at official ceremonies.

The AKP victory in 2007, when it won 47 per cent of the vote, led the ruling party to introduce legislation in 2008 to reverse restrictions on the headscarf. But the Constitutional Court invalidated the decision of the MPs. The issue went back to square one. Until last October.

Following a fresh triumph on Sep. 12 last year when the party won 52 per cent support in a referendum to amend the Constitution, the government felt strong enough to tackle the headscarf issue once more. The Higher Education Authority (YOK) issued a circular to the rectors of universities that no student should be excluded from attending class because of their dress. Most academics complied grudgingly, but there were cases of resistance. In one instance this led to suspension of a professor at Istanbul University.

OSYM seems to have followed YOK’s initiative. But it ran into the all-powerful Constitutional Council. This institution, first formed in mid-19th century during the reign of Sultan Mahmut II, was later reformed to match the model of the French Conseil d’Etat created in 1867 by Napoleon III.

Abolished by Ataturk in 1922 first as an Ottoman relic, it was restored on his request in the Turkish Constitution of 1924 (Art. 51). It has since been a major pillar of the Republic, safeguarding Ataturk’s doctrine on secularism, that is a mandatory component of the curriculum in secondary and undergraduate studies till today.

“I had to allow a head-scarfed young woman attend my course,” an Istanbul academic told IPS on condition of anonymity. “I was trapped: not accepting her might cost me my job; admitting her goes against the ruling of the Constitutional Court. The worst part was that, later during their association’s meeting, students expressed dissatisfaction with my tolerance. Damned if you do, damned if you don’t.”