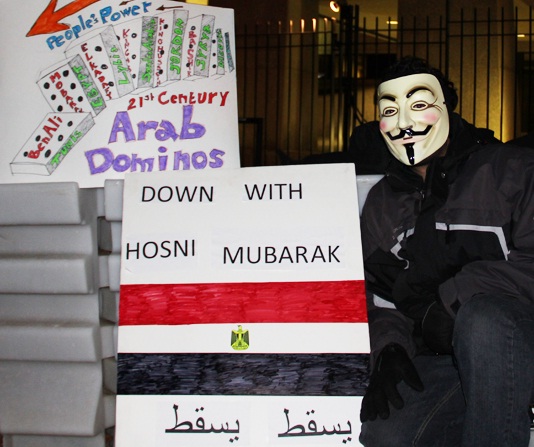 The events of the last few days and months are shaking the world and changing social and political landscapes that have been in place for decades. I suspect that the West, specifically the US and Europe, is starting to re-think it’s previous policies vis-a vis the Middle East and Muslim world. This has occurred not out of choice, but due to realities that have now changed forever.

My guess is that they basically can also no longer financially afford to engage their armies and proxies in direct/indirect warfare that could potentially take in a region from North West Africa all the way to Pakistan. These massive political changes we are witnessing have created new realities on the ground that cannot be ignored or spun as being insignificant.

Here is analysis of the situation as it stands now (keep in mind I have excluded Sudan, Somalia,Yemen and Afghanistan/Pakistan where the annual Taliban spring offensive on US/NATO troops will start soon) :

Although the plan to attack Iran has lost some steam, it is still very much on the table. All indications are that, regardless of any deals done via Turkey and Brazil to appease the West, it is no longer a question of if Iran will be attacked, but when.

The new Iraqi government that has finally come into place after months of negotiation is very heavily stacked with pro Iranian groups/politicians. If the previous government was stacked with American puppets, this one is full of Iranian ones.

It is for all intensive purposes an Iranian proxy government that will not act in contrary to Iranian interests. The Americans have virtually given up on Iraq and besides their military bases, all they have left there of value is the one sided oil contracts that were signed by the previous Iraqi puppet government. I guess that is what Iraq was always about for them in the first place – the oil. But how long will these contracts be honoured for, is anybody’s guess – especially if Iran is ever attacked.

Due to the Rafik Hariri assassination trial and the possible indictments that might occur from it, the pro American/Saudi government of Saad Hariri has been toppled and replaced by a pro Hezbollah/Syrian/Iranian government. This is going to further strengthen Hezbollah and again will mean that if Iran is attacked, it is now pretty much a fore gone conclusion that Israel will be attacked by Hezbollah in retaliation. Israel will start to feel uneasy and it will only take the smallest of incidents for hostilities to start again.

The release of the Palestine Papers by Aljazeera last week has exposed the Palestinian Authority to be unfit to represent, let alone negotiate, the future aspirations of the Palestinian people. They showed that the PA was willing to sacrifice the rights of millions of refugees and the lives of the people of Gaza in order to save face and maintain their position of privilege.

It has also exposed successive Israeli governments as being disingenuous peace partners.  Regardless of which party is in power,  they are all basically playing a time stalling political game while they build more settlements and create physical realities on the ground  that will forever prevent a proper functioning autonomous Palestinian state from ever being able to be established.

This has virtually brought to an end the so called peace process.

Who would have thought that the actions of one humble fruit and vegetable seller would be the trigger for the fall of the pro Western US backed Ben Ali regime and uprisings in Egypt, Yemen and Algeria? What has happened in Tunisia has shown the rest of the Arab world – especially the youth – that they do have a hope of change and a chance of a better future if they take actions into their own hands to make a difference.

It has also put a shiver through the spine of every despot dictator and his cronies that Interpol has warrants out for the arrest of the former Tunisian regimes leaders for stealing their nation’s wealth. Is it any wonder that there are reports coming out of Egypt of a mass exodus of Mubarak’s family and business cronies to overseas havens.

For anyone who has lived in Egypt or visited and had the “pleasure” of dealing with Mubarak’s hated Internal Police apparatus will know how courageous the protesters of Egypt are in challenging the authorities. You are talking about a country that has made oppression and torture such a fine art that it is recognised by the US and others as the best place to send prisoners for torture to extract information – aka CIA rendition.

With a internal police force of close to 2 million that daily spies on and subjugates 80 Million Egyptians into making life a living hell for anyone who dares challenge the military dictatorship of Hosni Mubarak and his cronies, the people of Egypt have been living in a political prison for over 30 years.

What has happened there in the past few days is that this apparatus of control via fear and intimidation has been broken forever. The people, led by the youth – Egypt’s median age is 25 – inspired by the events in Tunis, have stood up and realised that they can make a change if united. They now are emboldened and realise that whoever blinks first will lose heavily. They cannot back down now and must continue their defiance until they are free of their modern day Pharaoh.

The most interesting aspect is that this uprising started largely as a spontaneous reaction among mainly middle class youth co-ordinated via social media sites like facebook and twitter, and has grown to be a grass roots revolution that is inclusive of Egyptians from all walks of life. Muslim, Christian, young, old, women, children, poor, middle class, uneducated, professionals, judges, journalists – everyone has joined the cause.

In a sense, the people of Egypt are at the stage where they now have nothing too lose and many would rather die than continue living under oppression and poverty any longer.

The regime of Mubarak is brutal and will use dirty tactics to try and hold onto power. This is now being exposed to the world and can no longer be swept under the carpet. But there are consequences to this desperation.

Can you imagine Obama hosting Mubarak as the leader of Egypt at the White House again? It ain’t going to happen. Not that they didn’t know what he was like before – he is after all their “man” (read the Cairo Wiki Leak cables). But they can no longer be seen to be supporting him.

Egypt is the second biggest recipient of US foreign aid receiving over $1 Billion a year for the military alone. It is not a good look for your “man” to be tear gassing and shooting his own people with American supplied weapons.

The US was probably hunting around for a replacement after the January 25 2011 Day of Anger uprising changed things fundamentally forever. With a reported 4000 + US personnel in Egypt, I am sure they are probably more in touch with what is really happening on the ground than Mubarak himself. But the best they could come up with was Omar Sulieman, the intelligence chief who works closely with the Americans and Israel and is as despised by the Egyptian people as Mubarak.

From the messages coming out of Washington, the Americans may have come to the realisation, more so forced by circumstance, that the game of supporting puppet dictators will no longer work. It may be time to allow the people of the Middle East and Muslim world to dictate for themselves who their leaders should be, even if this means they are partly or fully Islamic governments. To a degree,  the realities on the ground mean they no longer have a choice.

If the people of Egypt choose via open and fair elections to install a government that includes the Muslim Brotherhood, why object to this if they can rule with moderation?  It is working in Turkey and Indonesia, why not Egypt. My guess is that the Israeli government and powerful Zionist lobby in the US will have their own counter opinions on the issue of Islamic governments/movements. Apparently they perceive all Islamic governments as hostile threats that must be contained either covertly or overtly – (read “Open Secrets: Israeli Nuclear & Foreign Policy” by Israel Shahak to get a better understanding of the Israeli establishment’s mindset regarding this issue).

Moreover regardless of what might happen in the future, unless the Egyptian army sides with the people in ending the Mubarak regime, allows free and democratic elections, restores proper law and order soon – especially the prevention of actions of agent provocateurs’ from within or outside of Egypt’s borders creating mayhem ( does anyone believe that Mubarak cronies or Mossad will let a possible part Islamic government’s establishment be a smooth ride?).

Unless these elements are implemented, I fear Egypt and the whole region is set to experience a period of great turmoil and violence. Of course the only ones who would support this scenario are the war mongers and religious extremists of all persuasions – be they Jewish, Christian or Muslim.

Just like the brave people of Tunisia and Egypt, it is up to the rest of us who believe in the universal human rights of basic freedoms and justice to stand up and take a stance to try and prevent the dictators, war mongers and extremists from implementing their agendas. If we fail to do so the blood and sacrifices of so many will have been spilt in vain.

Overall, although I am optimistic about the future of the people of the Muslim world in their aspirations and struggle to be independent and free of the dictators that have made the Muslim nation weak, backwards and subject to exploitation for decades. I am less optimistic that this is going to be achieved without further pain and great sacrifice in the short to midterm.

Not only do so many individuals, parties and special interests groups have much to lose and will not let go easily. But changing societies from decades of institutionalised oppression to ones that are open and free, does not happen overnight.

In the long term however I believe that tide has finally turned for the Muslim World and that history is now in the making. From the transformation of powerhouse countries like Turkey and God willing Egypt, to the personal transformation of individuals in their day to day life, a global Islamic resurgence is well and truly under way that is now unstoppable.