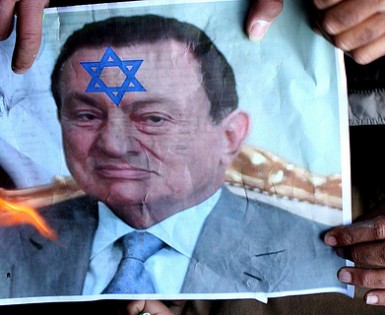 Days of rage in Egypt signify the end of days for Hosni Mubarak’s repressive and bankrupt regime. For 30 years, the president has held his country down through fear, secret police, emergency laws, American cash subsidies and a lamentable absence of vision and imagination. His crude, Gaullist message: without me, chaos. Now the chaos has come anyway. And Mubarak must go.

Five days of rage on the streets of Cairo, Alexandria, Suez and dozens of other cities have transformed the way Egypt sees itself. For years, they said it was impossible. The regime was too powerful, the masses too apathetic, the security apparatus too ubiquitous. Like eastern Europeans trapped in the Soviet Union’s cold, pre-1991 embrace, they struggled in the dark, without help, without hope. Movements for change, such as Kefaya (Enough!), were brutally suppressed. Courageous dissidents such as Ayman Nour were harassed, beaten and imprisoned.

Yet all the time, pressure for reform was rising. Every day, higher prices, economic stagnation, poverty and unemployment, political stasis, official corruption and a stifled, censored public space became less and less tolerable. Every day, impatience with the regime’s insulting insouciance bred more enemies. Hatred seeped like poison through the veins of the people. Until, at last, in five days of rage, as if as one, they cried: “Enough!” And now, Mubarak must go.

Fittingly, Egypt’s youth led the way against the old order, using not guns or bombs but the arsenal of 21st-century information technology: social media, mobiles, texts and emails. The Paris mob of Bastille notoriety became, through peaceful evolution, the flash mob of Tahrir Square. They espoused no leaders. They wrote no plans. In fast-moving, separate but interconnected street offensives, they out-thought, outfoxed and outran the police.

With the once omnipotent security forces looking beatable, Egyptians of all backgrounds rose to join the fight: students, trade unionists, women, rights activists, Islamists and, crucially, the great workers’ army of Egypt’s employed and unemployed. Here, truly, was people power in all its magnificent might. Here was democracy in the raw. Here was the legitimacy of an Egypt freed of its old fears and suddenly alive to its changing destiny. In five days of rage, they seized control of their country’s future. And so, inevitably, Mubarak must go.

It is clear that Mubarak does not share this view and that the army, for now, is backing him. The 82-year-old’s television appearance on Friday night only underscored how little he understands the causes of the tumult. Like Tunisia’s recently deposed president, Zine El Abidine Ben Ali, Mubarak chided the demonstrators, insisted stability was all and shifted the blame to others, sacking his cabinet and promising another. He gave no assurances about this autumn’s elections, made no mention of his intentions or those of his purported heir, Gamal, though his selection yesterday of his old henchman Omar Suleiman as vice president hinted at a new succession strategy, and offered no vision of reform. He made plain he would not go.

This impasse is not acceptable, this deadlock cannot be sustained. It is damaging to the region, to Egypt’s western friends and, most of all, to Egypt itself. All concerned now have an urgent duty to think afresh.

For unreformed Arab regimes that look to Egypt for leadership, the message is clear. Several, following Tunisia’s example, have been rattled by attempted uprisings. In Jordan, in Yemen, in Algeria, a common theme emerges: demands for inclusive, open, honest governance and for economic opportunity and social freedom.

These demands may only be addressed by a root-and-branch reconstruction of governance. As a string of UN reports in the past decade has illustrated, the Arab world is being left behind by other regions, whether the benchmark be literacy, educational achievement, private enterprise, healthcare or women’s rights. These trends, if allowed to continue unchecked, promise only more days of rage, more instability and more grief. A good start would be the renunciation by Arab leaders of objectionable dynastic succession plans that, in Libya, Syria and elsewhere, have seen favoured sons follow, or be selected to follow, their fathers into power. In Egypt, Gamal Mubarak must state publicly he will not seek the presidency once his father has gone.

For western countries, particularly the US, the paymaster of the Mubarak regime, a radical new approach is also now required. In recent days, Barack Obama has increased the pressure on Mubarak. But he has not, as yet, withdrawn his personal support. That should change.

Obama, David Cameron and EU leaders must tell Mubarak that his time is up, that the appointment of an interim government of national unity, the release of political prisoners, the suspension of emergency laws and free and fair presidential and parliamentary elections is the only way forward they will support. Other autocratic Arab regimes must hear the same message. The west’s postwar dance with Middle Eastern tyranny is ending. That it would end in tears and teargas is wholly unsurprising. But end it must. The regimes must reform from within, with help from without. There is no sane or safe alternative.

For sure, it is a fraught proposition. But what great reform moment is not? In place of Mubarak and men of his ilk, western leaders fear the rise of militant Islam, the ascendancy of groups such as Egypt’s Muslim Brotherhood, and a general loss of influence and stability in a Middle East made free for democracy. As Palestine fractures under the weight of revelations about secret negotiations with Israel, as shaky Lebanon faces a new Hezbollah-led government, and as Iran crows over what it hopes will be the domino collapse of the “apostate” regimes, the US takes fright at a world unravelling beyond its control.

Courage and vision are required in Washington as well as Cairo. The US, Britain and other western governments that have wrongly valued stability above freedom should take inspiration from the brave people of Egypt. They have shown the way. In five days of rage, they overcame their fears, broke with the old ways and made a glorious, chaotic yet purposeful lunge for a future full of hope for all. They made a reality of democracy. Now they must make their choice freely. So, first, Mubarak must go.