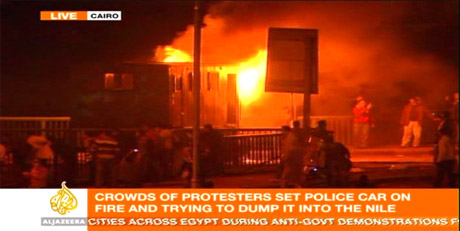 A nighttime curfew has begun in the Egyptian cities of Cairo, Alexandria and Suez, after a day where thousands of protesters took the streets, demanding an end to Husni Mubarak’s 30-year presidency.

The curfew was implemented on Friday on the orders of the president, along with an order that the military take charge of security, amid violent clashes occurred between police and protesters.

Mubarak, “as commander in chief, has declared a curfew in the governorates of Greater Cairo, Alexandria and Suez from 6pm to 7am starting on Friday until further notice,” state television announced.

The president “has asked the armed forces, in cooperation with the police, to implement the decision, and maintain security and secure public establishments and private property,” it said.

Al Jazeera’s Ayman Mohyeldin, reporting from Cairo said that a building belonging to the ruling National Democratic Party was set ablaze along with several police vehicles.

Rawya Rageh, reporting from the port city of Alexandria, said that protesters were defying the curfew.

“The situation remains very tense, and many are still out here, openly defying this curfew.”

According to the Associated Press, thousands of protesters have stormed the foreing ministry, and state television building in Cairo.

Dozens of people were also wounded as security forces fired rubber bullets, tear gas and water cannon at the crowds and baton charged them.

During the clashes, plain clothes security forces also dragged off protesters. At the Fatah mosque in central Ramses Square, several thousand people were penned in and teargassed.

Egyptian military vehicles meanwhile, were sighted on the streets of the capital, and protesters had previously chanted slogans calling for the army to support them, complaining of police violence during clashes in which security forces fired teargas and rubber bullets.

Protesters reacted positively when an armoured vehicle with troops showed up, possibly indicating that it belonged to the military.

“The army is a respected establishment in Egypt, and many feel they need their support against what they see as excessive force by the police and security forces,” our correspondent in Cairo said.

However, Husni Mubarak ordered troops to back up police as they struggled to control crowds who continue to flood the streets of Cairo and other Egyptian cities.

But in a sign of escalating tensions, fires and thick black smoke have been seen across parts of Cairo.

Friday’s demonstrations were by far the biggest of four consecutive days of protests by people fed up with unemployment, poverty, corruption and the lack of freedom under Mubarak.

“This protest is not going to stop. They won’t and can’t trick the people again and give us some lame concessions. Hosni has to go,” protester Mohamed Taha said after fleeing a police attack.

Some held banners saying: “Everyone against one” and chanted “Peaceful peaceful peaceful, no violence.” Others threw shoes at and stamped on posters of Mubarak.

As clashes intensified, police waded into the crowds with batons and fired volleys of tear gas.

Mohamed ElBaradei, the former head of the United Nations’ nuclear watchdog and an opposition leader in Egypt, was briefly detained by police after he prayed at a mosque in the Giza area but he later took part in a march with supporters.

The countrywide violence has so far left seven people dead.

In response, the government had vowed to crack down on demonstrations and arrest those participating in them. It has blocked internet, mobile phone and SMS services in order to disrupt the planned demonstrations.

Before Egypt shut down internet access on Thursday night, activists were posting and exchanging messages using social networking services such as Facebook and Twitter, listing more than 30 mosques and churches where protesters were to organise on Friday.

Meanwhile, the United States says the situation in Egypt is of “deep concern” and is calling on Egyptian authorities to enact reforms and allow peaceful protests and open communications.

PJ Crowley, a state department spokesman said on Friday that Egypt must respect the “fundamental rights” of its people and avoid violence.|

He also said reform is vital to the country’s long-term stability and security, and urged the government to view its people as a partner and not a threat.

It is far from a foregone conclusion that the protesters will force Mubarak out. They face two key challenges, said Amon Aran, a Middle East expert at London’s City University, told Reuters news agency.

“One is the Egyptian security apparatus, which over the years has developed a vested interest in the survival of President Mubarak’s regime. This elaborate apparatus has demonstrated over the past few days that it is determined to crush political dissent,” he said.

“Another obstacle derives from the fact that, so far, the protesters do not seem to form a coherent political opposition.

The popular outcry is loud and clear, but whether it can translate into a political force is questionable.”